Historical films always, inevitably, raise questions of authenticity, particularly when they relate to such politically sensitive topics as the Gulag and the Second World War. Watching the film I had mixed responses. In terms of the depiction of the labour camp itself the makers have done an excellent job. The crowded barracks, the prisoners’ brutal exertion in the mines, their desperate attitude towards food all seemed to ring true with many survivors’ memoirs.  The domination of camp life by the tattooed, card-playing “professional criminals” – who are nonetheless hungry for stories from the better-educated political prisoners – is particularly well done. These hellish early scenes are strikingly similar to some of Danzig Baldaev’s sketches (pictured here) which have recently come out in an excellent volume from Fuel. 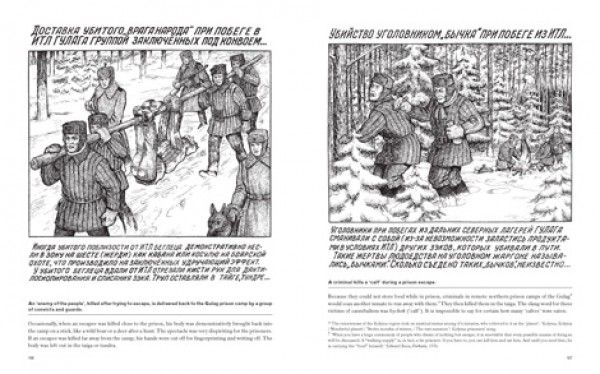 Drawing by Danzig Baldaev. On the left, an 'enemy of the people', killed after trying to escape, is delivered back to the Gulag prison camp by a group of convicts and guards. On the right, a criminal kills a "calf" during a prison escape.

But the question of authenticity for many viewers will go deeper. Was it possible for prisoners to escape? And could they survive? Archival records show that escape attempts did happen; and the Gulag authorities were concerned about the increase in escape attempts in 1941.[1. See Vladimir Kozlov’s introduction in V. A. Kozlov, ed., Istoriia Stalinskogo Gulaga: Konets 1920-kh–pervaia polovina 1950-kh godov, vol. 6: Vosstaniia, bunty i zabastovki zakliuchennykh (Moscow, 2004), 25–100, p. 50; Anne Applebaum, Gulag: A History (London and New York, 2003), p.359.] As the film effectively demonstrates, it was not just the guards who kept the prisoners in check, but also the harsh environment. Whether or not they could have made the long and treacherous journey which makes up the bulk of the film is questionable. The movie is based on the memoirs of Slavomir Rawicz, a Polish survivor, whose story has been challenged. The book sold over half a million copies and has been translated into 25 languages.[2. Hugh Levinson, “Walking The Talk?,” 30 October 2006.] After his memoirs came out in 1956 Rawicz was both accused of fabricating an impossible story, and championed as a hero. In an early review, a geographer took him to task for writing an account of his journey which, he claimed, was contradicted by the topographical realities of the region.[3. E. Shipton, “Fact- Or Fantasy?,” The Geographical Journal, 122, 3 (1956), 370-372.] In 2006, archival research for a Radio 4 documentary suggested that Rawicz had in fact been released as part of a 1942 amnesty for Polish prisoners, and the producer concluded that “[t]hese papers make it almost impossible to believe that Rawicz escaped, unless there is a case of mistaken identity.”[4. Levinson, “Walking The Talk?.”] Rawicz’s defenders are still vocal however, particularly in the wake of the film. On a “Slavomir Rawicz message board,” one contributor writes: “I too have a copy of The Long Walk Slav sent to me inscribed with his message: Never forget the precious heritage of freedom. I corresponded sporadically with him for two decades – from the early 70s when I first read his book and was so gripped by his story to some time just before he died. I still have (and cherish) all his correspondence […] I never for one minute have doubted his story.”

My purpose here is not to argue whether it was true or not, but a slightly different one. Why does this survival story appeal so much, despite all the doubts? Why did Rawicz’s memoir produce such a loyal following during his lifetime? And what does the need to make a film of his story now, seventy years on, suggest?

In many ways the original memoir fitted into Cold War mentalities: it not only gave an unremitting picture of the cruelty of the Soviet prison camp system, but also documented the power of individuals to overcome the brutality of a “totalitarian” state. In the memoir, the escapees are Poles, Balts, and an American. It is certainly possible that foreign prisoners, cherishing a clear sense of homeland to which they could aim, were more likely to try escape, but the ethnic composition of the groups also helps create a powerful narrative: representatives of small, vanquished countries (and accompanied by an American) ultimately triumph over the Russian goliath.

Although the film-makers gave themselves some licence to adapt the plot and the characters this aspect of the narrative is preserved in The Way Back. In the film, a Russian prisoner is added to the band of escapees, but unlike the others he is not an innocent victim, instead a hardened criminal with no qualms about wielding his knife. One of the few sympathetic Russian characters in the original memoir, the wife of a camp commander, who helps Rawicz with the escape plan, is removed entirely from the film version.

The Russian government is sensitive about the country’s history, as Medvedev’s creation of a “commission against historical falsity” two years ago showed. The seventieth anniversary of the outbreak of the Second World War led to a bitter polemic over Stalin’s role, in which Medvedev accused the Baltic and Ukrainian governments, and also the EU organizations which backed them, of revisionism, saying that there could be no debate at all over “who started the war, which country killed people, and which country saved people, millions of people, and which country, ultimately, saved Europe.”[5. Luke Harding, “The war? Nothing to do with Stalin, says Russia’s president, Dmitry Medvedev,” The Guardian, 31 August 2009.] However inadvertently, this film will perhaps revive Russian concerns that an outside world wants to see them only as aggressors, never as victims. It will be interesting to chart responses to The Way Back which was released in Moscow on 3 February.

This entry was posted in Films, Gulag, Soviet Era 1917-1991. Bookmark the permalink.

6 Responses to The Way Back: Cold War Emotions Revived?