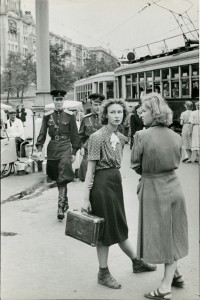 Over the Easter weekend, I was reading The Guardian and came across a full-page photograph taken by Henri Cartier-Bresson on a visit to the Soviet Union in 1954. This stunning photograph was used the following year as the front cover of Life magazine.

To me the image is of a balmy Moscow day. Two pretty young girls are being eyed up by soldiers. People are waiting for a trolley-bus to take them home. A man is selling ice-cream, or maybe kvass, in the background. The interpretation offered by Peter Conrad is rather different. He writes: ‘[T]his image is heavy with documentary evidence about the grim Soviet experiment in regimenting civil society and reforming greedy human nature: the shabby clothes of the women or that battered case, the stoically shuffling queue for the trolley, the soldiers who should have had their minds on surveillance of another kind. The sky is webbed with wires, the pavement is stained. Does that topless column prop up a statue of Lenin exhorting the masses or Stalin terrorising them? Luckily the photograph decapitates it.’

Conrad  does acknowledge that there is something more to the photograph, continuing: ‘What’s left, when you erase the political subtext, is a small Russian rite of spring that prematurely undermines communism.’ He too, then, sees the soldiers eyeing up girls, but he reads it in terms of resistance; romance, fashion, flirtation are inevitably a subversion of Soviet values. Is there really a political subtext here, I find myself wondering? If we were told that this was a photograph of another post-war society – Paris, say – wouldn’t we read it in a very different way? Why is everything Soviet inevitably political? Other Guardian readers obviously had similar questions, one commenting ‘Peter Conrad appears to be suggesting that communism is undermined by a picture of soldiers perving up a couple of young women. So much the better for communism, is all I can say to that.’

Other photographs from Cartier Bresson’s trip to Moscow are no less engaging. In Gorky Park a stylish woman in pristine white, floppy hat, and high heels is reading a magazine, whilst in Sokoloniki, adults and children dance. We see people at work and at leisure – fishing and playing chess, rapturously watching a circus, at worship in a church. There are, of course, political questions to be asked. A foreign photographer was surely not let loose to wander the capital unchaperoned. The Soviet government would have had its own agenda; it had an interest, for example, in showing the outside world that churches were open and working. Certain locations were more likely to display the capital in a flattering light. Shopping in the capital’s central streets – as in other countries – was surely a very different experience from those struggling to get by in the suburbs, or indeed in a provincial city. Not many women would have the means to go shopping with the abandon and delight we see in ‘A Hat‘.

Looking through these photographs I find myself wondering the extent to which they differ from the images we find in Soviet newspapers and publications. Some feel quite familiar: the muscular bodies of participants on parade at Dinamo stadium; a man at work on the assembly line at the ZIS factory (though would he perhaps have been fully dressed on the pages of Pravda?). One difference struck me, though, the number of old people. In Soviet visual culture the head-scarved middle-aged women and the lined, white-bearded men Cartier-Bresson catches so beautifully in some of these images were, I think, a less frequent sight, despite the growing prestige attributed to the older generation in the post-war period.[1. Stephen Lovell, The Shadow of War: Russia and the USSR, 1941 to the Present (Oxford: Wiley-Blackwell, 2010)] I am also struck by the prevalence of uniforms. Conrad hints at this, suggesting they testify to the ubiquity of surveillance; but perhaps they serve more than anything as a reminder that this is a post-war, militarized, cold-war society?

I would be interested to know the responses of other people interested in the Soviet Fifties. On a slightly lighter note, I am also intrigued by this photograph from Cartier-Bresson’s 1973 trip to Leningrad: Is the man sunbathing, and if so why is everyone else fully dressed in coats?!

11 Responses to Cartier-Bresson in Moscow