On a recent trip to Chicago, I spent several hours wandering around a current exhibit at the Art Institute: “Windows on the War: Soviet TASS Posters at Home and Abroad.”

It was, in a word, fascinating.

The story behind the collection is that during the Second World War, TASS had a group of artists, both visual artists and writers, who produced nearly daily monumental posters.  If you think you know Soviet poster art from the war, these will still surprise you.  The images were put up in the windows of the TASS building, and some were used more widely.  In 1997, the Art Institute discovered a bunch of these posters hidden in a closet, and this exhibit grew out of it.

There are far too many images to talk about in a quick blog post–but you can look through them all at the museum’s website.  As the resident historian of things before the twentieth century, I’ll just post one image. 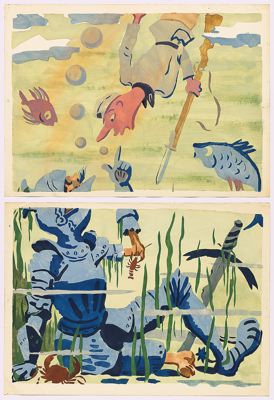 It’s a variation on the conflation of historical battles with the Second World War. Here, though, “Fritz” (the Nazi everyman who’s featured in a lot of the posters) is meeting one of the knights–his Germanic ancestor!–defeated by Alexander Nevsky at the Battle on the Ice.  I’ve always loved the ways that history gets used in Soviet posters, and this is really one of the more unusual ones, in part because it’s tied in with comedy, particularly in the verse that goes along with it (which you can see at the site in the caption, above).

Actually, that’s one of the most interesting things about this exhibit.  While certainly many of the posters have that high emotional content–we will avenge!–of many of the more famous posters, there’s also a LOT of comic art and writing–and a lot of making fun of Hitler and the Nazis. It puts a very different spin (to me, at least) on the Soviet reaction to and interpretation of the war.

Professor, University of Toronto, Department of History; Author of For the Common Good and Their Own Well-Being: Social Estates in Imperial Russia (Oxford University Press, 2014)
View all posts by Alison Smith →
This entry was posted in Digital Russian History, Nostalgia and Memory, World War II. Bookmark the permalink.