In my first post, I promised to blog about life on Russia’s roads in the eighteenth-century, and also about the “after-life” of the Russian Empire, as it is finding expression in the digital realm. Here’s something that combines a little of both.  Let me preface it by saying that this hasn’t been peer-reviewed, it’s based on what I understand as of now, and as such I look forward to your thoughts and corrections. 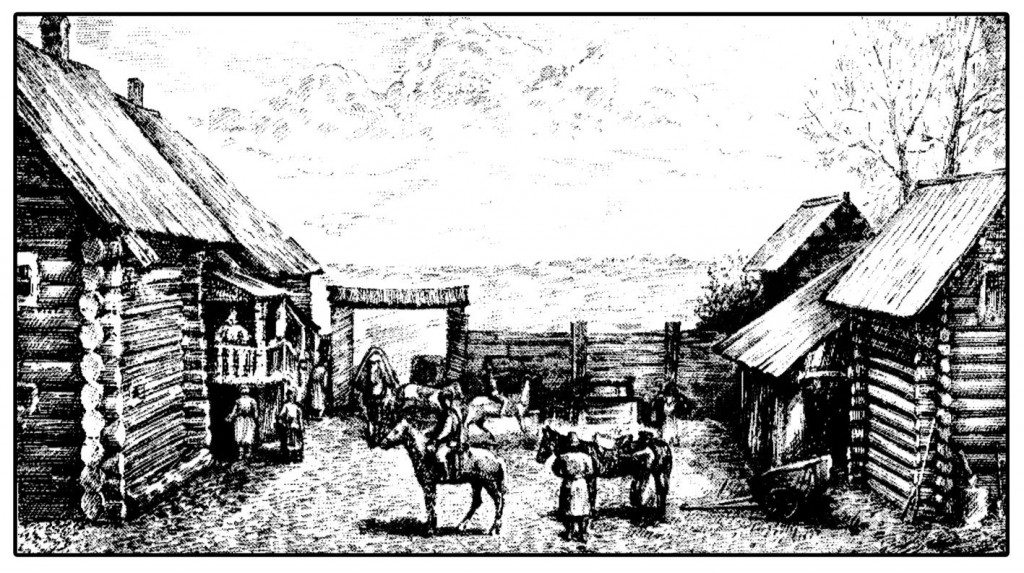 In the mid-18th century, the bustling town of Nizhnii Novgorod, located at the confluence of the Volga and Oka Rivers, was a major center of trade that drew travelers from all over the empire. All these people needed to eat; to purchase harnesses, saddles, and other riding gear when their old ones wore out; and of course to buy fodder for their horses and livestock. This raised the question of who should provision them : who had the right to open stalls and sell goods to travelers?

Registered local townspeople—local merchants for the most part—felt they had the monopoly. But the obligated post riders, or iamshchiki, who helped bring so many to Nizhnii in the first place argued they should be able to trade as well. In fact, they claimed, this petty trade in goods for travelers was their hereditary right by the charters and decrees of previous Tsars. And in a long appeal to their superiors at the Post Chancellery, they listed these commands and helpfully provided excerpts from them, from worn-out copies they themselves possessed. The Chancellery, in turn, took one look at this complex legal question and kicked it upstairs to the Governing Senate (the supreme legal instance in the Empire) for final adjudication. (Here’s a look at the beginning of that petition.) 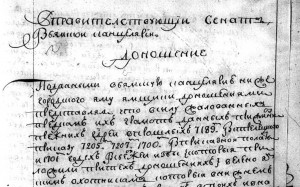 As was usual in such cases, the Senate (in turn) ordered its clerks to collect excerpts from all the relevant decrees—both those cited by the post riders, and those not—and to provide a summation of Russian law on this question. This it dutifully did—albeit without actually discovering or mentioning the laws cited by the post-riders. Instead, the Senate clerks took as precedent a number of other laws, passed by various Tsars and Emperors, starting with the great Code of 1649 and continuing into the 1750s. [1. This affair is RGADA f. 248, d. 5506, ll.172-211, esp. 173-184. The image here provided is from l. 173.]

What happened to those other decrees—the ones cited by the post-riders? Since the Senate’s investigation didn’t turn them up, one logical maneuver for the modern historian is to try to find them in the famously Full Collection of Laws (Polnoe sobranie zakonov), collated and published under the direction of Mikhail Speranskii, starting in the 1830s, and now represented (as Alison Smith has already shown us on this blog) in an impressive and incredibly useful online edition, overseen by the Russian National Library.

Alas, they aren’t there either. I guess they didn’t make the cut.

Which brings me to a question: just what is the Full Collection of Laws? Well, as historians have known for a long time—but as is all too easy to forget—it’s not a complete collection of Russia’s laws, as Speranskii, et. al., would have found them. Speranskii—as he explains in a long essay, describing the principles behind his work—believed it was his task to sort through the mass of Imperial decrees that made the shelves of Russia’s chancelleries groan, and pull out those which possessed a permanent, principled, and general character. He wanted, in other words, to separate “law” as it is understood by modern jurisprudence from the individual orders and “judicial decisions” [sudebnye resheniia] that had been made by the Imperial government in the course of governing. [2. M. M. Speranskii, Obozrenie istoricheskikh svedenii o svode zakonov, 2nd ed. (St. Petersburg: Tipografiia II Otdeleniia Sobstvennoi E.I.V. Kantseliarii, 1837), esp. 128-141.]

However enlightened and sensible this choice may seem to us now, it was also an immense and somewhat arbitrary act of power, whose consequences were felt differently in different parts of society. Although historians often present the early modern period as one of increasing centralization, standardization, and codification, this “trend” (such as it was) was often overwhelmed by powerful countervailing tendencies. In the 17th and early 18th centuries, people expected to be judged by the branch of government that otherwise governed their lives. “Whoever ‘was administered’ [byl vedom] by a Chancellery, was also under its jurisdiction,” as Olga Kosheleva notes—at least until the matter reached the Senate. [3. O. E Kosheleva, Liudi Sankt-Peterburgskogo ostrova Petrovskogo vremeni (Moskva: O.G.I, 2004), 47; see also Nancy Kollmann’s illuminating discussion in Nancy Shields Kollmann, “Law and Society,” in The Cambridge History of Russia, vol. 1 : From Early Rus’ to 1689 (Cambridge, UK: Cambridge University Press, 2006), 559-579. ] And despite constant attempts at consolidation—Peter’s replacement of the Chancelleries by Colleges, the often short-lived careers of common courts such as the Nadvornyi sud—that was how it stayed, up until the Provincial Reform of the 1770s.

This is, of course, why the post riders appealed to the Post Chancellery to hold up their rights. It’s also why they themselves kept their own legal archive. Since Russia had no parlements [4. Throughout early modern Europe, parlements were not legislative bodies but rather local institutions who kept and recorded law.] to keep and record law in general, small-town Russians had a remarkable tendency to stash away decrees they could cite when it suited them. And since every decree was (in theory) the word of the monarch, as passed down by his representatives, it was, in a sense, “law.” Much of the drama of the old Russian courts, one suspects, lay less in the interpretation of statutes than in the politicking over which ones applied.

Which brings me back to the Full Collection of Laws, and its place in the memory of Imperial Russia. There is of course no question that Speranskii’s collection is a massive contribution to Russian history, as well as a major event in the history of Russian law. It contains all sorts of historical gems—up to and including official orders to stuff the memory of the Pugachev revolt into the memory hole, as Alison has pointed out—and as such has launched and will continue to launch a thousand historical inquiries and interpretations. It will do so now more than ever, one suspects, since it’s so dang easy to use on line.

All this should not obscure the fact, however, that this temptingly-named Full Collection of Laws itself would seem to stuff a fair amount of Russian law down the memory hole.  For the sake of argument, let me say the following:  The Full Collection of Laws is incomplete, not accidentally, but on purpose, not just in its digest form (the Svod zakonov) but in its edition of record. One may certainly have different opinions about Speranskii and his legal principles. I think most historians, myself included, have been somewhat in awe of the man, both as a scholar and statesman. Yet there would seem a sense in which the Full Collection of Laws is an anthology, a collection of Speranskii’s favorite laws, the ones that he found it possible to fit into the framework of his modern judicial sensibility. Backed by a gloriously produced Imperial paper edition—and now by a wonderful digital version—this legal edifice is understandably a historians’ favorite, as well.

Yet the post riders’ laws—somewhere elided and forgotten, except by them and the archive they created—have reminded me that there remain many reasons to be wary of the Full Collection. I suppose one of the dangers of the digital age we live in is that the things that always were easy to access, in part because they were backed by power, will now become even more so. Can seemingly scientific word clouds spun out of the Full Collection be long in coming? And yet the aura of digital edition should not make us mistake them for definitive—any more than being published by the Emperor’s Own Chancellery should have.

PS: Ah yes, about those post riders who wanted to sell food. Someday I hope to tell that story, but for now let me simply say that the Senate, having compared all the laws it could find—those pulled together by its own clerks as well as the charters provided by the post riders—decided the whole thing was a contradictory mess. It kicked the question over to Catherine’s Commission on Commerce—whose final decision I have not discovered.

8 Responses to My Favorite Laws