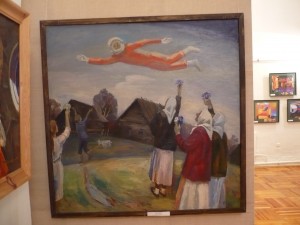 Goodbye to my previous project

Having finally finished my biography of Yuri Gagarin (The Cosmonaut Who Couldn’t Stop Smiling: The Life and Legend of Yuri Gagarin, due out in March with Northern Illinois University Press) I’m trying to figure out my next project. This blog presents some very preliminary thoughts about a topic that may occupy my mind for the next number of years. I welcome any thoughts and suggestions.

Extending aspects of my previous book into a later period, I want to investigate the political and cultural significance of transnational manned space flight in the 1970s and 1980s. The beginning point of my project is the Apollo-Soyuz mission in July 1975, which marked both the beginning of a new era of transnational space exploration and an important shift in the political and cultural meanings associated with space flight. Aleksei Leonov, the cosmonaut who participated in the mission, said he was struck again and again during the flight, that “cooperation means friendship, and friendship means peace.” (Hoover Institution and Archives, Association of Space Explorers 1983-85, Box 1, Folder 1.) Cliched statements, for sure, but not, I believe, devoid of genuine belief.

New ideas about collaboration and cooperation – which often clashed with Cold War imperatives and heroic national narratives of space conquest from the previous era — envisioned spaceflight as a way to forge a global consciousness and community. The tradition of “Cosmism” in Russia –with deep roots that both anticipated and antedated the age of manned space exploration — lent itself to a cosmic vantage point that encouraged people to think about humans in ways that transcended traditional political boundaries. It was also a perfect complement to the spirit of the 1970s, initiated by the first Earth Day in 1970 and inspired, in part, by a new breed of environmentalists such as the British James Lovelock who imagined the Earth as a kind of space ship — and its human inhabitants as just one minor component of a far larger cosmos. His book Gaia, from the Greek for Mother Earth, captured the spirit of the age. An amalgam of ideas that had crisscrossed many national boundaries, it was inspired in part by the ideas of the Russian cosmist and geochemist Vladimir Vernadsky and also by images from the Apollo missions. (James Lovelock, Gaia: A New Look at Life on Earth, Oxford University Press, 1979).

Meanwhile, astronauts began discussing something called the “Overview Effect.”  Mirroring ideas that had long been a staple of the Russian cosmist tradition, the Overview Effect described the euphoric feeling of universal connectedness experienced by many space travelers. Frank White presented a number of such experiences in The Overview Effect: Space Exploration and Human Evolution, Houghton Mifflin, 1987. To many of those who experienced such feelings, either personally or vicariously through reports about manned space missions, space exploration seemed to be a way to transcend Cold War hostilities and to forge a new kind of global community. These were the sorts of people who had various Overview Effects at college parties as they listened to David Bowie’s 1977 Major Tom: “This is Major Tom to ground control. I’m stepping through the door. And I’m floating in a most peculiar way. And the stars look very different today.”

So far as I know the joint missions have received little attention from historians of space flight, culture, or Détente. Research into the history of space flight has tended to focus on the space race as an outgrowth of Cold War competition, an adjunct to the military applications of space, or as a symbol of national pride and identity.

While approaching the history of space flight from a new perspective, the research also provides insight into the development of global – and not merely national – forms of consciousness. As historians of transnational history have noted, writing a global history requires human subjects who view themselves as part of a global community (just as writing a national history requires the emergence of people who considered themselves to belong to an abstract national community as opposed to their family, village, or region). The transnational object in this case was the space rocket or space station. Those technologies connected nations involved in each mission and in the process helped participants transcend national as well as stratospheric borders. (On transnational history see “AHR Conversation on Transnational History,” American Historical Review, December 2006: 1441-1464.) 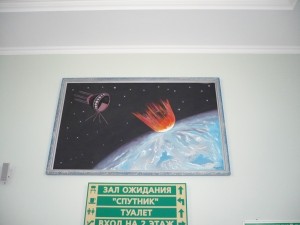 Of course, manned space flight continued to be sponsored by two national powers — the Soviet Union and the United States — who continually injected those flights with national as opposed to transnational meanings. Yet the Soviet Union, more so than the United States, was eager to showcase the potential of space as an arena for transnational cooperation. Through the late 1970s and early 1980s, the Soviets sponsored a series of flights on which non-Soviet citizens flew (mostly from the Soviet near-abroad of fellow communist countries but also involving a Frenchman.) Those flights, though certainly used by the Soviets to promote socialist unity and opposition to capitalism, also transcended conventional Soviet Cold War propaganda and constituted an attempt to use space exploration as a way to avoid the terrifying logic of Mutual Assured Destruction. 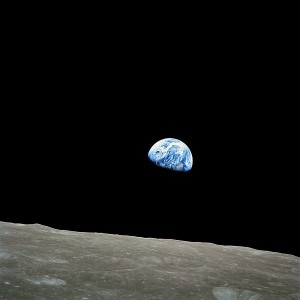 In sum, joint missions sponsored by the Soviets – and to a lesser extent by NASA — were one way that new ideas about global citizenship emerged. With the launch of every manned mission, citizens shifted their gaze from the local and national to the international and celestial, a shift in perspective that conveyed a sense of the fragility of the earth and the damage wrought by human interventions. National borders and boundaries on maps appeared irrelevant from space. As an instrument of peace, rather than war, the spaceflights also rejected, implicitly and sometimes explicitly, the notion of nuclear mutual assured destruction – and of space as an arena for the playing out of Cold War military competition.

A potentially key figure in my story is the retired cosmonaut Aleksei Leonov, a prolific writer, businessman, and artist. Beginning with his first walk in space in 1965 and his participation in the 1975 Apollo-Soyuz mission, Leonov sketched out visions of international collaboration in his art and propagated those ideas in various political and business settings. His musings mirror what NASA astronauts such as Rusty Schweickart dubbed the “Overview Effect.” One of Leonov’s astronaut counterparts, Alan Bean, also devoted quite a bit of his Earth-bound energies to artistic representations of space, inspired by the iconic image of the view of Earth from space, “Earth Rise.”

In addition to memoirs and published sources I have gathered material from a rich collection of documents contained in the Hoover Institution and Archives. Entitled the “Association of Space Explorers,” the document collection recounts attempts by a group of cosmonauts and astronauts — led by Apollo 9 mission veteran Rusty Schweickart — to promote international cooperation during Ronald Reagan’s presidency. As the group put it during a meeting in Cernay, France, in October 1985: [We] have seen the Earth from a vantage point that transcends political differences, and are thereby in a position to inspire all of us to work together more creatively on issues of mutual concern.” The Association itself grew out of Détente and the Apollo-Soyuz mission in 1975, “that memorable handshake in space,” as the organizers put it. The group of cosmonauts and astronauts – at a time of increasing Cold War tensions – had profound faith in “the potential of this group of individuals to influence the consciousness of our time…perhaps unique in the history of explorers. (Hoover Institution and Archives, Association of Space Explorers 1983-85, Box 1, Folder 1.) 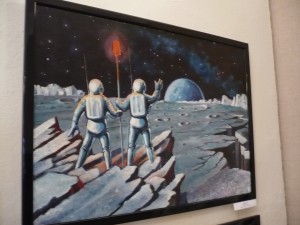 The effort, however, provoked heated opposition, both among committed Cold Warrior politicians in the United States and the Soviet Union and within the astronaut and cosmonaut corps. The astronaut Walter Cunningham, among others, “cringed at the presumption that we collectively or individually gained a better perspective on humanity’s problems solely by virtue of having seen our planet from above the atmosphere.”And he feared that enemies of the United States, including the Soviets, would exploit the effort to promote an anti-nuclear agenda – precisely at a time when the Reagan administration was seeking to upgrade nuclear missiles in Western Europe. “Our experience did provide a platform, an audience and a (generally undeserved) credibility on a wide range of unrelated topics,” he wrote to Schweickart in March 1984. “The responsibility to avoid exploitation of this ‘bloody pulpit’ should not be taken lightly…I believe it is misleading our Soviet counterparts to imply that there is strong, broad-based support among our group for the formation of this organization as you envision it. Such a Pollyanna approach reminds me of those who don’t want the President to publicize past Soviet treaty violations because it makes it awkward for their continuing advocacy of new treaty negotiations. Rusty, it is difficult to accept your statement that you have no political agenda in all this. You are too closely identified with anti-nuclear and disarmament positions as well as the Jerry Brown faction of the Democratic Party.” Another astronaut, when asked about the ASE, thought it was a good idea, but he feared “the communist state would organize the cosmonaut side…to reap any propaganda or political advantage…The cosmonauts are not free agents! I wish they were.” (Hoover Institution and Archives, Association of Space Explorers 1983-85, Box 1, Folder 2.) These are intriguing claims by the astronauts – and they make me wonder not only about the agency of the cosmonauts, but also about something that many of the American astronauts took for granted: their own status as free agents capable of changing the course of the Cold War.

As of now, I am investigating in detail the effort by ASE to transcend the Cold War divide during the first Reagan administration. It was one of those key moments in transnational history – and one I hope might shed new light on the meanings of globalization and the policies and practices of Detente.