Imagining the Petersburg-Moscow Road in the Late 18th Century

How do you imagine what a road was, historically?  Quite often, histories of transport describe histories of surfaces: the evolution of building techniques, say, from wooden planks to macadamized stone to modern asphalt or concrete. 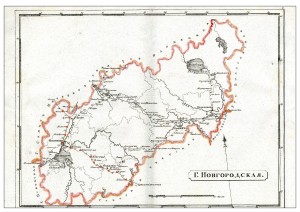 Alternatively, roads are presented as transportation networks or ‘scapes’: that is, as a series of junctures (like the famous Moscow Metro Map) that permit traffic to flow from stop to stop to stop. Yet however important construction- or traffic-based approaches are, one thing they don’t capture is the way that human community is arranged in support of roads, and why. What are the social ‘moorings’ that sustain roads: that service their surfaces and also their travelers, and thereby make transportation along their elaborately constructed landscapes possible at all?

I’ve been trying to visualize an answer to this question, for one of Russia’s most famous roads: the Petersburg-Moscow corridor, in the late 18th century.  In what follows, I sketch some initial results; I’d be happy for your thoughts on it.

One place to start visualizing a road, of course, is with a standard traffic map, like the one presented in thumbnail size above. It’s from the Pocket Postal Atlas of the Whole Russian Empire, published by the Empire’s Cartography Department in 1808. [1. Karmannyi pochtovyi atlas vsei Rossiiskoi Imperii, razdelennoi na Gubernii s pokazaniem glavnykh pochtovykh dorog (St. Petersburg: Sob. Ego Imp. Velich. Dep. Kart, 1808), p. 7.] (If you click it, it will expand.)

This map shows the postal system of Novgorod Province in central Russia. Lines indicate ‘roads’ (conceived as traffic routes). Small circle dots mark postal stations, where Russian officials along with paying private travelers could expect to hire fresh horses and local drivers for their carriages, and also to find food, fodder, shelter, and water. (Numbers in between the stations mark distances in versts, a unit of measurement approximately equal to a kilometer). Visualized in this way, the road is a rather thin and lacy structure, that occupies very little space. On the left hand side of the first map, I’ve used orange pentagons to mark the road that interests me here—the Petersburg-Moscow road—as it passed through this central Russian province. Here’s a blow-up of this area, showing it in more detail. 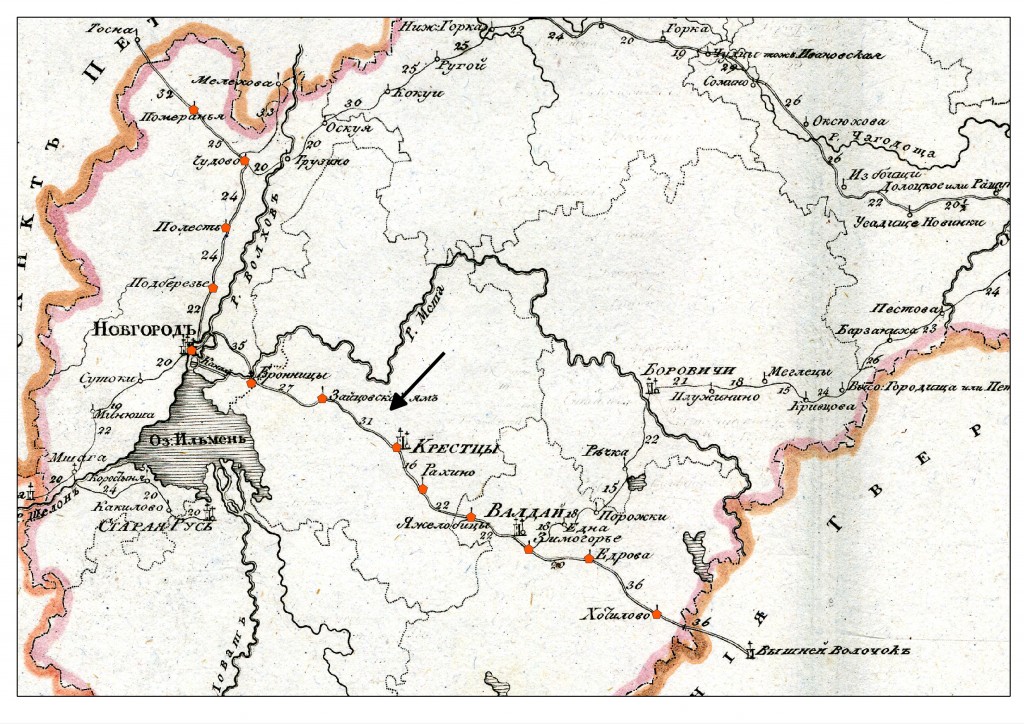 But who or what supported this system? Who serviced and manned these stations, and what sort of space did this society occupy? The Imperial Cartography Department did not (to my knowledge) publish maps of this system, but the government as a whole collected data on it. And using some archival data from Russia’s State Historical Archive—and various freeware Geographical Information System applications—I’ve tried to project the society of the road onto this map.

First, a little more context on how this road came into being might be useful. Almost as soon as Petersburg was founded, in 1703, Peter the Great and his advisers began to create a system of postal stations to connect the new capitals. This social infrastructure of rest stops, provisions, horses and laborers—the dots or stations with which the 1808 postal map is punctuated—did not spontaneously arise. Rather, it had to be brought into being by generations of Imperial Russian officials, who spent much of the next century trying to make the system work, variously inducing and compelling their subjects to serve the stations.

At the most general level, supporting Russia’s postal roads was an obligation that lay upon the entire tax-paying population. Anyone on the great “revision” tax rolls—both peasants and townspeople—paid a special, postal tax, taken in theory for the upkeep and maintenance of roads. But at the heart of the day-to-day operation of the system lay a special social group known as the iamshchiki (‘post riders’ or ‘coachmen’, we might say in English, although women and children were part of this obliged class as well.) These iamshchiki were granted agricultural lands and paid small per-trip fees. In return for these wages, their villages were supposed to staff and maintain the postal stations, providing drivers, horses, mounts and wagons in turn. (In the tax jargon of the day, 28 iamshchik “souls,” that is adult males as counted by the census, made up a unit of taxation called a vyt’; and each vyt’ had to provide 3 horses and a driver, for periodic service as managed by an elected elder.)

Mapping the space occupied by this society can be rather tricky. Generally speaking, the Imperial Russian archival records I’ve found so far tend to keep track of coach communities and their obligations only in airy statistical terms: that is, as dry counts of the number of “souls” assigned to a station (or, alternatively, in terms of the number of horses). But I recently found one early-nineteenth century document (produced by a special postal reform committee) that describes not only the stations themselves but the actual locations of the iamshchik communities that supported them. [2. “O iamskom soobshchenii v Rossii. Vedomost’ o iamshchikakh po raznym guberniiam,” 1804, RGIA f. 1289, op. 1, no. 130, ll. 264-281.]

In the original archival file, this geographical information is presented in a statistical table. Using a variety of geographical tools now freely available on line, however, I’ve projected it on to the Novgorod Postal map. 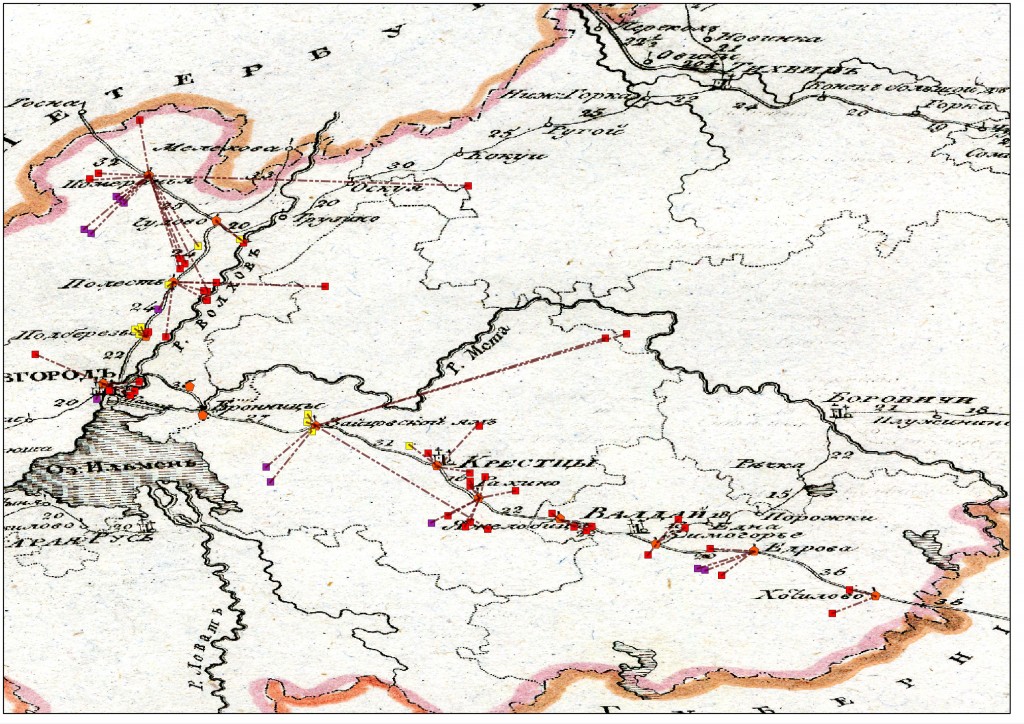 Here, the stations are marked, as before, with orange pentagons. With a combination of red, yellow, and purple squares, I have then marked the location of various villages, where the iamshchiki, the “coach wives” (iamshchich’i zheny) and their families lived. (These communities have names, but for space reasons I’ve left those labels out). Finally, I’ve used dotted lines to show the station to which the “souls” of each village were ‘pripisany’ – that is to say, which station it was assigned to support.

As further examples, somewhat easier to read, here are blow-ups of the northern and southern halves of this system (click to expand). 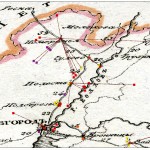 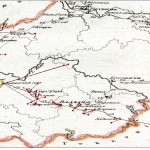 Last but not least, there are two blow-ups of individual stations, below (Pomeran’e in the North and Rakhino in the lower middle; click and they’ll expand).

How did I make these maps? First, I took the 1808 postal map and stretched it onto a contemporary geographical coordinate system, using a great tool provided by Harvard called Map Warper. I then used various geographical finding aids—Google Maps, Geo-Search.Ru, and a few others—to locate the often obscure villages described in my archival file. Last, I took QGIS—an open source Geographical Information Systems program that’s very easy to use—and used it to plot the villages on my geo-referenced map. 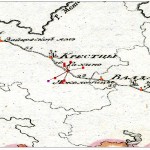 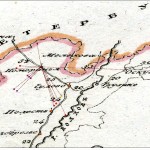 What, then, do these new pictures mean? Well, I’m just getting started thinking about it. I’d be grateful for your perceptions. I should also note that this is an early draft, and I expect there are some errors. Not surprisingly, it’s often difficult to locate old Russian villages, and to distinguish among several villages of the same name. (How many villages called ‘Bor’ are there in Russia?) At this stage, the locations I feel very certain about are marked in red; those that are guesstimates are in yellow; and in purple I’ve marked stations whose actual location I don’t yet know.

Still, I do have some preliminary hypotheses about what this new map helps us see. First of all, the Petersburg-Moscow road was not a narrow line connecting neatly spaced stations, roughly 25 kilometers apart. Rather, it was (among other things) a system of obligation that extended many kilometers to each side of the road, and connected (in just this one province) some 70 villages to service its 13 stations. These villages ran up and down the side of the road itself, but also off some distances into the countryside East and West.

Over half of these villages (37) were more than 10 kilometers from the station they served (that is, at least an hour’s ride, more like two with a wagon). In the case of some stations—Pomeran’e (see thumbnail) in the far North, Zaitsovo in the middle—supporting villages could be as far as 40 kilometers away. Although I haven’t yet figured out how to show population density in this visualization, it is true that the stations themselves tended to have the largest populations. Thus, for example, Rakhino (pictured in thumbnail) had 344 souls registered as residing in the station itself. But another 433 lived in its 8 satellite villages, including 73 at Dolgii Bor, about 35 kilometers away.

Compared to the land mass of Russia overall, of course, even this expanded zone was still a thin line. And one major failing of this current map is that I haven’t yet plotted other, non-coach communities and villages on to it. Even so, I still think that what we learn from this map is that when people traveled the Moscow-Petersburg road, in the late 18th century, they were not simply traveling point to point on a narrow pathway, but through an extensive social world fashioned to support this road.  Quite often and literally, the ‘road’ was the entire landscape, as far as the eye could see.

John Randolph is Associate Professor of History at the University of Illinois.
View all posts by John Randolph →
This entry was posted in Digital Russian History, Imperial Russia, Russia in World History, Uncategorized and tagged iamshchiki, imperial russia, roads. Bookmark the permalink.