The Case of the Dead Cheese Master, Part III: The Emperor and the Palace 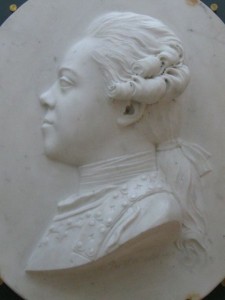 The Swiss cheese master was an employee of the palace of Gatchina at the time of his death. He’d been hired just a couple of years before, at a time when Gatchina—both the palace and the village—were undergoing some significant changes that had to do with its owner, the newly crowned Emperor Paul, the supposed “crowned psychopath,” the most autocratic of Russian autocrats whose intemperance got him murdered and replaced by his angelic son.

Paul was actually a far more complicated figure, as even those who were very critical of him admitted. According to one such account, “he was really benevolent, generous, of a forgiving temper, ready to confess his errors, a lover of truth, and a hater of falsehood and deception, ever anxious to promote justice, and repress every abuse of authority, especially venality and corruption.” Such a paragon of virtue ought to have reigned long and well. But the same author goes on: “unfortunately, all these good and praiseworthy qualities were rendered useless to himself and to the empire by a total want of moderation, an extreme irritability of of temper, and an irrational and impatient expectation of implicit obedience.”  (“Reminiscences of the Court and Times of the Emperor, Paul I of Russia, up to the Period of his Death. From the Papers of a Deceased Russian General Officer. Part I,” Frazer’s Magazine (August 1865): 236-237) 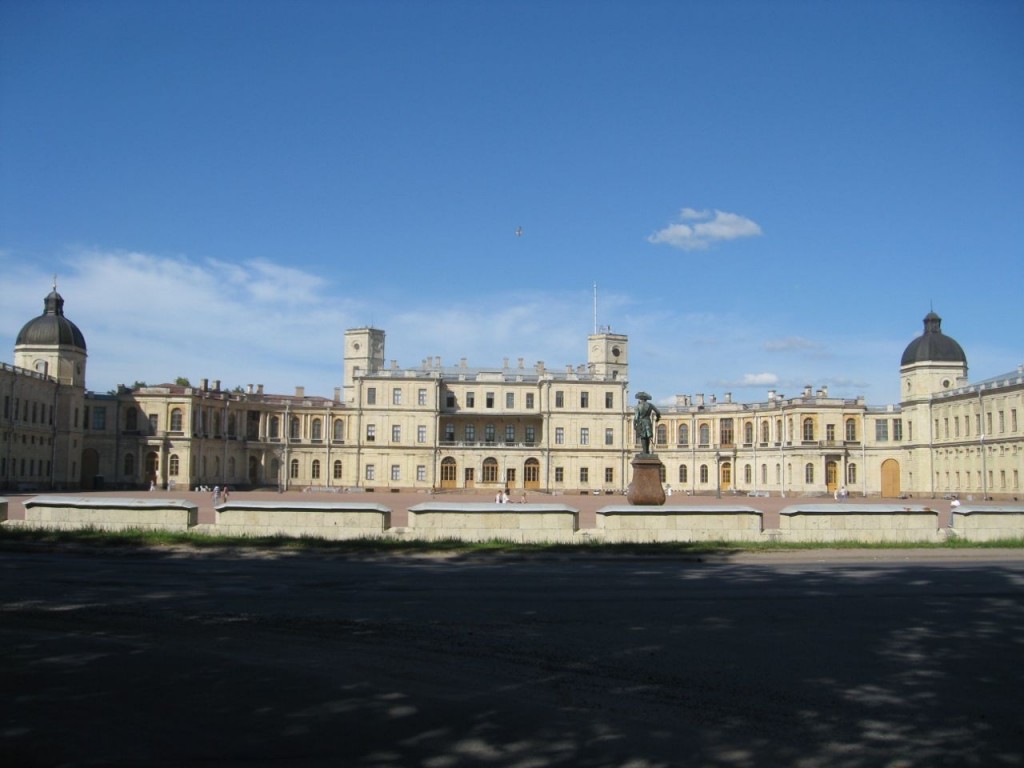 The main palace building at Gatchina

Even before Paul came to the throne, these two sides of his personality were on display at Gatchina. The early history of the lands around the palace at Gatchina are a bit fuzzy, as different sources claim different histories of ownership of the area. All agree, though, that shortly after Catherine II (the Great) seized the throne in 1762, the area became the property of Grigory Orlov, Catherine’s favorite, and one of the major players in the coup that had placed her in power. Within a few years, Orlov began to build a palace on his new property. It was designed by the architect Antonio Rinaldi, one of the many palaces around St. Petersburg he designed around this time. Orlov clearly saw the area as a retreat from the stresses of the capital—at one point he even invited Voltaire (whom he had never met) to come stay there (Voltaire politely declined). After his relationship with Catherine ended, Orlov even found himself living in a kind of internal exile at the palace and on its extensive grounds. 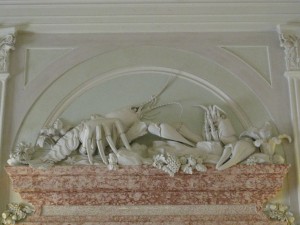 Decorations in the White Hall at Gatchina–lobster! (No cheese.)

Catherine bought back the estate after Orlov’s death in 1783, and shortly thereafter gave it as a gift to her son, Paul, on the occasion of the birth of her granddaughter Aleksandra. The bequest gives a sense of how much Orlov had already developed the area: she granted Paul “the estate of Gatchino with its existing home, with all of its furnishings, marble things, armory, greenhouses, materials, and with 20 villages belonging to the estate… with their cultivated and uncultivated lands.” A later account suggests that the whole bequest consisted of 41 separate small villages, home to 3031 men and 2919 women. (PSZ vol. 21, no. 15808 (August 6, 1783); Stoletie gorod Gatchiny 1796 11/XI 1896 g. (Gatchina, 1896), 5) The gift was therefore a significant one in terms of monetary value, but also one that carried significant emotional baggage. After all, Orlov had been a leader of the coup that ended in Paul’s father’s death—for Catherine to grant Orlov’s lands and palace to Paul could be seen as trying to make amends for that long ago action, or as rubbing his nose in the long ago affair.

In any event, Paul took to Gatchina. He and his second wife, Maria Fedorovna, had previously lived most often at the palace of Pavlovsk, but Gatchina was farther away from the cluster of palaces outside St. Petersburg. That distance suited both Catherine and Paul. Paul’s very existence had always been a challenge to his mother’s rule, but his life had also ensured that the Romanov line would continue. By 1783, however, Maria Fedorovna had given birth to two sons, both of whom were prospering—Paul could well feel superfluous in the line of inheritance, and thus far less secure. Soon after arriving in Gatchina, he began to build fortifications to protect the area from attack from St. Petersburg, and by most accounts life there came to seem “more like a military camp than a town.” (Stoletie, 8; also L. V. Ruzov, Iu. N. Iablochkin, Gatchina. Istoricheskii ocherk (Leningrad, 1959), 14).

That militarized life is certainly what Gatchina has been most known for, and it is its distance from the capital and its fortified mien that later led Alexander III to move his family there after his own father’s assassination. At the same time, however, Paul also treated the palace like the large landed estate it also was—he tried to play the role of the enlightened landlord who could improve his estates and bring prosperity to his subjects. He reorganized the administration of the palace lands and villages. In 1793 he gave the lands a sel’skii ustav, a kind of regulation of village life that aimed to improve the lives of his serfs. It saw the origins of local poverty as “disorganization,” and saw regulation and organization as the keys to economic improvements. (And it also showed Paul to be very much in sync with current practices—such ustavy had become common parts of noble oversight of their lands.)

Paul also went beyond the goal of reorganizing his peasants’ lives by founding or encouraging the founding of a number of other economic developments in and around Gatchina. A mill was built in 1792. A cloth factory was built in 1795 (and was still running in 1959). Other workshops that produced suede goods, shoes, and gold embroidery and braids appeared. (Stoletie, 32-33; Ruzov, Gatchina, 18) And in 1796, a cheese factory (syrnyi zavod) was founded.  According to a centenary history of Gatchina, the decision to found a cheese factory went like this:  “in 1796 Pavel Petrovich, still the heir to the throne, came up with the idea of creating in Gatchina a dairy farm on proper bases. With this goal a specialist, the Swiss Enni, was invited to serve His Imperial Highness in the role of farmer, and his duties were laid out in a contract  for three years, written in the German language, as were many documents of that time.” (Stoletie, 34) Enni, however, was not the dead cheese master. His replacement, referred to in the history as “the Frenchman Teneli” but in archival documents as the Swiss Tengli, was the real deceased.

Next time, who he was, and what he did.

3 Responses to The Case of the Dead Cheese Master, Part III: The Emperor and the Palace