The archival file from the Gatchina Town Administration that records the case of the dead cheese master includes three official documents—only three—that attest to his life before and during his tenure at Gatchina. Two of the documents give a sense of how he might have ended up in Russia. First, there is a passport given to him in 1790: “François Tingeli de Marcens au Canton de Fribourg en Suisse de la paroisse de Nuirens conduit quatre vaches, et deux chêvres a Besançon.” Second, there is a letter from the Marquis de Froissard-Bersaillin, attesting that he bought an excellent cow from one M. Tinguely. 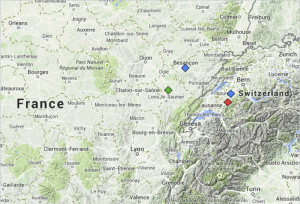 Places in France and Switzerland mentioned in Tinguely’s documents (map from maps.google.com)

These two documents already give us a sense of Tinguely’s world before his arrival in Russia. François Tinguely (I’m choosing to use that name for his time spent outside Russia, as it seems to be the variant that has best survived as a surname) was from the village of Marcens (now Marsens, and indicated by the red diamond on the map), in the canton of Fribourg in Switzerland. His work, as indicated by these documents, was in the trade of cows and goats. This reference only makes it clear that he traded in dairy-producing livestock, not that he made cheese, but given his place of origin (Marsens is in the district of Gruyère, home to the most famous of Swiss cheeses), it isn’t too much of a stretch to think that he might also have been involved further in dairy production.

His work also clearly had him crossing borders, even if only local ones. The passport gave him authority to take his wares across the border from Switzerland to France, to the town of Besançon, around 150 km away (longer today by car). Perhaps that is where the Marquis purchased his excellent cow—or perhaps Tinguely stopped nearer to Bersaillin itself (indicated by the green diamond) on his way to Besançon.

So, in 1790, Tinguely was traveling locally, and trading in livestock. And somehow, only a few years later, he had established himself in Russia. That was obviously a far more extreme trip, and one of the mysteries of the file is how Tinguely came to undertake it. An account of the postal route from nearby Freiburg, Germany to St. Petersburg gives a sense of just how arduous such a trip was likely to be, with stops at many towns (and many more postal stations) along the way. 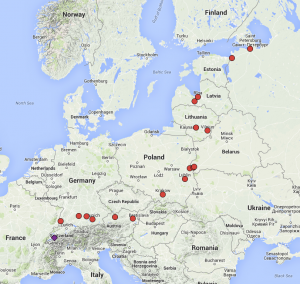 It’s possible that Tinguely went to bring livestock to Russia—there were certainly efforts at the time to bring in improved cattle breeds to Russia (and elsewhere), and Swiss cattle breeds were widely considered to be among the best in Europe. And furthermore, efforts in Russia (and elsewhere) to establish cheese-making operations demanded not only imported cattle, but also often imported cattlemen.

That seems to be exactly what had happened according to the third document, this one attesting to Tinguely’s presence in Russia. This one was dated March 3, 1794, and stated the following:

This attestation, given from His Imperial Highness’ Gatchina County Bureau to Franz Tengli, states that he came under the authority of the Gatchina [administration] on April 1, 1792 for cattle husbandry and to make  Swiss cheese; since that time he has fulfilled his duties with diligence, and with knowledge of his craft and honest behavior; today he has been freed by the [administration] by his wish to find a place to live where he wishes.

This is a very different sort of document from the earlier two. One is in its very nature. The first passport was one designed to allow Tinguely to cross a border. The second was essentially a reference from a satisfied buyer, probably used to gain employment later on. This document, though, spoke to the system of internal passports that had been developing in Russia for more than a century. As a foreigner, Tinguely did not belong to a peasant or a townsperson or a merchant society. But he evidently did need a document to show that he was allowed to be in Russia, that he had a job there, and that his place of residence was open to adjustment.

Of course, there’s another interesting point to make about this. It took a couple of weeks to identify Tinguely’s body, which means that he must not have been carrying these documents with him. That means that unlike other points in Russian history, Tinguely did not live with the fear that he might be stopped by police and documents demanded of him. That’s not to say that such an event wasn’t possible. M. V. Danilov recalled a prank he pulled in the 1740s that was based on the fact that the police did at times check people’s documents.  As he put it,

One day I happened to be in my apartment, sitting by the window, when I saw a young and pretty woman come out of the courtyard across from me… dressed like an Amazon. My friend Poluekhtov was visiting with me, and we talked in amazement that we had never seen such a thing on my street before, and deciding to pull a prank, we made badges out of paper as if we were policemen… and went straight to that courtyard from which our unknown Amazon came; jokingly, we asked the landlady of that house who was boarding with her, and “does she have a passport?”

Perhaps the practice was actually not that common. Or perhaps Tinguely trusted to his foreignness. In any event, travel about he did, for he also came to cover a fair bit of ground in and around Gatchina itself as he settled himself into his life there. Next time, the places he lived, worked, and, of course, died.

Professor, University of Toronto, Department of History; Author of For the Common Good and Their Own Well-Being: Social Estates in Imperial Russia (Oxford University Press, 2014)
View all posts by Alison Smith →
This entry was posted in The Case of the Dead Cheese Master. Bookmark the permalink.