The Case of the Dead Cheese Master, Part VII: The Things He Left Behind

Tinguely’s death, as sudden as it seemed to be, wasn’t one that had to be solved. It’s true that the exact circumstances of his death were a bit uncertain, but none of the later investigation ever seemed to suspect foul play. Despite this, the file about his death in the archives of the Gatchina town administration runs to nearly a hundred sheets of paper, including additional investigation by provincial authorities. Why so much? What were the questions that attracted so much attention? The major issue turned out to be not the circumstances of Tinguely’s death, but rather the provenance and later fate of the things and people he left behind. There were issues with his personal property. There were issues with the students and others he in principle employed. And in particular, there was one major question that took up much of the archival file: who owned the cheeses Tinguely left behind?

The first documents in the file emphasize the central role that things played in the story of Tinguely’s death. Nearly the first document is a report dated August 14, 1799 (RGIA f. 491, op. 1, d. 365, l. 4) from the local zemskii ispravnik (a rural police official), Collegiate Assessor Delin, and the head of one of Gatchina’s administrative units (an ober-amtman), Titular Councillor Unge. In the report, the two men presented the Gatchina town administration with lists of the property Tinguely had left behind. (A side note: this document makes the official court telling of the finding and identification of the body a bit more confusing. According to that document, the body was discovered on August 8, a first report was sent on August 10, and only on August 22 was there a formal report identifying the body. Clearly, though, the body must have been identified well before it was formally reported on.)

The first list (RGIA f. 491, op. 1, d. 365, l. 5) describes the things Tinguely left behind in a professional capacity. It was divided into two sections. First: “the kazennyi (state or treasury) livestock, cheese and other things that were in Tinguely’s control, according to the students living with him.” This state property was:

Second was a separate section: “in addition according to those same students Tinguely kept at General Ramburg’s estate of Novaia Ivanovskaia his own [property:]”

The first section here was relatively clear. All that livestock and all that cheese were the property not of Tinguely, but of his employer, the Gatchina administration. The Gatchina administration could do what it wished with that property, and, indeed, the file barely mentions it from this point forward. Unge, the ober-amtman, or the supervisor of one part of the larger Gatchina estate, noted in a report that he would continue to make cheese at Novoskvoritskaia, but otherwise the livestock and the cheeses seem simply to have been absorbed back into the larger property of the palace and its estate.

The second list comes from Tinguely’s unofficial work—he moonlighted making cheese for his own profit. Seeing these lists, it must have galled the palace administration that their official cheeses were mostly spoiled or cut, while Tinguely’s own cheeses were largely intact. But these cheeses also play two more roles in the story. First, they help solve a minor mystery about the circumstances of Tinguely’s death: not why he died, but why he died where he did.

Tinguely’s body was found near the village of Panovo, part of the larger estate of Ligovo. On a modern map, that village is just behind the runways of Pulkovo airport, but at the time this was well outside the capital city, and the property of a Baltic German nobleman and army officer, Count Fedor Fedorovich Buksgevden (or Friedrich Wilhelm von Buxhoeveden) (1750-1811). Buksgevden attended the Second Cadet Corps, and started his military service during the first (1768-1774) of Catherine the Great’s Russo-Turkish Wars. By the end of the century he had served in campaigns from Crimea to Sweden to Poland and had been granted medals and estates for that service.

Oddly, Buksgevden appears in another document pertaining to the case: the ukase in which Catherine granted Gatchina to Paul back in 1783 noted that the lands had been “bought by Us from the Counts Orlov” and were now “under the administration of Our Adjutant Buksgevden.” Buksgevden was instructed to hand over the properties to Paul’s proxy, but to keep watch over them until that proxy was sent (PSZ vol. 21, no. 15808 (August 6, 1783)). This kind of experience may help explain another part of his eventual fate: in 1797, during Paul’s reign, Buksgevden was briefly raised to even higher position, as the second general governor of St. Petersburg. The following year he was suddenly removed from his position. Though his estates remained his property, he left the country, living in German lands until Emperor Alexander I called him back to service in 1802. (A. L. Bauman, Rukovoditeli Sankt-Peterburga (St. Petersburg: Neva/ Moscow: OLMA-PRESS, 2003), 49-52.) 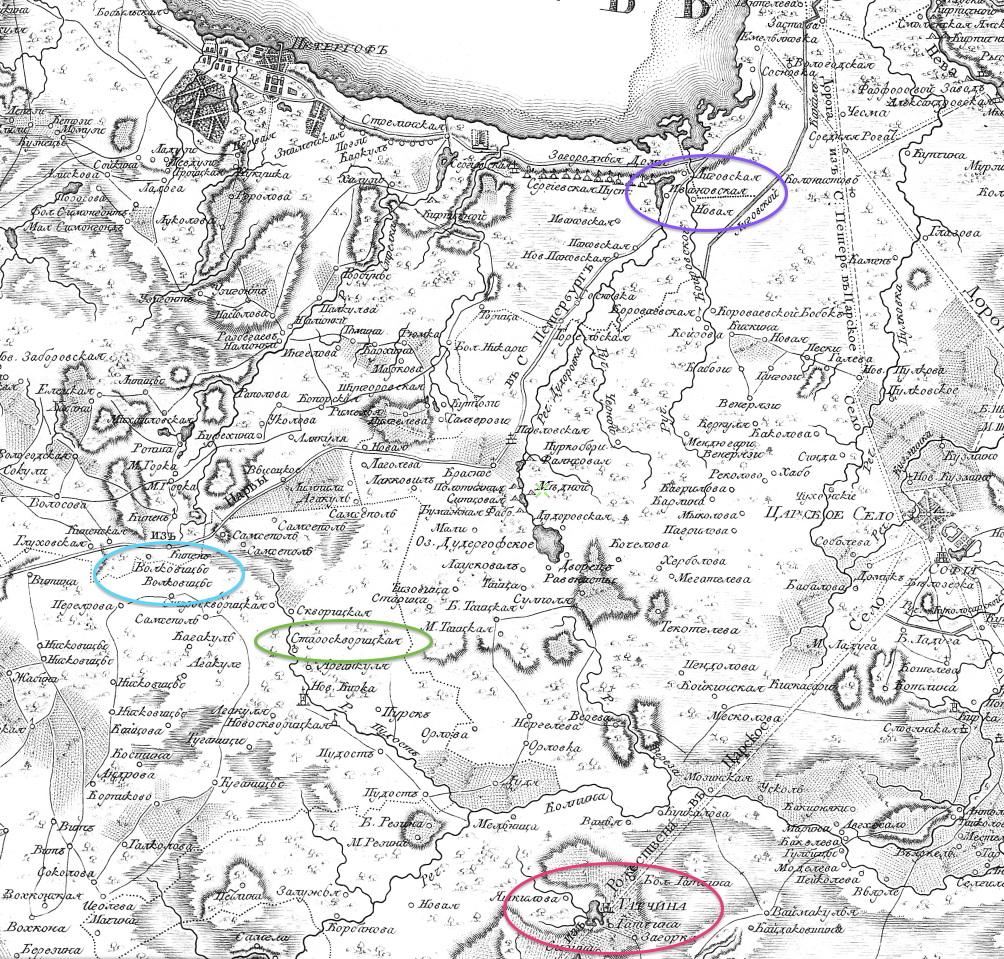 In any event, Buksgevden’s lands (circled in purple) were at some distance from Gatchina  (red) itself. A modern map counts the distance at around twenty miles. The distance was similar to Volkovitsy (blue), the village that Tinguely moved to several years into his stay, and probably an easier ride than to Gatchina itself, for both Ligovo and Volkovitsy were close to the main Narva/St. Petersburg road. Even so, twenty miles was not an inconsiderable distance, and explaining why Tinguely was there is hard to do without the appearance of the other cheeses.

Poring over maps from the end of the eighteenth century and beginning of the nineteenth, it’s hard to find a Novaia Ivanovskaia (or anything like it) near Gatchina. In the detailed map from 1810, though, an Ivanovskaia does appear in close proximity to Ligovo (it’s also within the purple circle). It seems beyond probability to think that Tinguely was spending time making cheese at yet another place on this map—instead, most likely, he died either on his way to or from this second place of work.

The cheeses at Novaia Ivanovskaia play a second role: they provoke a legal tussle over ownership. Were they Tinguely’s property? Or were they the property of General Ramburg, on whose lands they were at the time of Tinguely’s death?

Professor, University of Toronto, Department of History; Author of For the Common Good and Their Own Well-Being: Social Estates in Imperial Russia (Oxford University Press, 2014)
View all posts by Alison Smith →
This entry was posted in The Case of the Dead Cheese Master. Bookmark the permalink.

1 Response to The Case of the Dead Cheese Master, Part VII: The Things He Left Behind