Over the last couple of posts, I’ve thought a lot about Tinguely’s long-distance travel—of the ways he moved around between Switzerland and France, and then of how he might have made his way to Russia. It turns out that there’s just as much to say about the areas much closer to where he died. 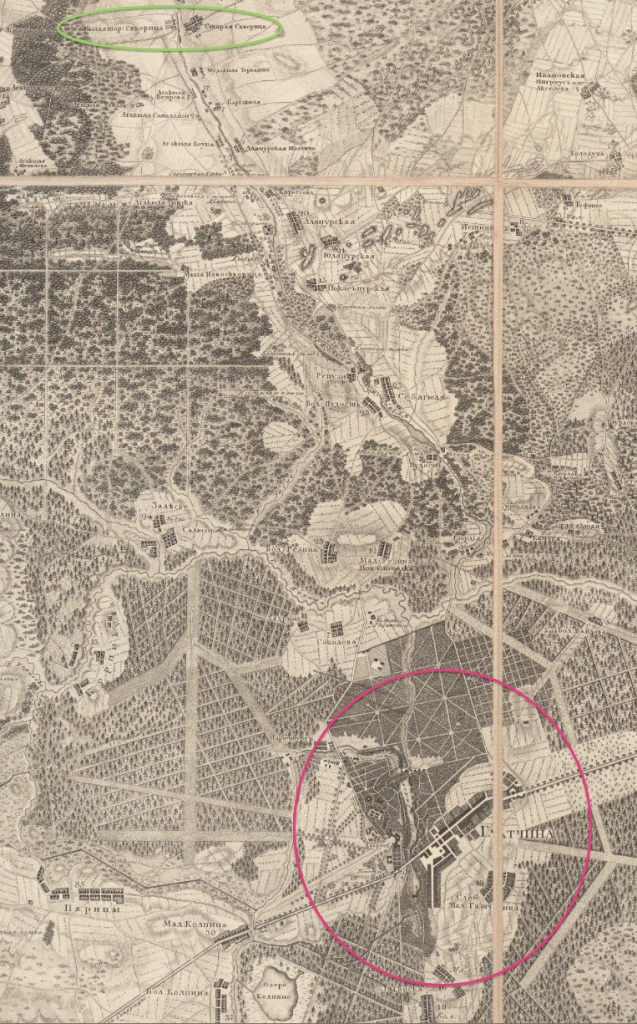 First of all, there’s the question of what it means that he was hired on to work for the palace administration of Gatchina. Gatchina meant multiple things. First, there was Gatchina palace, the one built by Grigory Orlov and given by Catherine to her son Paul in 1783. Then, there was the village of Gatchina (more normally Gatchino at the time we’re talking about) which abutted the palace grounds (the palace and village are circled in red on the map, and if you have an hour to spare definitely click through the link in its caption to look at the map in closer detail). And then there were the many smaller villages (20 according to the manifesto, but more according to other sources) that were considered to be part of the larger estate. In other words, figuring out where exactly Tinguely lived and worked during his time in Russia is more complicated than simply noting that he worked at Gatchina.

In some ways, the identification of Gatchina with the palace alone is the most narrow of the possible definitions. After all, the palace, as complicated a place as even just it was, was the smallest part of the larger lands. At the same time, however, it is also among the most powerful of those possible definitions. The alphabetical index to the (first) Complete Collection of the Laws of the Russian Empire, for example, files everything to do with Gatchina under the heading “palaces” rather than under any of its other possible classifications that could apply to it. And the governance of all these lands and places fell under the jurisdiction of the palace, and eventually of the Ministry of the Imperial Court. Only during the reign of Alexander III did jurisdiction over Gatchina, the former court village, move to the Ministry of Internal Affairs (which had jurisdiction over virtually all similar inhabited spaces). So the records of the palace administration are heavily intertwined with all the histories of these various villages, from Gatchina itself down to the tiniest ones.

Nor was even just the single village of Gatchina a simple place at this time. It underwent a major change during the years that Tinguely lived and worked in Russia. Paul became emperor in 1796, and not only did his reign mark a sudden shift in general policies for the empire, but a sudden change in the status of the lands around his Gatchina palace. In particular, nearly his first act as emperor was to make the village of Gatchina into a town—the manifesto announcing the death of Catherine and his ascension to the throne appeared on November 6, and less than a week later, on November 11, he gave the Senate a decree “renaming the village of Gatchina a town” (PSZ vol. 24, no. 17539). The decree was a short one: “Our own village Gatchina, having been renamed into a town, we order that its administration with the district belonging to it, remain on those very bases which up to now were established according to our authority.”

That decree implied consistency and continuity, but in reality, when a village became a town it triggered a cascading series of events that affected all its residents. This was something that had happened to hundreds of villages over the past twenty five years, starting with Catherine the Great’s organization of new gubernii (provinces) and uezdy (districts) through much of her empire. Her new districts all needed new district capitals, and there were not enough existing towns to go around. As a result, she turned village after village into towns. Most of these individual decrees gave not much more guidance for what that meant than Paul’s did some decades later. But in 1772, she released a decree to the Senate which gave guidance as to “the organization of the new-founded towns.” She approved new physical plans, and gave instructions for how those plans should be put in place; she approved new coats of arms for the new towns; she established town-appropriate administrations. And she noted that all residents of the now former villages who wished to stay there should now be named meshchane (townspeople), not peasants, and should now “trade and produce according to the example of other town inhabitants, each to their ability” (PSZ vol. 19, no. 13780 (April 2, 1772)).

Archival files from the Gatchina Town Administration (housed within the Ministry of the Imperial Court) bear out the idea that this was a real event that created real change. Not only did the new town’s former peasants suddenly find themselves transformed into meshchane, they were joined by many newcomers who sought town status. In the years immediately following Paul’s decree, hundreds of men registered as merchants or meshchane in the new town, coming from as near as Oranienbaum and as far as Arkhangelsk in the north and Cheboksary in the east (RGIA f. 491, op. 1, d. 315).

Of course, some of those former peasants may well have simply tried to remain peasants by joining one of the other village communities that were part of the larger Gatchina estate. The ukase granting Gatchina to Paul lists not only the estate of Gatchina, but also of two additional estates, Novaia Skvoritskaia and Staraia Skvoritskaia, as part of the bequest (PSZ vol. 21, no. 15808 (August 6, 1783)). Already in this law there’s something that marks this as taking place in this particular corner of the Russian empire. The word Catherine used for all three places was myza (мыза). The Dictionary of the Russian Language of the XVIII Century simply defines a myza as an “out of town estate, a dacha.” Dal’ earlier placed it more specifically around St. Petersburg, and etymological dictionaries explain why: the word derives from the Estonian mōis or more probably for the region from the Finnish moisio. In either case, the term reflects the fact that this area had (and would continue to have) a significant Finnish population, one that remained numerous enough that in 1834 Nicholas I approved spending 90,000 rubles to build a new stone church in Novoskvoritskaia to serve a Finnish (Lutheran) parish of 2941 people (RGIA f. 472, op. 2, d. 606, ll. 1-2, 9).

Nor was Finnish the only influence on the ways that the area was classified. Soon after taking possession of the lands, Paul ordered that they be organized into two “ober-amts” and one “unter-amt.” These were borrowed terms from German; an Amt was bigger than a single town or village, but smaller than a district; here the two “ober-amts” were based in Gatchina and in Novoskvoritskaia, and each encompassed a number of the surrounding smaller villages (33 in the case of the Gatchina ober-amt, 14 for Novoskvoritskaia). The unter-amt was based in another village, Volkovitsy, and included only one additional village (Stoletie, 15-6).

The document from 1794 that gave Tinguely permission to find a new place to live also mentioned which part of this large complex of estates he had lived in up to that point: Staroskvoritskaia. This was the farthest flung of the lands belonging to the Gatchina estate, off to the north east of the palace proper, along the Izhora river (circled in green on the map above). Although it’s not entirely clear why the cheese-making operation was established there, the map, even though it comes from a later period, may give a hint as to why; the lands around were largely open pasture, rather than cultivated lands, and thus perhaps perfect for grazing cattle. 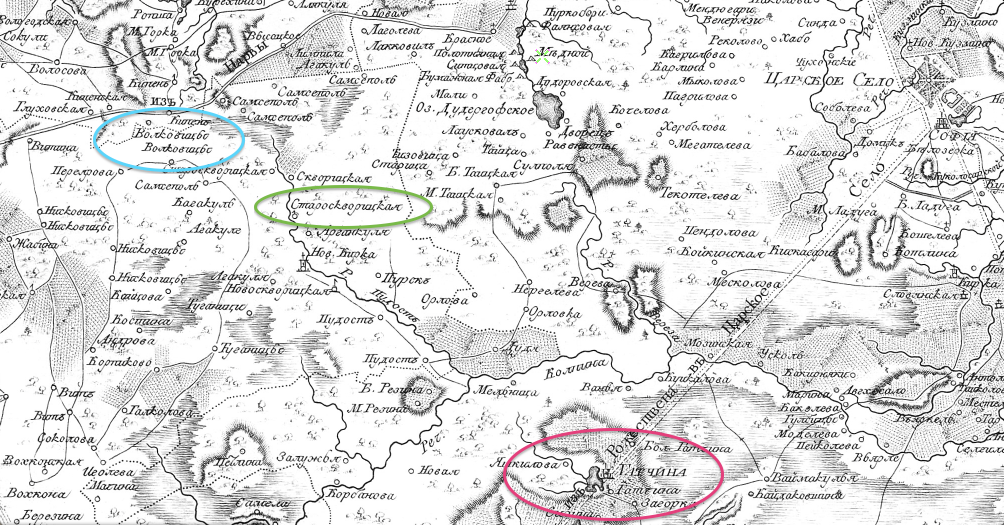 Even after Tinguely left his initial place of residence, he apparently stayed within the boundaries of the palace’s lands. The documents do not provide information about any possible interim places of residence, but at the time of his death he had moved a bit farther away from Gatchina itself, to Volkovitsy (circled in blue on this map). Why that move? Given the doctor’s finding that he suffered from “chronic over-consumption of alcohol,” perhaps he wished to move farther away from his overseers? Or perhaps the answer is something simpler, and tied to his economic life more generally—Volkovitsy had one advantage over Staroskvoritskaia: it was close to the main road between St. Petersburg and Narva.  And what did that road lead to? Among other things, the place of Tinguely’s death.

Next time, Gatchina and the place Tinguely died in the wider world of St. Petersburg province.