The Case of the Dead Cheese Master, Part IX: The Historian’s Confession

I could probably put this post off for another two weeks while I go a bit further into the story of the cheesemaster’s cheeses, but I’m eventually going to have to confess something so it may as well be now.

Well, perhaps confession is too strong a term. Or at least, I can start not with the confession, but instead with another story, or maybe a series of nested stories about the process of research. In a way, it starts with my time at the archives last summer, when I started exploratory research for a new project about Gatchina. My topic when I set off for the archives was really that broad—just, Gatchina, the palace, and Gatchina, the town. This rather vague idea started when I went to visit the palace, a bit on a whim, in July 2011. It wasn’t a complete whim; at that point, although I was primarily doing research for my soslovie book, I already had in mind a future research project on Empress Maria Feodorovna, Paul’s wife and widow, mother of Alexander I and Nicholas I. As I look back, I can’t remember exactly what set me off on that path, if it was something specific I’d read, or just the culmination of a number of references. A bit out of this general interest in that empress and her times, I’d visited Pavlovsk and Elagin Palace on earlier trips, and this time, I took the elektrichka out to Gatchina on a gorgeously sunny summer afternoon. 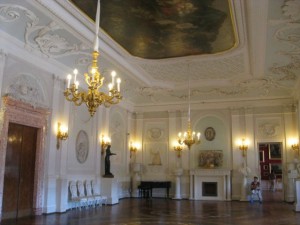 Gatchina Palace: view of the White Room, one of the grand 18th-century rooms

I was immediately smitten by the palace. Part of this has to do with the excellence of the museum display there, which really captures three distinct periods of the palace’s history. The central block of the palace houses grand eighteenth-century rooms that are all about opulent, imperial display of power and wealth. 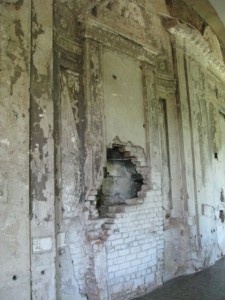 But then one side wing still shows the massive damage from the Second World War, and the other side wing holds the low, modest, cozy rooms of a later imperial family, the family of Alexander III (including his wife, the second Empress Maria Feodorovna, and of course his son, the eventual tsar Nicholas II). 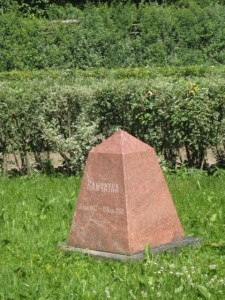 The garden on that side even has a couple of small stone markers that turn out to be the tombstones for the family pets—one named Kamchatka! If the central part, associated with the first Maria Feodorovna and Paul, is all about the autocracy, the wing associated with Alexander III’s family reads as something very different indeed, a place of Victorian comfort, not grand display.

I came away from the palace thinking of it more and more. Nearly from that point on, my interests shifted from a narrow focus on the first Maria Feodorovna. First I thought about the two Maria Feodorovnas, and tried to conceptualize a dual biography of these two empresses. Even as I thought about that, Gatchina remained the real draw. Finally, I decided that it was Gatchina itself, both the palace and the villages and town around it, that had truly captured my attention. Gatchina would be my new subject

And so, last summer I headed off to Moscow and St. Petersburg to see what there is in the archives. The answer, of course, is an enormous amount. In Moscow, at GARF, I started to read through file after file of letters and diaries of members of the Romanov family who lived in the palace. They made it clear that the cozy comfort of the later Romanovs was a bit of a façade, a veneer of domesticity over a reality that was still more stereotypically autocratic, in a rather inverse way: that cozy domesticity was made possible in part by the omnipresence of a militarized guard, always watching the imperial family, protecting it, but also making the palace a sort of prison.

In St. Petersburg, at RGIA, I found thousands of files waiting, files that touched on the management of the palace itself, of its grounds, of the administration of the town of Gatchina, and of its many inhabitants. I also found myself with limited options for ordering files—while I was there I was cut down to ordering two files (dela) a day. This turned out to be sort of a good thing. I was only there for three weeks. I knew that whatever I ordered was going to be the merest taste of what was actually in all the files. And so, I gave myself permission to order whatever sounded interesting, rather than attempting to be somehow comprehensive in my ordering.

Now, I wasn’t completely foolish. I very much wanted to order a file titled “Information on the costs of the table of Empress Maria Feodorovna when she eats alone,” but I did not, as it was unclear as to whether those costs took place at Gatchina. I also very much wanted to order a file about delivering a measure of grain to the Emperor to feed the pigeons (the emperor at the time being Nicholas I) but did not, because it was only one page long, which means it probably said, “the Emperor asked for a measure of grain to be delivered to feed the pigeons, and we delivered it” so there wouldn’t be much else there. But otherwise, if I saw a title like “On the disturbances created in the Gatchina park by the wife of NCO Farygin,” or, of course, “On the dead cheese master Tengle,” I gave myself permission to order the file just out of curiosity.

Now why is this a confession? It’s not a confession of sloppy method, though I suppose it could be read that way. I’ll admit, I have often wished I could write the methodology section of a grant application as simply “I will go to archives, find interesting things, and write about them.” I would acknowledge that as possibly sloppy method, and I’m never quite that blasé about planning my research. But this wasn’t intended to be a trip in which I came up with final answers for anything, rather a trip to suss out what kinds of things were in the archival files. In other words, I did what I meant to do.

No, the confession is this. I ordered the file “on the dead cheese master Tengle.” I read through it to understand its overall story, I took a reasonable number of notes, including copying down Tengle/Tinguely’s list of possessions twice because I’m kind of a sucker for household inventories. But I also had no real sense that I would ever really write about the file. I thought I might mention it, and it might be a fun anecdote, but that was it. I certainly never thought about writing a microhistory via a series of blog posts about it—honestly, I don’t think I would ever have thought up the idea had I not been in the middle of listening to the Serial podcast when I brought up the cheese master as an anecdote in class last fall. And so, my friends and readers, I must admit that my notes are incomplete. Over the next few entries, I’m occasionally going to have to end with “and then I don’t know what happened,” and sometimes that lack of knowledge will be because there was nothing else in the file, and sometimes it will have to be because I did not write down the ending.

I’ll note that this isn’t unique to this particular experience of note-taking, at least for me (and I certainly hope that I’m not the only person who’s faced this), in part because the writing process is so often very different from the researching process. It’s not that my notes are bad, exactly. It’s more that as I’m working in the archives or at the library, I think I know what I’ll be writing about, and take notes accordingly. But when I’m actually writing, I’ll often realize that the real story I’m telling is something very different, and the notes I took are helpful, but could have been more helpful if I’d only figured out that real story earlier.  A couple of years ago, while working on a new article, I went back to notes I took when working on my dissertation back in 1997-1998. I can’t count the number of times I got annoyed with my past self for not knowing what the me of the future would want to write about. I suppose that’s to be expected. And at least I’ve gotten better at this over the years—though as this confession shows, it obviously still happens.

And though this is a confession that some of the next entries may be a bit unsatisfying in their lack of resolution, I can at least say that I do know what the last entry will be, and it, at least, is complete. Or at least as complete as it can be based on this archival file, and a bit of additional work. So my confession may not require much forgiveness at all, in the end.

Professor, University of Toronto, Department of History; Author of For the Common Good and Their Own Well-Being: Social Estates in Imperial Russia (Oxford University Press, 2014)
View all posts by Alison Smith →
This entry was posted in Imperial Russia, Research & Practice, The Case of the Dead Cheese Master. Bookmark the permalink.