The Case of the Dead Cheese Master, Part X: Cheeses, Cows, and Contracts

The fate of the cheeses is one of the topics that appears only gradually in the archival file about Tinguely’s death—the documents are in part filed out of chronological order, and even if they were in stricter order, their ability to tell a straightforward narrative would be limited by the fact that later documents report on events that happened even earlier in time. So, a report on the cheeses is followed by a request to report on the cheeses, which is followed by a statement from the local court spelling out the circumstances of Tinguely’s death and his prior business arrangements.

Those prior business arrangements turned out to be the real issues in the case. At the time of his death, Tinguely had been working both for the Gatchina administration and on his own account. This is why he left behind a fair bit of livestock and several good (and many bad) cheeses that belonged to the palace administration, and far more good cheeses that were “his own,” and “kept at General Ramburg’s estate of Novaia Ivanovskaia.”

Soon after Tinguely’s death, one Gorev, the steward of Ramburg’s estate, came to the attention of the St. Petersburg land court with a claim that those cheeses truly belonged not to Tinguely, but to Ramburg. The issue was the rental agreement that Tinguely and Ramburg (General Major Aleksandr Ivanovich Ramburg) had signed prior to Tinguely’s death. These were its conditions:

This set of conditions is interesting on a number of levels. Obviously Tinguely, as a maker of cheese, above all needed milk.  Rather than contracting with Ramburg to buy milk, he instead contracted to rent the cows that would produce it, and in addition the hands to milk and care for them (the conditions are a bit unclear as to whether this meant he was to pay them a salary). This gave him the milk he needed, and was clearly enough for him to produce quite a bit of cheese only a couple of months into the arrangement—75 rounds, according to one of the records in the file. (It’s also worth noting the scale of this arrangement. The list of state property under Tinguely’s control mentioned he had the use of 64 milk cows (and three nanny goats). This side work was on an even larger scale.) 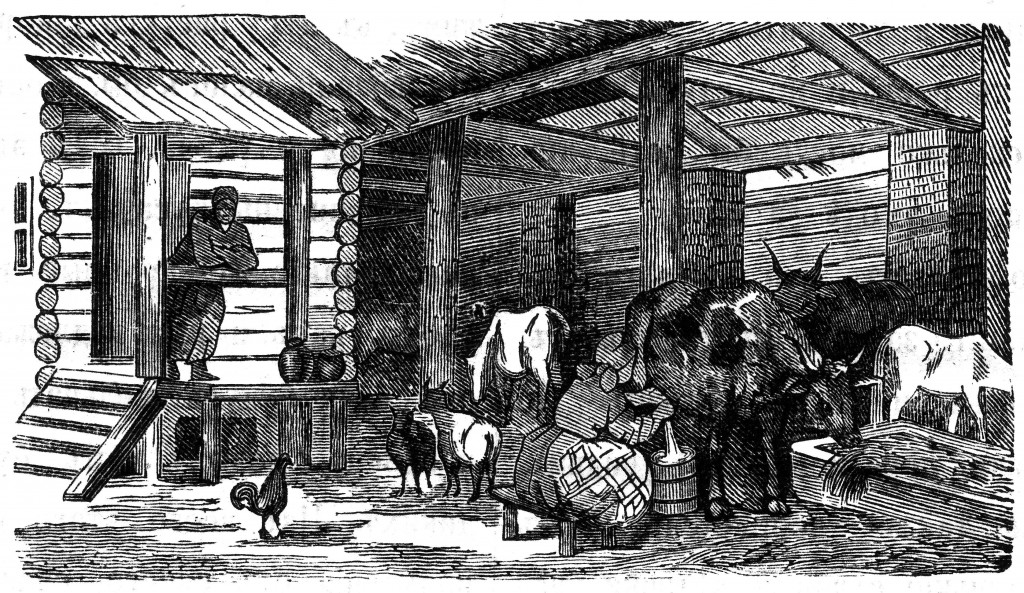 Frontispiece from Sel’skii listok 2, no. 24 (1861), depicting a peasant woman milking a cow. For more images from that year, see http://individual.utoronto.ca/aksmith/research/selskii_listok.html

Ramburg, meanwhile, also got rather a good deal out of this arrangement. First, he got a definite 100 rubles a month from his cows, no matter what they actually produced. A later file from the Gatchina archive, a series of reports on the workings of the Gatchina dairy farm, suggests that this was likely to become a good deal particularly at the end of the lease term. That series of reports shows cows calving through the spring, producing milk through the summer, and then gradually falling out of milk production during the fall (RGIA f. 481, op. 2, d. 2157). So, by the fall Ramburg would have a guaranteed income from his cattle while Tinguely would or would not still be getting much milk.

Second, Ramburg was guaranteed to end the summer with as many cows as he began it, not necessarily a given in a time of widespread cattle plague. And third, it seems that he hoped for something else—that those six serf men and women might come away from the summer not only having taken care of the cows, but also having learned something about cheese making. After all, he wanted not just the five hundred rubles of rent from the cows, but also the pot or vat for cheese making. That implied that he intended to make cheese on his own account, and although there was nothing in writing about teaching the peasants the art of cheese making in the conditions of the contract, it certainly seems likely that that was Ramburg’s hope.

After Tinguely died, however, this arrangement complicated the settling of his affairs. Ramburg said that although he’d been paid properly for June and July, he had not yet been paid for August at the time of Tinguely’s death on (probably) August 8. And so, he laid claim to some of those cheeses, as well as to some of the other property Tinguely had left on his lands.

This is where my notes let me down. The land court said that Tinguely’s property should largely go back to the Gatchina administration along with his other property. Ramburg refused to turn over the cheeses, or at least refused to turn over all the cheeses. Several more documents record the back and forth between the Gatchina administration and Ramburg, ending when most (I didn’t make a note of whether it was all) of the cheeses were turned over to Gatchina. The whole process took a while, such that on November 5, 1799, the Ober-Amtman, and Titular Councillor Unge, oversaw the part of the larger Gatchina property where Tinguely had worked, wrote to the Gatchina administration asking for permission to sell off all of Tinguely’s property as soon as possible, because the recent damp weather was causing it to spoil (I assume he means the cheeses were starting to spoil, but it could mean that his other property was starting to mildew, as well, sitting in an unused house near damp St. Petersburg) (l. 56).