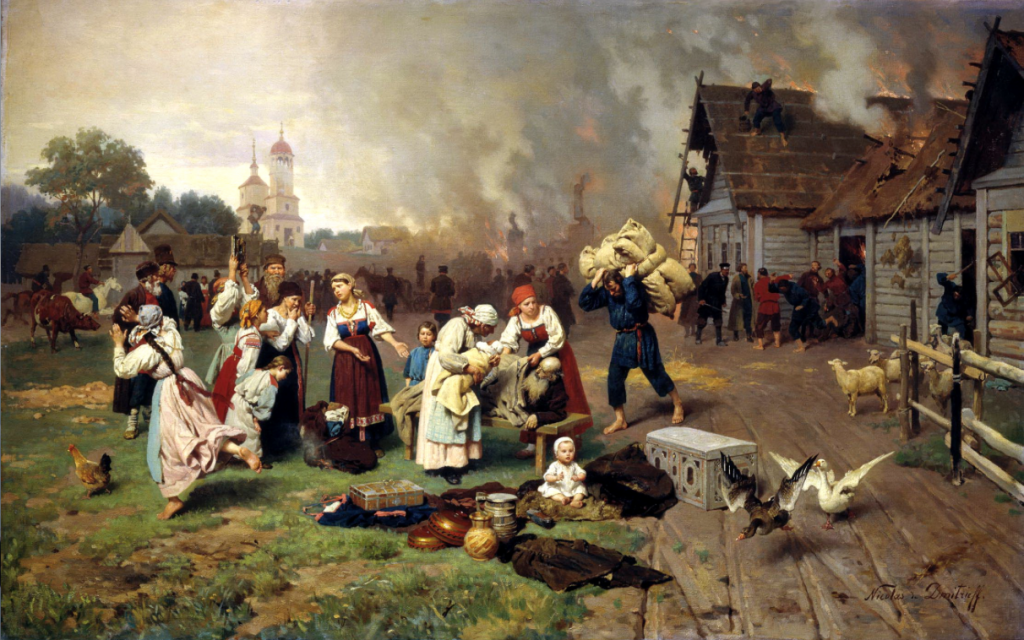 One of the first things I did when I started archival research back in the mid 1990s was look at the annual reports sent to the Ministry of Internal Affairs by provincial governors in the 1830s and 1840s. I was reading them looking for anything about food, but I remember being struck by the fact that they always included reports on local fire preparedness. I apparently didn’t take any notes about them, but I distinctly remember things like a report of the fire department of some district town being armed with two buckets and an axe, or something incredibly modest like that.

It made me think about fire and its possible destructive role in a new way. In fact, at one point I thought I might do a whole research project on fire, and then Cathy Frierson’s All Russia Is Burning! came out. So that was out (even if the pre-reform period could still use some (any) work). But fire appears in so many different places in the eighteenth and nineteenth century that it’s hard not to notice it.

Looking at reports and files on Ivanovo, the role of fire is thrown into even greater prominence, in ways both specific and general. On the specific side, there are accounts like those that the Vladimir Provincial News at times included as part of its regular column “news from the province.” I suspect these were only the most dire cases, and so when Ivanovo appears in the newspaper in 1855, it is for a rather terrible reason:

Ivanovo: on January 21 there was a fire in the home of the peasant Andrei Klimov caused by a spark that flew out of the iron stove; 25 pieces of calico and clothing were destroyed by it; and due to this accident the 30-year-old daughter of peasant Klimov suffocated from the smoke.

What a shock! A spark, a fire. From an iron stove, not a Russian one. (Was this a stealth warning against innovation in heating apparatuses?) Then, in the account, property damage of some considerable value. And only then the death of a nameless woman. What is one to make of that ordering of the story? It could be that my instincts have been warped by contemporary news programs that always put death first, and I shouldn’t expect the death of a peasant woman (and in Ivanovo at that time, a serf woman) to come first. Or was the life of the woman truly valued less than the cloth?

Fire becomes a part of the narrative in a very different way in 1837, when a townsman from nearby Shuia named Iumatov signed a contract with the Ivanovo estate administration to open a tavern (traktir) in the village. There’s quite a bit to say about it in other contexts, but for the moment, I want to talk about two of its clauses because of how they deal with the threat of fire. Points three and four of the contract state:

3. If due to my carelessness or that of one of my servants there is, God forbid, a fire, I Iumatov am obligated to repair any damage at my expense, or to pay the estate administration for the costs of damage as valued by the good peasants of the Ivanovo estate with the mediation of the estate administration if we can’t come to an agreement between us.
4. If a fire happens by act of God from a lightning strike, or if I Iumatov suffer damage from a fire that happens in neighboring houses, then no losses for that will be collected from me.

On some level this isn’t really surprising at all—if Iumatov was guilty of causing a fire, he had to pay; if he suffered due to circumstances out of his control, he was not liable. Somehow, though, reading through this I was particularly struck by the aside—God forbid (Bozhe sokhrani)—in the middle of point 3. The mere mention of fire needs to be countered with a hope that no such ill befall the village. Cases like that of the peasant Klimov make that understandable on an individual level—save us from fire, save us from burning, save us from death.

According to contemporaries, though, the biggest trauma to hit the village happened in 1839. On May 13 a massive fire destroyed 416 buildings and 61 factories. The village had grown hugely in the first decades of the nineteenth century in both population (at least part-time) and industry, and the fact that there were 61 factories to burn highlights that fact. As a result, the damages were staggering—according to one account property worth 1,100,000 silver rubles was lost. According to another, its value was more than two million rubles.

Those hardest hit were the industrialists of Ivanovo, mostly themselves freed serfs who had become merchants and factory owners, most of them living in or near the village under agreements with the estate administration and Count Sheremetev. They viewed the fire as a disaster, but also used it as an opportunity to try to alter the basis of their agreements with Sheremetev: Sheremetev owned all the land, they owned the buildings on it. To them, this was a chance to get something new. But that will be next time, in what is turning out to be a miniseries within the miniseries.