In my first post about Ivan Baburin, I concentrated on the ways that he likely felt at odds with the estate administration or with Sheremetev—he was a prosperous man by nearly any measure, having purchased his freedom and entered the Moscow merchant society, apparently quickly moving into the first guild. His consistent success allowed him access to the status of honored citizen, as well. At the same time, however, he paid dearly to continue to manufacture in Ivanovo. And more troubling, he paid more dearly than his fellow former serfs by a considerable amount. Given his success, some extra payment might have seemed acceptable, but it’s hard to imagine that he did not feel some resentment at the degree to which he was burdened by payments to his former owner in comparison to others. 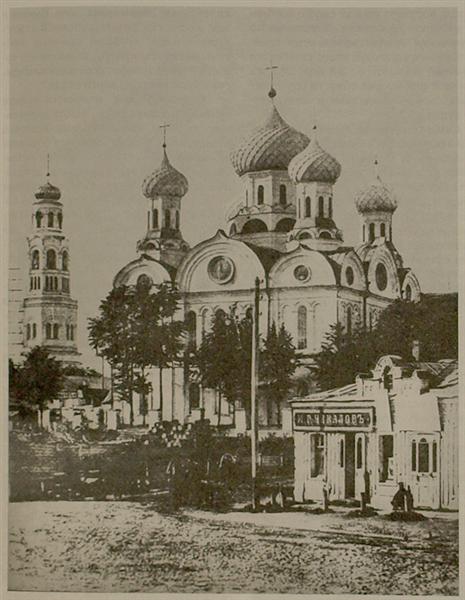 The Church of Christ’s Birth in Ivanovo; Ivan Baburin contributed to its construction. (I think.) Source: Фотосайт Владимира Побединского.

When looked at from this point of view, Ivan Baburin seems to have been both well respected and well liked in Ivanovo after his manumission. Although his decision to join the Moscow merchant society as opposed to one of the more local merchant societies of Shuia or Vladimir might have marked him as someone with hopes of social advancement and therefore separation from his former society, in the middle of the 1830s he was instead described as a model factory owner in the village.

The Sheremetev main chancellery was concerned with how things were going in Ivanovo after so many of its wealthy members had been freed, and for good reason. In 1835, it addressed an earlier report from the Ivanovo estate administration of how residents of the estate felt about their former fellow serfs. Overall, the serfs believed that the new merchants were getting too much benefit for not enough payment—this is likely why they had produced lists like the one that ended with a lament that the Ivanovo serfs were falling “into despair, and even into thievery and drunkenness” due to new demands for money.

Ivan Baburin, however, was an exception. His financial accord with Sheremetev made that quite literally true—his settlement was exceptionally high in comparison with his other fellow former serfs—but the report suggested there was something deeper going on:

“the merchantry get not inconsiderable benefit from their residence in Ivanovo, and all at the expense of the estate… to ease this, make a proposition to the merchantry, that on the example of the manumitted Ivan Baburin, each of them in proportion to their finances, each according to their good will and conscience, give a little something in contribution for the village expenses to the peasant society.”

By this account, Baburin was going over and above what he had to do by his agreement with Sheremetev, and helping out the village in other ways. He was, it is hinted, charitable, a philanthropist when it came to helping out the larger serf population.

Other sources suggest some of the specific ways in which he did this. Most notably, in 1836, he paid for the construction of a bridge across the river Uvod—a huge benefit to the village population and to his fellow merchants—at a cost of 15,000 rubles. According to a descendant of one of his fellow former serfs/merchants, the serfs believed that by building the bridge he had protected his soul from “the torments of hell, if such were his judgement.”

(It should probably be noted that in this story, too, there are interleaved sources of resentment and conciliation. In September 1835, he wrote to the estate administration asking for permission to build a new bridge, replacing an old rickety one. The village skhod met to discuss the proposal, and agreed—but wanted it put in a different place. The estate administration wrote to the main Sheremetev chancellery, and they wrote back giving Count Sheremetev’s approval and his personal thanks to Baburin “for his voluntary contributions for the benefit of the estate.” So here, the serfs were the source of some degree of bother, and Sheremetev of friendly thanks.)

Baburin also engaged in other philanthropic acts. He was the moving force behind the construction of a new church in the 1840s, and also contributed to the construction of a poor house affiliated with another church in the village. In 1846 he began to hold Sunday school classes for children working at his factory, a fact that was lauded as a particularly good thing by the provincial mechanic I. Nesytov. The students had classes in religion, in Russian grammar, and in basic accounting.

Later, too, Baburin took on an important local position when he became the first mayor (town head) of the new town of Voznesenskii posad. Election to such a position of authority might not always be a sign of respect, but in this case it’s hard to imagine that it wasn’t, for the local merchants of the Ivanovo region had fought to make their suburb into a town in law as well and in practice. (Merchants had started to purchase land from nearby landowners and build up what was a town in all but name; in 1853, after several years of petitions, the settlement was formally named a posad, and granted many of the administrative structures of towns.)

In this alternative vision of Baburin’s experience of life as a merchant in Ivanovo, he is well settled into the larger life of the village and region. He is successful, he is charitable, he is a contributor to the society of his fellow merchants and of the local serfs. This, then, is also the context of his eventual protest—or perhaps in this context, his statement of principle?—against his agreement with Sheremetev.

(One more note: for photographs of pre-Revolutionary Ivanovo buildings, check out this beautiful photo album of the city by Vladimir Pobedinskii.)