Oral History and the Web – Introducing my project’s site

When teaching Soviet history many of us are keen to give our students access to primary material about the experience of ordinary people in the USSR. For all its epistemological particularities, The Harvard Project has often worked well with my students: because of the 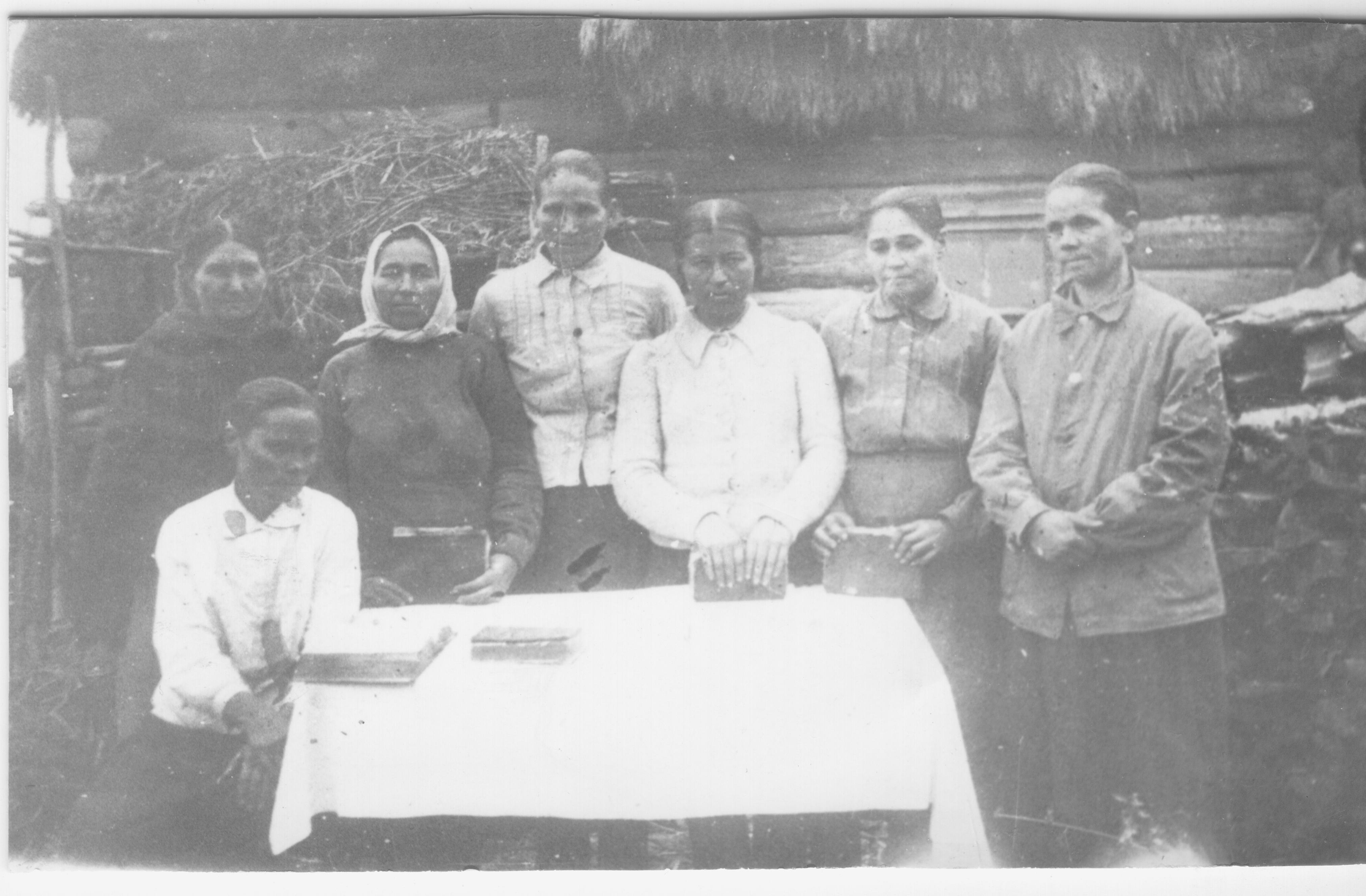 A group of women believers from the village of Goreloe, Tambov region, 1947. (Photograph courtesy of V. A. Popov)

of material on offer (and in translation) they can get to identify topics and themes, and act as independent researchers. In recent years various books and websites have proven useful for both myself and students including: Russia’s Sputnik Generation, Gulag Voices, European Memories of the Gulag site, and Orlando Figes’ website. (I’d be grateful for any tips on other collections or sites that allow non-Russian speakers access to oral history materials.)

This post and the follow-up ones I plan to write over the next couple of months introduce my own small, and rather niche, contribution to the growing body of oral-history source material now on offer. For a while now I have been working on the history of a specific religious minority in the USSR: Baptists and Pentecostals. About forty oral history interviews were conducted and extracts from ten of these are presented on the project website, arranged under thematic headings with the transcripts posted in the original and in translation. I hope they will be of interest to students / researchers working on the history of religion in the USSR, but as I will show in this first blog, they might also offer insight into broader aspects of Soviet social history. In this first blog, I use one elderly woman’s life-story to think about some issues relating to gender, family, and survival in the 1930s and 1940s.

I am returning here to the very first interview I ever carried out which was with an elderly woman named Z. who lived on the outskirts of Moscow. I wrote about Z. on this site several years ago. In that post, I was interested in how she presented her life story, in particular her refusal to recognize the end of the Soviet Union in 1991 as being any kind of significant turning point.

On the project website, I present her life-story in more detail along with two extracts from her interview. The first extract offers listeners a glimpse into what it was like growing up in Stalinist Russia: indeed with its upheaval, violence and poverty we might characterize Z.’s experience as a classic 1930s childhood. (The place of religious worship in the life was also not untypical, I’d argue: her mother was, she says, Orthodox if anything, and during Z.’s childhood they would sometimes go to Church for the major holidays, such as Easter.) The second shows the precariousness of life in the post-war period, particularly for young women like Z., who reluctantly came to recognize the value of acquiring and retaining a healthy, sober, and hard-working husband, even if it meant sacrificing other aspirations.

Z. was born in 1925 in Drezna, Moscow region. In 1930 her parents moved to Voronezh but things did not work out well for them there. Her father regularly went on drinking binges, selling her mother’s belongings to fund them. Z. was unable to attend schools because she had nothing to wear, and her father couldn’t see the point in educating her anyway. Within two years, he had drunk his way through everything, Z.’s parents divorced, and her mother sold her overcoat to cover the train fare back home. They moved in with her aunt who lived in a village on the outskirts of Moscow and Z. started school. There is no further mention of her father in Z.’s life-story. For this segment of the interview, click here.

In the early classes of school Z. excelled academically but she found the final years harder. Her mother, who had herself only two years of schooling, found it hard to help with Z.’s homework and by the time Z. had finished the seventh class (in 1942) the small family needed an extra wage. Her dreams of training to be a doctor were shelved and she went to work in a nearby factory. Here she caught the attention of a foreman who soon proposed to her. He was a little older than Z. – nine years he said; but he was well-educated and he didn’t drink, and Z.’s mother and aunt thought he was too good a catch to let slip. Persuaded, Z. married when she was 19 and her first child soon followed. Only then did she discover that her husband had ‘deceived’ her. He was in fact 19, and not 9, years her elder. Incensed, Z. wanted divorce but again her mother and aunt counselled prudence. How would she look after the child on her own in those years? ‘There aren’t many men left now after the war,’ they reminded her. Her mother who had struggled so much to raise Z. alone didn’t want the same experience for her daughter. Z. stayed in the marriage and a further two children followed. She continued to work on the factory floor, moving to a plant producing refrigerators in the mid-fifties. It was heavy labour, but the satisfaction she gained from this work comes through clearly in the interview.

At the end of the war, her aunt had encountered an evangelical community – Z. did not know the detail of how or where – and was converted. The aunt prayed for Z. and her mother, urging them to attend services with her at the Moscow Central Evangelical-Christian Baptist Church. Both agreed, although Z’s mother never repented. At the age of 23, Z. began visiting the church on Malyi Trekhsviatitel’skii lane and was baptised in 1948. At first Z. went to Church twice a week, but her husband made it increasingly difficult, and – pregnant with her second child – she began to attend services only rarely. Her colleagues at work were unaware of her faith. In the interview Z. was very self-critical and saw her silence as a sign of spiritual weakness. To hear about these post-war experiences, click here.

In the extracts presented on the website, the role that men play in both phases of her life is fascinating. In the first extract, Z. provides a vivid description of the claustrophobic home, huddling with her mother on top of the stove, her drunken father lashing out. In these long years of hardship, her mother – with limited education and poor eyesight – struggled on her own, with the help of Z.’s aunt. In the end, Z.’s escape route out of poverty was not via education, or party membership, but rather the age-old path of marriage to a better educated, older man who had secured a decent job. But this social security came at a price. From early on, Z. doubts the marriage. Her aunt and mother support her, but – surely drawing on their own experiences – urge her to hang on to this (sober) husband, even if she didn’t like or respect him very much. Z. concluded: ‘And so when my aunt took me to church I just sighed with relief, life seemed easier.’ (This relief, it should be noted, was only a temporary reprieve: the second part of the interview traces her ongoing struggle to pursue religious worship against the wishes of her atheist husband.)

In terms of my own research, I’m interested in how, why and when individuals came in to contact with baptistic communities and what this experience meant to them. But this interview also offers more general insight into the life of a woman from a poor background during the core decades of Soviet power (1930s and 1940s). Just as 1991 as a historical moment seemed meaningless to Z. (discussed in my earlier blog), the story of her childhood suggests that the ‘Soviet regime’ – for all its dominating ideology, new social structures, and repressive agencies – impinged on her life-experience only minimally. As I’ve suggested already, this girl from a poor background did not experience the social mobility (via education and party membership) that historical accounts of the 1930s often foreground. Moreover, her experience of violence and domination came not from the state, but from the men in her life (the violent father, the jealous husband). In turn, support comes not from wider social collectives but from the female members of her family and, intermittently and problematically, from the religious community to which she was so attracted but which she only felt able to fully join in the later years of her life.

This entry was posted in Nostalgia and Memory, oral history, Religion. Bookmark the permalink.