When Steve Barnes invited me to join this project, I hadn’t given much thought to blogging as a scholarly enterprise.  I have read academic blogs from time to time and I usually enjoy them. Sometimes helpful, sometimes self-indulgent, often stimulating, frequently ranting, I’ve put them on the list of things I’ll browse for intellectual pleasure in odd moments in the day, say the ten minutes I have between lunch and my one-fifteen class. But I didn’t plan to write them myself. Steve convinced me, however, that the blog as a genre held real possibilities for scholars. I won’t go into all of those possibilities in this first post, but I will point out a couple of obvious facts about the current limitations of scholarly publication: we only review new books, we review articles anonymously or in the safety of our classroom, and we comment very infrequently upon the strengths of particular works for teaching.  And, of course, the publishing process takes a long time.  At one time, listserves promised to break down some of these barriers, but few of them really do.  So this group blog, from my perspective at least, is a chance to experiment with short-form publishing in which the peer review comes after publication (in the form of responses to the posts, which are always welcome) rather than before.  It’s an exciting opportunity.

My first post is a short translation I’d like to share and briefly comment upon.  Aleksandr Subbotin was a cavalryman from the village of Kolkovo in Tver’ province who served in Rennenkampf’s First Army at the start of World War I.  Bright and literate enough to keep a diary, but occasionally clueless enough to be confused about the actual army he was in (he wrote that he was serving in the Fourth Army), he left behind a diary of the war and several photographs.  These remnants were preserved by local historians and ended up in a special room of the House of Trades in the town of Goritsy. They were read there by Vladimir Burdin, who thought the story of the local boy off at the Great War merited publication.  His edited volume of the diary was published in 2008 in the small burg of Kimry (pop. 50,000). As far as I can tell, only one library in the United States owns the book, and only the magic of WorldCat and interlibrary loan brought it to me. 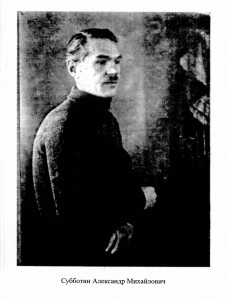 END_OF_DOCUMENT_TOKEN_TO_BE_REPLACED

From time to time, I want to share some of the remarkable photographs, paintings, drawings, artifacts and documents available to the public in the Gulag: Many Days, Many Lives archive.  Here we see one of my favorite images–one I write about briefly in my forthcoming book, Death and Redemption: The Gulag and the Shaping of Soviet Society, and that I use as a key illustration in virtually every public lecture I give on the subject.

The main sign reads “Graves of the Lazy” (Могила Филонов – with the latter term a Gulag acronym for the “False Invalids of the Camps of Special Designation”).  The burial markers in this “propaganda graveyard” read names and percentages like “Gaziev – 30%” or “Mavlanov – 22%.” The meaning would have been quite clear to prisoners. As a fellow prisoner and brigade leader told Janusz Bardach, “You work, you eat. You stop working, you die. I take care of my people if they produce, but loafers don’t stand a chance.”[1. Janusz Bardach and Kathleen Gleeson, Man Is Wolf to Man: Surviving the Gulag (Berkeley: University of California Press, 1998), p. 204]