This semester I’m teaching a new course entitled “Sex in Modern Europe,” which I developed on the basis of some research I did a few years ago when co-authoring a book with Annette Timm. The course has seven two-week units: 1) Sex, History, and Theory, 2) Sex, Enlightenment, and Revolution, 3) Sex, Cities, and the Industrial Revolution, 4) Sex and Empire, 5) Sex and Total War, 6) The Long Sexual Revolution, and 7) Sex in Contemporary Europe.

END_OF_DOCUMENT_TOKEN_TO_BE_REPLACED

When I began my study of Yuri Gagarin many years ago, my biggest challenge, as any historian who has worked in Russian archives can appreciate, was getting access to sources. Gagarin was and remains not just a Soviet icon — but a Russian icon, manipulated and exploited for various patriotic purposes by Soviet and post-Soviet governments. That is especially the case with the fiftieth anniversary of Gagarin’s flight less than two weeks away. Vladimir Putin has personally chaired the organizing committee for celebrations. Relatives, cosmonauts, government officials, museum workers, and curators have arranged the proverbial wagons around Gagarin to protect him from any attempt to tarnish his image — either those based on historical evidence or those concocted from urban myth and hearsay (the main source of information about Gagarin for many journalists, as noted in my previous blog).

END_OF_DOCUMENT_TOKEN_TO_BE_REPLACED

A recent controversy surrounding the biography of Yuri Gagarin, and involving NPR, highlights the gaping divide separating academic history writing and the public presentation of history. Last week Robert Krulwich, who writes on science for NPR, posted a blog based on a 1998 book entitled Starman (http://www.npr.org/blogs/krulwich/2011/03/21/134597833/cosmonaut-crashed-into-earth-crying-in-rage). The blog uncritically presented the book’s dubious account of the tragic death of the cosmonaut Vladimir Komarov on April 24, 1967. Gagarin was the back up for that flight. Historians at NASA immediately alerted fellow blogger Asif Siddiqi and me to the blog. Asif, who knows the history of Soviet space better than anyone, posted his critique of the NPR article, followed by many others (see the comments following the blog above). To his credit, the journalist involved has decided to investigate further(http://www.npr.org/blogs/krulwich/2011/03/22/134735091/questions-questions-questions-more-on-a-cosmonauts-mysterious-death?sc=emaf).

END_OF_DOCUMENT_TOKEN_TO_BE_REPLACED 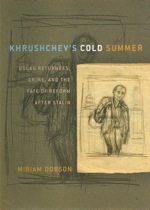 This is just a short blog to point any interested readers to the interview I recorded with Sean Guillory for his recently launched New Books in Russian Studies.  I was pleased that my Khrushchev’s Cold Summer could still count as a new book, even though it was published in 2009.  After a break of more than two years since I dispatched the final proofs back to the publisher, it was strange, but enjoyable, to find myself talking in depth about issues which had been the focus of so much attention for so many years.

For my first post for the blog, I decided to draw from a forthcoming project of mine on the history of Soviet science and technology as it intersected through the apparatus of repression. What follows is a short summation of several chapters on the so-called sharaskha system. I was led to this topic partly by an interest in censorship during the late Soviet period. As many older Russians undoubtedly remember, by the early 1970s, the culture of underground or samizdat literature in the Soviet Union had evolved into a highly risky but established system for disseminating information among the dissident community. Banned literature—poems, fiction, accounts of current events—vied for space in poor quality publications circulated through a clandestine network. One such type-written manuscript of less than two hundred pages struck a chord among many samizdat readers despite its unusual subject matter—it described the work of an aircraft design organization from three decades before. Known by the title, Tupolevskaia sharaga, the manuscript attracted a large leadership and became a classic in the literature of dissent.

In vivid language, its anonymous author recalled his experiences as an engineer in a special prison workshop headed by the giant of Soviet aviation Andrei Tupolev.

The prison camp had been organized sometime in the late 1930s and housed hundreds of leading Soviet aviation designers who, cut off from the outside world, labored through physical and psychological hardships to produce new airplanes for the cause of Soviet aviation. By coincidence, Tupolev died soon after this manuscript began circulating. In Moscow, he was given a state funeral and his contributions eulogized by Leonid Brezhnev, but unsurprisingly there was no mention of his arrest, incarceration, and work in a labor camp during the Stalin era. The anonymously authored memoir, smuggled out to the West and published in English, remained a peculiar anomaly in the historical record, suggesting tantalizing lacunae in Tupolev’s official biography. [1. A. Sharagin, Tupolevskaia sharaga (Frankfurt: Possev-Verlag, 1971). A French translation was also published in 1973.]