Hi, all–I’m the newest blogger here. In principle, I’m supposed to add in more Imperial-era coverage.  And, well, in practice, that is what I’m doing. I thought I’d start with something I’ve recently come across in passing that keeps making me think, but about which I have no particular conclusions.  Perfect for a blog?

Specifically, I’ve been spending a lot of time with the Polnoe sobranie zakonov, a process made much more pleasant because of the utterly fantastic fact that the Russian National Library has scanned the whole thing and put it up online.  Even when I’m looking for something specific, though, I find myself randomly reading other laws in large part because they tell me things I didn’t know.  I learn that Peter the Great made a law to restrict the sale of wax candles for use in churches to the churches themselves, and forbade the practice of random other people selling such candles on the street outside churches.[1. PSZ vol. 6, no. 3746 (February 28, 1721)] Or I learn that Anna was so upset to hear that people were being trampled by people galloping through the streets of St. Petersburg (on horses, of course) that she banned galloping in the city–and furthermore announced that anyone caught galloping would be punished by being beaten with the cat-o-nine-tails “mercilessly.”[2. PSZ vol. 10, no. 7170 (February 6, 1737)] 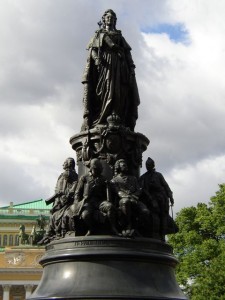 And then there’s Catherine the Great. Now, obviously, she was a woman who liked laws, what with her famous “legislomania” and all that. But she also had a thing for commemorating major events (military victories, putting up the Bronze Horseman [yes, really]) by releasing Manifestos to All Her People, granting them all sorts of things.

One in particular shows up in a number of discussions of her reign.  On March 17, 1775, in honor of making peace with the Ottoman Empire, she released a Manifesto giving “mercies to various sosloviia” in recognition of God’s mercy in granting her and her state victory, peace, and the respect of other nations.[3. PSZ vol. 20, no. 14275 (March 17, 1775)] She wondered (she wrote) how best to honor that divine intervention, and decided that according to the Lord’s words, He preferred mercy to sacrifice, and so mercy she would give.

Forty seven “mercies” then follow, and it’s their variety that has made them the subject of quite a bit of writing here and there.  A whole series of them involve repealing or reducing specific taxes.  And this is the first place that Catherine clearly distinguishes between merchants and meshchane, and as a result the Manifesto is often seen as a major precursor to her Charter to the Towns a decade later.[4. John T. Alexander, Catherine the Great: Life and Legend (New York, 1989), 191;  Isabel de Madariaga, Russia in the Age of Catherine the Great (New Haven, 1981), 269, 281] These are important bits of legislation, almost hidden in the midst of this larger statement. The last of them are what I went to the law to examine.  But while doing that, I noticed this. 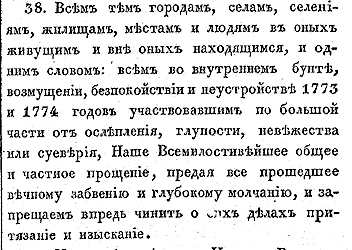 “To all those towns, hamlets, villages, places, and to the people who live in them and who reside outside them, and in a word: to all those who took part in the bunt, the disturbance, the agitation, the disorder in 1773 and 1774, for the most part due to blindness, to stupidity, to ignorance or to superstition, [we give] Our Most Merciful general and particular pardon, consigning all that has happened to eternal oblivion and deep silence, and we forbid future claims or investigations into these matters.”

Perhaps it’s because of some of the news running around recently that touch on history and memory, and even more on willful forgetting. (And apologies if I’ve missed follow up on these issues that make them look different.)  Whatever the reason, I find this statement to be very powerful–even very disturbing. 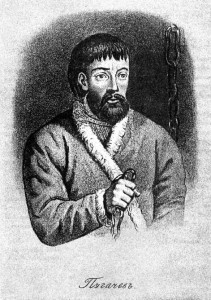 It’s just such a blatant example of historical memory–or, really, of historical forgetting–being used for essentially political purposes.  Even the name Pugachev is wiped out of this version of history: there was just “disturbance, agitation, disorder.” There weren’t real, conscious participants, but only the stupid, the blind, the ignorant.  It simply wasn’t.

This also makes me think of Pushkin, and his efforts to research not just the Pugachev rebellion, but Pugachev the person.  And, more, of his conclusions: the novel The Captain’s Daughter, and his history, which he presented to Nicholas I with a conclusion not at all like Catherine’s forgetting:  “All the common people were on the side of Pugachev.  The clergy sympathized with him–not only the priests and monks, but even the archimandrites and archbishops… If we analyze the measures taken by Pugachev and his companions, we must admit that the rebels chose the most reliable and effective means of achieving their goals.  The government’s actions, by contrast, were weak, slow, and ill-advised.” [5. Paul Debreczeny, The Other Pushkin: A Study of Alexander Pushkin’s Prose Fiction (Stanford, 1983), 247] Even here, of course, there is a kind of forgetting.  Nicholas didn’t want the history to be titled a History of Pugachev, and insisted that it be a History of the Pugachev Uprising. [6. Weirdly, google books seems to have the second volume, but not the first, although the second, which is all sources, is maybe the more interesting one for the historian.] The participants are removed from history, and only the abstract events remain.

9 replies on “Catherine on Memory and Forgetting”

Welcome aboard! And what a fascinating post. I am intrigued by distortion zones and historical amnesia — especially where politics and public historical memory are concerned. I’m definitely going to integrate these examples you cite into my Russian history survey.

This is just what I want in a history blog: a single moment, nicely contextualized, based on careful reading of a primary document, offering resonant new (at least to me), insight into a familiar event.
Very nice–thanks!

Catherine had the devil of a time trying to bridle a nobility that had its own ideas about ruling Russia. I think if she had admitted the grounds behind the Pugachev revolt, she would have undermined her own authority (in the eyes of the nobles) at a time when she absolutely could not afford it. But notice what she does instead. Instead of persecuting her own people into the ground, which Peter I or Ivan IV would probably have done, she claims the first excuse she can find to call off any prosecutions or punishments.

I can’t say that she didn’t manipulate that situation–or many situations–to the detriment of the historical record, but it seems to be a repeated theme of her reign that she showed mercy on sometimes slim pretexts when it was hardly to be expected of her.

Thanks for this post, by the way! I’m looking forward to more.

Well, woohoo–compliments and reasoned discussion, all on one post. I’ve hit the internet lottery, I think! Thanks to Andy and Joan for the nice comments on my inaugural post. And to Lucy–of course you’re right. Forgetting is certainly more merciful than going off and killing everyone, and there are plenty of reasons to forget rather than to deal with discontent. And I realize that the concept of consciously airing past trauma–of truth and reconciliation, say–is quite a modern thing (or at least I think it is?). But it doesn’t stop me from being struck by the phrasing!

I agree that the phrasing is striking. And I like the point you make about truth and reconciliation being a modern concept. I’d be interested to see when it first cropped up, because it’s something human beings tend to shy away from, as a whole. Governments/powers/etc., certainly do, on the grounds of avoiding embarrassment.

Another thing that occurred to me, too, after I replied, was the use of semantics. If I understand the climate of Catherine’s time correctly, one couldn’t pardon treason. It simply wasn’t done. One could, however, pardon a disturbance.

But you’re right that it does sound an eerie note. I think because the language itself, however kindly, is only a mask for the motives. Catherine may have been looking to show mercy, but others have used similar phrases to mask some of the world’s great horrors. Reading it is like looking through a smoky glass; what’s hidden behind can be light or disturbingly dark.

I tripped over this blog by happy accident. I studied Catherine in the academic context of a comparison of Russian serfdom and US slavery but also in the rather startling immediate post 1989 political situation with lecturers rather grumpily having to completely rewrite their lecture notes and the (honest) students asking “but where exactly is Abkhazia?”.

As a mature student I was very struck by the monumental task that C had to undertake to rebuild the Russian state. Is it true that at her first council meeting she asked for a map of Russia and there wasnt one – so they sent a clerk to the nearest bookshop to buy one? It is at least indicative.

There is plenty of evidence that C was an active participant in the enlightenment – her correspondnence with Voltaire, funding the completion of the Encyclopedia inexchange for Diderot’s archives ( are they still in Russia or did they never get there?) and of course poor old Diderot’s visit not to mention Jeremy Bentham. I came to the view that whatever she might have believed personnally she did not believe that too much liberty would lead to the greatest good of the greatest number. Seeing what happened to France was she entirely wrong?

To get to the point. Was she not right to sweep the immediate disasterous past under the rug? There is an interesting modern precedent in France. General de Gaulle did exactly the same after WW2 to heal the divisions in France. Interestingly there is reason to believe that Vladimir Putin models himself on de G. to some extent. Equally I have always thought his Russian role model (perhaps German would be more accurate) was Catherine not Peter but then that would not be very macho publicity wise.

Final question – is it really likely that “all” the peasants backed Pugachev? If so how was he defeated? It is quite likey that many of them went along with the rebels for their personal safety.

What a ramble – great blog.

Both volumes of A. S. Pushkin’s Istoriia Pugachevskogo bunta have been digitized by the NYPL and are now available online via the Hathi Trust Digital Library: http://catalog.hathitrust.org/Record/008614542

[…] starting in the 1830s, and now represented (as Alison Smith has already shown us on this blog) in an impressive and incredibly useful online edition, overseen by the Russian National […]