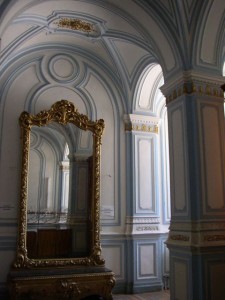 When you start reading through the Polnoe sobranie zakonov (Complete Collection of the Laws) on various subjects, you see ukase after ukase saying virtually the same thing (and often quoting the earlier laws). This is, it seems, necessary for making the autocratic project (if that’s not too grand a term for it) work, particularly before the PSZ and, even more, the Svod zakonov (Digest of the Laws) put the various laws out there into a coherent form. It’s even remarked on by rulers themselves in some of their ukases.  Richard Wortman, in his Development of a Russian Legal Consciousness, quotes Empress Elizabeth on this subject.  She tasked her Senate to pay more attention to the institutions of law in the Empire because her word was not getting out to most people (and blamed “widespread internal enemies” for corrupting her message).

I recently came across one of these repetitive laws. It (PSZ I, vol. 30, no. 23,381 (December 3, 1808)) draws on another ukase from several years earlier, and states that merchants, meshchane (petty townspeople), and others from the soul-tax-paying population (basically, peasants, freed serfs, and artisans) were not allowed to enter state service (i.e., the state bureaucracy, which could lead to place on the Table of Ranks, and eventually noble status) without permission from the Senate.

That’s already interesting, not just because of the law and the limits it placed on the ideal of mobility through the Table of Ranks, but also because the earlier ukase, apparently from July 30, 1798, isn’t in the PSZ.

Even more interesting, though, is why the law had to be restated.

Apparently, the Moscow State Archive of Old Business (Государственный в Москве старых дел Архив, in this version, though I’ve also seen it as Московский Государственный Архив Старых Дел) , which was part of the bureaucracy, had been ignoring the earlier ukase and allowing members of the soul-tax-paying population to enter its service.

Even more, they were letting  A LOT of people do this.  According to the text of the 1808 ukase, in the last four years the Archive had hired 273 people from this restricted group. That’s a huge number; according to an archival guide from later in the nineteenth century, the Archive by (somewhat later) law only had the following staff: a Counselor, two Assessors, a Secretary, an Archivist, and 11 chancellery servitors.

The 1808 ukase goes on to describe just what was going on with all these new hires:

“and this quantity of people, without any need to accept them, were then let go by that same Archive, to move on to other jobs or to retirement in a very short time, such that the greater part of them, having not served even two months, let alone a year, received the lowest chancellery rank.”

In other words, the archive was serving as a conduit, letting these men get their foot in the door to future upward mobility through state service.

The archive’s administration tried to say they had the right to do this according to a Manifesto from 1775 and the Charter to the Towns, but the Senate, in this 1808 decision, strongly disagreed. The Archival workers suspected of flouting the law faced criminal prosecution, and were furthermore to be interrogated in the hopes of finding other administrative offices that freely disregarded the law. Furthermore, any of those 273 illegally hired bureaucrats who had not yet received a rank on the Table of Ranks were to be sent back to their status of origin (those who had rank could stay, but had to be sure to pay the soul tax in their old status until the next revision of the tax rolls).

And here’s where we come to the problem.  I’ve looked around to see if I can find out much more about this archive.  There are bits and pieces, like the archival guide on google books, or a description of it at the Mosarkhiv site (since part of its contents ended up in the Central Historical Archive of Moscow–TsIAM), but nothing that I can at this point find about its personnel. So the question is, what was going on here?  Was this a case of radicals in the archives, people who wanted to give, say, freed household serfs a leg up in the world? Or was it just graft, and this archive became known as a place one could negotiate for a position? Or was it something totally different that I haven’t thought up?

Perhaps, to be continued, if I can find more information…

5 replies on “Radicals in the archives? (Or probably just graft.)”

It seems to me that in 1808 there could have been no “radical” in the archive. Enlightenment ideas were confined to a very few nobles at this point, weren’t they? And probably not even developed among the army officers, as the imperial army had not yet done its time in western Germany and Paris. Must be graft. Of course I don’t know squat about imperial history, so who am I kidding.

Sure, “radical” is a bit of hyperbole. But not that much later, there was a group of “archival youths” based in a different Moscow archive who formed the core of a lot of the literary/philosophical life of 1820s Moscow, including the Liubomudrtsy. Here’s something quick I can find on them: http://magister.msk.ru/library/philos/zenkv006.htm. Basically, the workers in the archive may well have been nobles with the right kind of education to be “enlightened.”

Hey, Radishchev ran the Customs House, right? (just like Hawthorne) If you could have “radicals” like Ivan Kuritsyn as a diak being a “radical” (Judaizer) at the turn of the sixteenth century, why not archivists three centuries’ later? I guess it all depends, as Dr. Smith indicates, on the definition of “radicalism.”

Ok, now THAT’s an interesting puzzle. Do let us know what turns up, will you? (Now that you’ve thoroughly piqued my curiousity…)

This looks like the beginning of the disillusionment with the ‘Table of Ranks’ being able to critically define the Russian citizen. Where did these 273 lowly bureaucrats come from? Also, the category of Peasant, while certainly low, did possess a surprising amount of flexibility. It seems you would need to map out the ‘networks’ of connections with these 273 anomalies- who did they ‘belong’ to, what did they do in Moscow, were they from Central Region or somewhere more remote, etc… Also, what so incensed the Senate? This hints towards larger issues than just wasteful bureaucratic hiring. Very interesting puzzle.