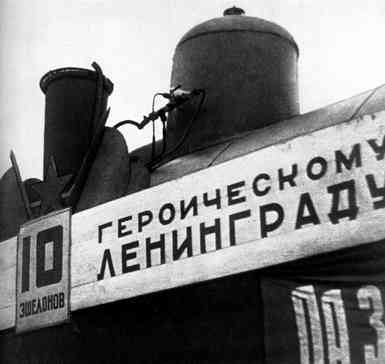 One of the first trains bound from Vorkuta to Leningrad with coal during World War II. The banner reads, "10 Eshelons to Heroic Leningrad!"

In writing the history of Vorkuta, I have grappled with the question of why the railroad that connected it to the Soviet “mainland” was built in the early 1940s, and in fact, why it was ever built at all.  By the time railroad construction was deemed a high priority by Lavrentii Beria in 1940, only a few months before Mochulsky’s arrival in Sevpechlag, prisoners had been already been mining coal in Vorkuta for nearly a decade.  Yet the expansion of Vorkutlag, as well as its economic relevance, had been strictly limited by its remoteness and inaccessibility.  The story that Mochulsky tells about his journey from Moscow to Abez, the administrative center of Sevpechlag (which was not far from Vorkuta) gives a good indication of just how inaccessible the whole region was prior to the construction of the new rail link.  During the winter of 1940-41, the Usa River froze earlier than usual, leaving barges full of prisoners, camp employees, and supplies stuck in the ice.  As Mochulsky recalls, the result was that it took him 45 days to reach Abez.[1. Fyodor Vasilevich Mochulsky, Gulag Boss, edited and translated by Deborah Kaple (New York: Oxford University Press), chap. 4 idem.]  This episode clearly indicates the degree to which a direct rail line was needed if Vorkuta was to become a major coal mining center.

But lack of accessibility only tells part of the story of why such a railroad was built.  The broader question is why Vorkuta’s coal, which was so difficult to extract and transport, was considered to be so essential that the Soviet state expended massive resources building a railroad across the open tundra to reach it.  One reason, which I learned early in my research, was that coal for Vorkuta was essential to the Soviet war effort, especially once the Donbas and the Mosbas were lost.  Coal from Vorkuta would be some of the only fuel that was able to reach Leningrad during its 900-day blockade.  Mochulsky’s memoir reveals another reason why Vorkuta’s coal was of strategic importance during World War II, which I had been unaware of: coal from Vorkuta was sent to Murmansk to fuel US and British ships that were delivering supplies under Lend-Lease.  Using coal from Vorkuta for their return trip meant that the ships could carry less fuel on their journey to the USSR, making it possible for them to carry more supplies.[2. Mochulsky, 77.]   This valuable insight goes a long way towards explaining why the railroad was treated with such strategic importance, and why it was completed rather than being abandoned like so many other grand railroad construction projects of the Gulag.

Once it was built, this railroad, known as the Northern Pechora Mainline, would play a pivotal role in the history of the region.  In the 1940s and 1950s it proved to be the lifeblood of a number of camp complexes in eastern Komi ASSR, including Vorkutlag, Intlag (a coal mining camp in Inta), and Ukhtizhemlag (a massive complex near the city of Ukhta that was dedicated to the extraction of gas, oil, and other resources such as radium).  This adds yet another dimension to the question that Deborah Kaple raises in the introduction and afterword of Gulag Boss: to what degree were “perpetrators” like Mochulsky responsible for facilitating the death and suffering of thousands of unfortunate prisoners?[3. Mochulsky, xv.]  While the author celebrates his contributions to the war effort, particularly in building a major railroad bridge near the town of Pechora, one must remember that it facilitated more than just the shipping of coal to the “mainland” to aid the war effort.  The trains also carried tens of thousands of prisoners to the camps of Komi ASSR, and many of these prisoners would never return.

Seen in this light, Gulag Boss also highlights one of the thorniest issues regarding the history and memory of the Gulag in Komi ASSR and other regions whose histories are closely tied to forced labor.  It demonstrates the degree to which the region’s contributions to the Soviet war effort were intimately connected to the expansion of the Gulag system.  Former Gulag communities such as Vorkuta, Inta, and Pechora commemorate their role in the Soviet war effort just as other cities do across the former Soviet Union.  But how can they do so without glorifying the use of forced labor, the wrongful imprisonment and suffering of tens of thousands of innocent victims?  Just as Mochulsky has done in this memoir, local leaders often promote the accomplishments of a “good man in a bad place.”[4. Mochulsky, 177.]  Particular local contributions to the war effort are highlighted, while the uncomfortable details about whose labor was used, and under what conditions they worked, is skipped.  To bring in the example of Vorkuta once again, city authorities there have glorified the wartime accomplishments of Mikhail Mal’tsev, the director of Vorkutlag from 1942-46, a man who even Solzhenitsyn acknowledged might have been the closest thing to a decent camp director.[5. Aleksandr Isaevich Solzhenitsyn, The Gulag Archipelago, 1918-1956 (New York: Harper & Row, 1974), 2:552.]  Mochulsky’s memoirs, as Kaple rightly points out, only further expose the difficulties that Russians face in coming to terms with their Soviet past.

Alan Barenberg is Assistant Professor of History at Texas Tech University.
View all posts by Alan Barenberg →
This entry was posted in Gulag Boss. Bookmark the permalink.