Let me back up, and explain.  I left Russia December 4, the day of the elections.  To tell you the truth, this wasn’t my favorite visit.  I was treated very well by all the archivists and scholars there; had a wonderful visit to a collector of sleighbells in Moscow; and saw a bunch of old friends.  But my general impression was of a place that was stuck in the mud, politically speaking; and this was in no small part because I spent a good many evenings watching the official pre-election debates that pitted the seven odd major parties against one another.

These debates were televised on one of the most official channels — Channel One, ‘Russia’–and were lavishly advertised and produced.  They took place every night like clockwork, hosted by a popular journalist, and had all the trappings of important political events.  And yet the reigning assumption of most everyone I talked to was that all this was just a circus–a play at democracy, staged not least to make the opposition look fractured and unprofessional, even as United Russia cruised to victory again.   And most of the time it was a circus, not least because the official opposition parties feature such characters as Vladimir Zhirinovsky, whose specialty is turning public events into infantile shouting matches.

And yet what a difference a week makes.  I look at the debates with somewhat different eyes now, namely the eyes of a pre-internet age low information voter, just now learning what all the fuss was about.  You see, one thing that eluded me while watching three-odd weeks of debates was just where a certain phrase came from, that everyone–the liberals, the communists, Zhirinovsky, the moderator–kept using, sometimes in earnest, sometimes ironically, sometimes in anger, but without fail always and in every telecast.  That phrase was, “the party of swindlers and thieves” as applied to United Russia.

Now, I knew that it must be some sort of new media cliche, and that it must have come from somewhere.  But I didn’t know from where, even as my ear got used to its rhythms and began to expect it to be used as shorthand for “the party of power” (partiia vlasti) — which I’m sure Putin’s party would prefer to be called.

Now I know.  As reported by Eileen Barry of the New York Times, I learned today that the “party of swindlers and thieves” epithet was coined by a Russian blogger named Aleksei Naval’ny.  And Barry goes on to credit this phrase with galvanizing Russia’s fractured opposition–as further organized by Twitter and other social media–into a real protest movement out on the streets.  United by this conception of the “party of power,” groups of radically different political views can imagine joining arms against it.  Barry concludes, “Navalny will be credited for mobilizing a generation of young Russians through social media, a leap much like the one that spawned Occupy Wall Street and youth uprisings throughout Europe this year.”

It all makes sense, except for one thing: I imagine millions of people first heard of the “party of swindler and thieves” not through a dissident blog or on social media but through Russia’s officially sponsored debates and government-dominated Channel One.  To be sure, before December 4, these same debates were widely panned as farces.  But as they played out, the references to some “party of swindlers and thieves” poured out by the dozen.  And I imagine many people who never heard of a blog are now finding common language with protesters because they share a vocabulary brought to them by TV.  Or am I still missing something?

Here’s that sample image, just a random example of the sorts of parodies the phrase now summons up on line: 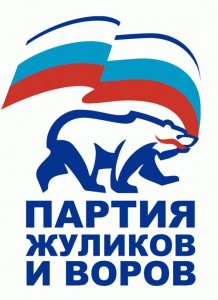 John Randolph is Associate Professor of History at the University of Illinois.

5 replies on “‘The Party of Swindlers and Thieves’”

I’m in Moscow now, John, and it’s been interesting to see what’s going on–though out on the streets, it mostly seems to be business as usual. I wouldn’t know about the protests if it weren’t for the radio/tv/news, unless, I suppose, I’d happened to go down towards the Kremlin yesterday.

But to partially answer your question, I just asked the friend I’m staying with–let’s call her E, a retired woman, not part of the molodezh–the origin of the phrase “Party of Swindlers and Thieves.” Her response: “There’s a blogger named Navalny, and he started it, and everyone started using it. It’s true, after all. People even just use the initials: PZhiV.”

So, I think social media/blogs has a wider range than you might expect. E is on facebook, and uses skype to keep in touch with friends in other cities. I think the internet has been a huge boon to people (probably mostly women) in the older generations, even if it hasn’t hit everyone. And there’s radio, too, which I gather has been far more open than tv, and a lot of (perhaps mainly older) people listen to radio, too, an awful lot.

Thanks Alison! I don’t want to leave the wrong impression–I don’t doubt the importance of the Internet or Navalny as innovator, etc. It’s just strange that given all we hear about state control of Russian television, the debates that were continually broadcast all November had PZhiV (as your friend called it) as an absolute touchstone. It seems like a case where the meme ate the frame: what were supposed to be debates that gave legitimacy to the elections (as conducted by the “party of power”) ended up reinforcing a theme that has become considerably less controllable. And this then does make me wonder how to understand the interplay between media forces (old and new, social and theatrical, blogosphere and government controlled) in creating this current civic outburst.

Oh, yes, that’s absolutely true, and interesting, that this formulation was… maybe it was the vanguard of protest on “official” tv? Followed by amazingly fair coverage of the Saturday protests even on Channel 1?

Honestly, how do you explain hipsters?

[…] picture reprinted with permission of ridus.ru.John Randolph at Russian History Blog notes that “the party of swindlers and thieves” – the anti United Russia slogan that has been inspiring protestors and was supposedly  […]