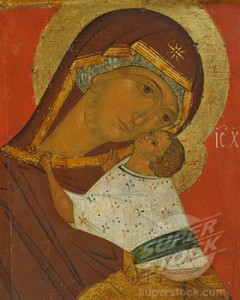 The policing of sexualities happened at all levels of the social order in the medieval world, and Levin’s work produces a rich account of the phenomenon. Levin has two main observations that guide her in detailing various aspects of the role of sexuality in society: that medieval Orthodox Slavs regarded sexuality as a public rather than a private concern, and that sexuality was a religious issue and less so a secular concern (conceding of course, that such distinctions were nebulous at best). Regulating sexuality generally fell under ecclesiastical jurisdiction but was supported by the cooperation of the parish community at large. The blogger Peasant Muse very nicely articulates this claim in the following way: “sexual behavioral norms and attitudes espoused by the Orthodox Church largely correlated to the norms and attitudes of the people themselves.”

There are many insights from Levin worthy of consideration, but I have been particularly interested in the construction of the public/private divide here. In the case of sexual transgressions, confessions to priests might have been done privately, but the administration of spiritual remedies (or penances) for such sins were decidedly not. In fact, the performance of penance was a public act, and the sexual transgressor could be easily identified when he or she was excluded from taking communion, compelled to fast, or barred from entering the church premises. Public shaming and humiliation was central to the control of (sexual) (mis)behavior; Levin recounts a striking case of a woman who was miraculously saved from having to perform public penance when the Virgin Mary interceded on her behalf and was able to silence her accuser. A person’s reputation, especially a woman’s reputation, was a reflection of her family’s honor and a measure of her standing, and even credit, within her community.

Levin’s broader argument is that by the late 17th century, the coterminous nature of canon law and community policing was disrupted by the rise of the “modern” state under the Tsar as well as by the concomitant reforms of the Orthodox Church (the Nikonian reforms). Here, she argues that, whereas the regulation of sexual behavior was an implicit contract between the church and the community, the ecclesiastical foundation of the policing was replaced by state (or really bureaucratic) actions and actors.

Levin’s claim then is one potential window for discussing the rise of the modern Russian state in a classroom setting, one that is not obvious but opens up insights into several directions. Methodologically, it links cultural codes with state governance, a connection that becomes more relevant as we head to 20th century Russia—consider, for example, Bol’shevik programs to delineate the culturally acceptable in Soviet civilization. But perhaps of greater importance, it allows a teacher to situate Russia, especially medieval Russia, into the broader European setting. In the nascent nation-states of Western Europe, the policing of sexuality remained largely a local issue, governed by either local secular or canon laws that were administered at the community level. Highlighting this comparison allows the student a small but insightful window in the differing nature of state imperatives in Russia and Western Europe. There is, of course, a large body of literature—much of it contested—on the presumed “different” trajectories of Russia and Western Europe, but most of it focuses on economic, agricultural, and industrial concerns in the modern era. The evolution of sexual policing in Russia, from being a public and religious concern to one of state concern (with the formation of the “modern” Russian state) problematizes the notion of the “modern” in Russia in a less obvious way than the usual invocations of Peter the Great and his state-building initiatives. Students are forced to confront the multivarious meanings of “modern” available to actors in Western Europe and Russia in the early modern period. [1. I list some potentially useful sources on the topic here: Marjorie Mandelstam Balzer, ed., Russian Traditional Culture: Religion, Gender and Customary Law (Armonk, NY: M. E. Sharpe, 1992); Valerie A. Kivelson and Robert H. Greene, eds., Orthodox Russia: Belief and Practice Under the Tsars (State College: Penn State Press, 2003); Carolyn Johnston Pouncy, The Domostroi: Rules for Russian Households in the Time of Ivan the Terrible (Ithaca: Cornell University Press, 1994); Nancy Shields Kollman, By Honor Bound: State and Society in Early Modern Russia (Ithaca: Cornell University Press, 1999); and Eve Levin, “Sexual Vocabulary in Medieval Russia” in Sexuality and the Body in Russian Culture, eds. Jane T. Costlow, Stephanie Sandler, and Judith Vowles (Stanford: Stanford University Press, 1993)]