The Stalin Cult – More (Clearly, I hope) on Thinking Visually

About Socialist Realism: the point I wanted to make is that, while Plamper gives an abundance of evidence showing the dynamic processes involved in producing Socialist Realist paintings, he vacillates when it comes to characterizing those processes. At times he acknowledges the roles of uncertainty and interpretation but at times he represents Socialist Realism as a coherent doctrine imposed from above. At least, that’s the way I read it. I wanted to better understand how painting compared with the other arts that have been studied more thoroughly.

About the paintings: first, whatever Plamper thinks of Matthew Cullerne Bown’s works (Socialist Realist Painting [1998] and his much shorter survey, Art Under Stalin [1991]), they include analysis of portraits of Stalin that not only use the “tools” of art history analysis, but make many of the same points Plamper makes about the portraits. And in Russia, examinations of these paintings also began among art historians in the 1990s- albeit sparingly. Or facetiously, if one includes Komar and Melamid. 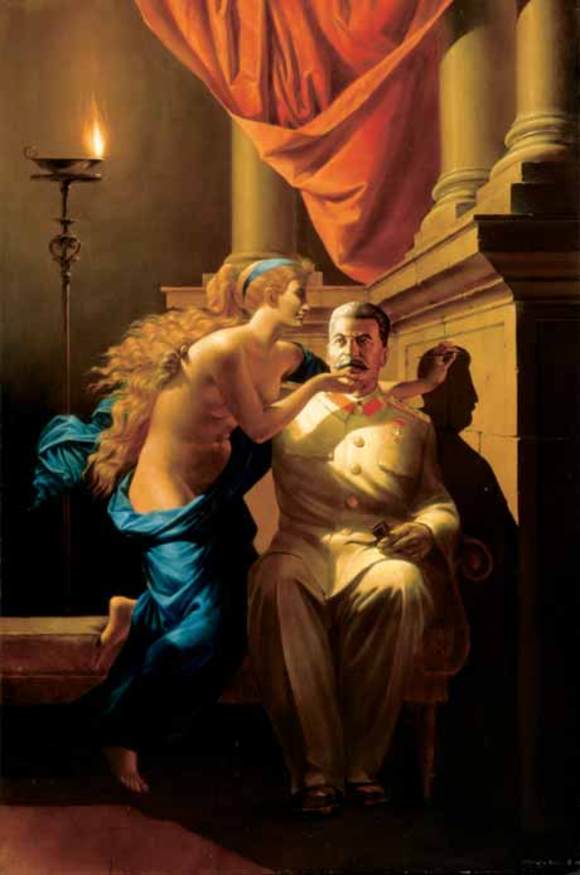 The Origins of Socialist Realism

Second, I focused on the problems with Plamper’s argument about geometric compositional elements because I thought they were typical of the ways he tries to link the concepts he discovers underlying the Stalin cult and the visual images that were supposed to represent and convey those concepts. I didn’t so much take Plamper’s circles too literally, as I apparently took him too seriously. “The circle was the seminal Stalinist shape used to structure space” (98); it “serves as an organizing theme in many other paintings” (105) And (speaking specifically of visual strategies), “concentric circles became the dominating pattern of spatial arrangement” (97).  It seems to me, that if we are using the tools of visual studies, we need to see the center of a circle and the center of a triangle and a various groupings of figures on a flat plane as different things. If circular ideas (rather than structures) were so important, why do they not show up in composition? What are we missing by imposing a reading that doesn’t hold up—what else is going on in these pictures? It’s no surprise that Stalin is at the center, so let’s be precise about what is going on around him. 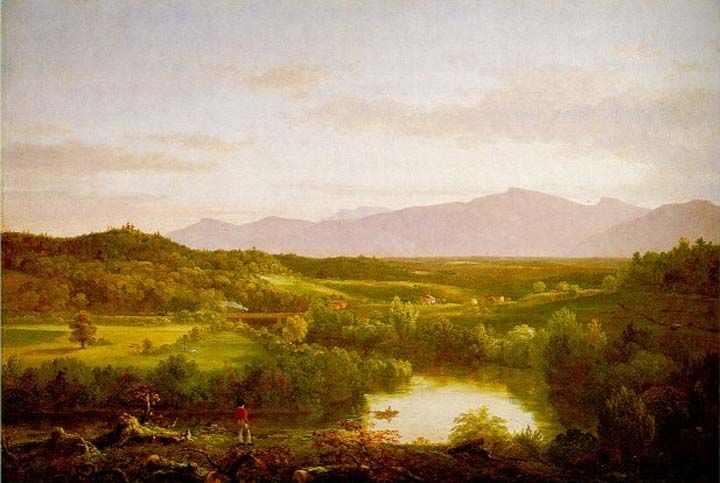 Thomas Cole, River in the Catskills

But ok, let’s talk about a different element in these portraits of Stalin: Plamper compares sightlines and the gaze in Morning of the Motherland with that of nineteenth-century, Romantic, landscape painting in the US, pointing out differences in composition and placement of the figure in a Thomas Cole painting. In the Cole, he argues, the landscape embodies the utopian future, whereas in Morning of the Motherland, Stalin alone “embodies the bright future” (110). We see Stalin from the front, gazing off toward a future only he can see, unlike in the American painting where we adopt the viewing position of the figure and look along with him at the fecund fields and inspiring mountains. Plamper dismisses the interpretation that the Soviet post-war landscape, with its vibrant, young trees, its freshly plowed fields, and its rolling tractors represents future progress, claiming instead that all that fertility is historically behind Stalin, who “has consummated a monopolization of progress” with his gaze (111). Stalin excludes us in his vision as decisively as the tiny figure in the painting from a “liberal-democratic” culture invites us to gaze with him, –a democratic gesture.

Here I think Plamper’s concentration on the portraiture of the Stalin cult skews his reading. He argues that portraits came to dominate painting and “all other genres (landscape, still life) were devalued” (91). Whether or not this is true, the absence in this statement and the book as a whole of what Soviets called “thematic” painting (and elsewhere, “genre painting”) is striking. “Thematic” paintings –- that is group scenes from everyday life or extraordinary heroic exploits, — were certainly plentiful during this period, and they figure in the Stalin cult, even if Stalin is absent (as Plamper does acknowledge). In some of these scenes, as well as in some portraits of ordinary people, figures are shown performing the utopian gaze. 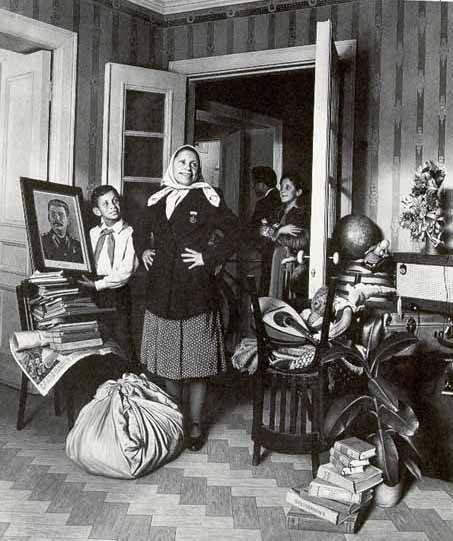 (It also appears in movies and on posters.) 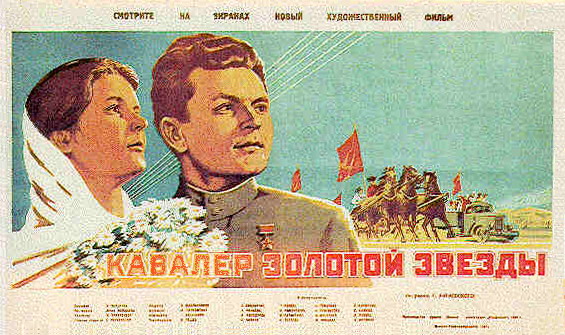 We even have some Socialist Realist “thematic” paintings that invite the viewer’s gaze into the picture frame by depicting figures from the back. 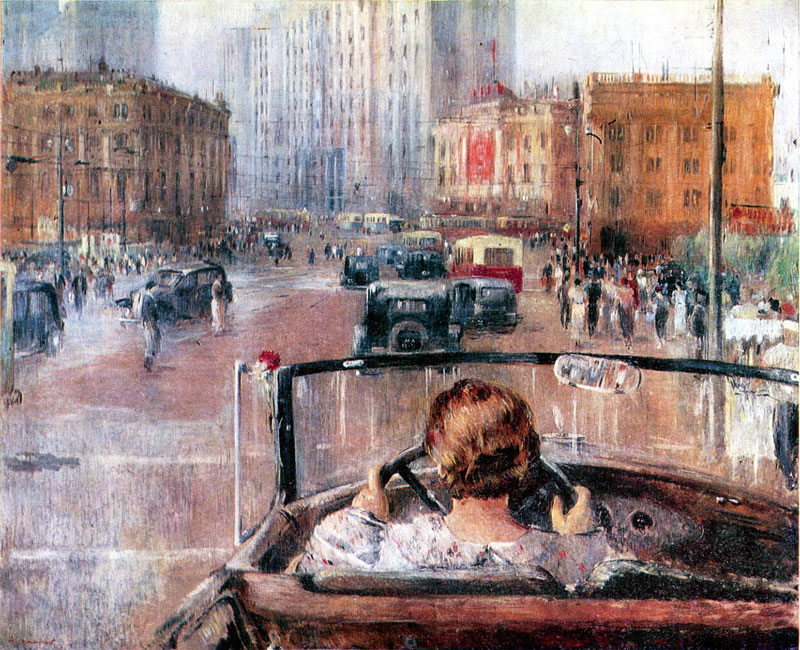 Stalin’s gaze is certainly impressive in Morning, as is his domineering bulk set against the distant, wide land, but it’s only a monopoly inside this picture and it doesn’t exist independently of other, similar representations.

All these images functioned intertextually and that challenges Plamper’s reading. It makes the comparison with Romantic landscapes seem arbitrary and leaves us without a visual context for reading this painting.

So far I’ve been talking about interpretations of individual paintings, but we don’t get much sense of how all these images functioned together to create an environment in which images of Stalin took a variety of forms and were accompanied by images (and texts) presenting Stalinist cult ideology. To take just one other example, it’s impressive that Plamper looked at every page of Pravda from 1929 to 1953, but I was disappointed that, while he makes a gesture towards the “transmediality” of Socialist Realism (256), he discusses the Pravda photographs without mentioning the texts in which they were embedded. Who looks at a newspaper without reading a word? It was strange to read about the pictures of Stalin with no discussion of the ways the texts and images commented on one another. So I was left feeling that I hadn’t learned enough about Pravda’s contribution to the cult.

Here I think the problem with this approach to Pravda is related to an assumption stated in the introduction, namely that the Stalin cult was produced for and consumed by a population that was illiterate: “whose mental universe was shaped primarily by images as opposed to words” (xv). Now I find this odd: why are visual images the main alternative to reading? There are other senses and feelings, not to mention speaking, there is experience and memory, and oral upbringing and tradition, and so on, all of which shaped the lives of people who couldn’t read. Besides, in 1937, 75% of the population was literate (up from 56.6% in 1926). Were these photographs (and paintings) really designed with illiteracy in mind? Can we understand them without reading the texts that surrounded them?

I realize that it is a convention of visual analysis to contrast pictures and words as Plamper does in the introduction, but it is too narrow a frame. As he ultimately shows, even those who were organizing the production of the visual cult weren’t assuming that the visual had unique power over the other senses and experiences, but rather inserted itself into those experiences. If Plamper had skipped a few months of Pravda each year and devoted more attention to the ways images of Stalin were deployed intertextually in the newspaper, we’d have a much better understanding of the function newspaper photos performed in the evolution of the cult.

It’s important to know that Stalin’s photo didn’t appear in Pravda every day, especially during times of crisis, but it did appear in offices, on streets, in newsreels, in other newspapers and magazines, as well as at art exhibitions. In addition to more accurate readings of the paintings themselves, Plamper could have provided a better sense of the role these paintings and photographs played in creating the Stalin cult as an everyday experience. I believe he could have even mined more from the comments books that he reads so well but so tentatively if he had been thinking about the connections among paintings, and between journalistic photographs and text all along.

2 Responses to The Stalin Cult – More (Clearly, I hope) on Thinking Visually