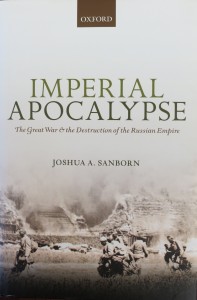 Welcome to the second blog conversation of summer 2015. Our next conversation is Russian History Blog contributor Josh Sanborn’s great Imperial Apocalypse: The Great War and the Destruction of the Russian Empire (Oxford University Press, 2014). Josh has brought a particular focus on Russia’s imperial dominion to this study of the effects of the First World War in the region; he views the Russian Empire’s experience of the war as part of a larger twentieth-century history of war and decolonization.

Because of the wide-ranging nature of Josh’s argument, we’ve asked specialists not just in Russia’s experience of the First World War, but also in its colonial holdings and oinrelated non-Russian experiences, to discuss the book. Participating in the discussion will be:

David McDonald, the Mortenson-Petrovich Professor of history at the University of Wisconsin-Madison. David has written widely on topics related to Imperial Russian foreign policy and military history, and has most recently been one of the project managers/general editors of the Russia’s Great War and Revolution project.

John Paul Newman, lecturer in history at Maynooth University. John Paul is a specialist the history of the Balkans, focusing on the role of veterans of the First World War in the new states of the region. His book Yugoslavia in the Shadow of War: Veterans and the Limits of State Building, 1903-1945 (Cambridge University Press, 2015) is just now available.

Willard Sunderland, associate professor at the University of Cincinnati. Willard’s work has focused on stories of Russia’s colonial expansion, most recently with his remarkable The Baron’s Cloak: A History of the Russian Empire in War and Revolution (Cornell University Press, 2014).

And, of course, the author, Josh Sanborn, professor and chair of the Department of History at Lafayette College. He has written or co-written two previous books: Gender, Sex, and the Shaping of Modern Europe: A History from the French Revolution to the Present Day (Berg, 2007) with Annette Timm, and Drafting the Russian Nation: Military Conscription, Total War, and Mass Politics, 1905-1925 (Northern Illinois University Press, 2003); as well as many articles and chapters on related topics. He’s also a regular contributor to Russian History Blog–his previous posts are all here.

Thanks to David, John Paul, and Willard for taking part in this discussion; to Josh for letting them discuss his book; and to Oxford University Press for facilitating the discussion. I look forward to reading your discussion.