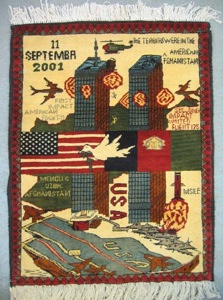 Nineteen seventy nine was a pivotal year in twentieth-century history – as momentous, perhaps, as 1945 and the defeat of the Axis powers in World War II. The Soviets invaded Afghanistan; Iranian revolutionaries seized American hostages in Tehran and overthrew the Shah; Islamic fundamentalists attempted to seize Mecca; and enraged crowds of Pakistanis, goaded on by Islamic extremists, attacked the US embassy in Pakistan. With the benefit of hindsight it is clear that these events signaled a radical break from the Cold War between the Soviet Union and the United States. The world had changed, and a new kind of war had emerged; yet the United States and the Soviet Union continued to fight proxy wars against each other, blinded by their own ideological obsessions and incapable of discerning the new common enemy of Islamic fundamentalism. 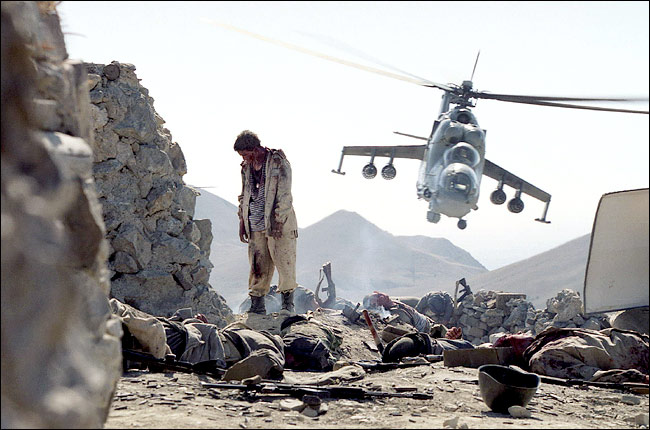 A captivating and timely film tells the story of the ten-year Soviet war against Afghanistan (Afghanistan 1979: The War that Changed the World: http://icarusfilms.com/new2015/afg.html). The war triggered an ever-increasing cycle of violence. Fueled by American and Soviet weaponry – which armed future enemies of both the United States and Russia – Afghanistan became a failed state, creating a power vacuum filled by terrorist movements of various sorts and spreading like a cancer throughout the region. Over a decade more than one million Afghanis died – mostly civilians – and millions more became refugees. At least 15,000 Soviet soldiers fell in battle, and the aura of the Red Army’s invincibility, which had been so crucial to Soviet power and prestige around the world, was shattered. 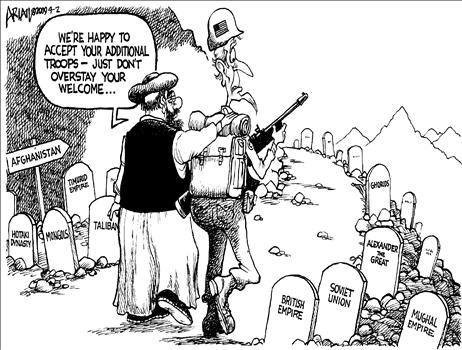 Curiously, despite its enduring and tragic significance, few historians or political scientists have studied the war in depth: the reasons for the Soviet invasion, the conduct of the war, the relationship of the failed war to the eventual collapse of the Soviet Union, and the role of the war in creating the world in which we now live. The primary piece of documentary evidence for the decision to invade comes from a single hand-written page from the Soviet Politburo leadership. The document does not even mention Afghanistan, referring to it as simply country “A,” and it provides little insight into the Soviet decision to send in troops. It is as if Leonid Brezhnev, the Soviet leader at the time, was a kind of Mafia Don, and his fellow Politburo members and generals his mob family bosses. Through various winks and nods – but with nothing concrete or coherent presented as an explanation – Brezhnev let it be known that it was time to do a “hit” on the increasingly annoying and irksome Soviet clients. By comparison there has been far more research and analysis of the war with which the Soviet invasion is often compared –the American Vietnam War – though arguably the Afghan war has had a much greater impact on the course of world history.

Whatever the exact reasons for the invasion, Afghanistan was certainly considered a strategic prize, both for the Soviet Union and earlier for the Russian Empire, when the region became a pawn in the “Great Game” for control between the British and Russian Empires. The Soviets were the first to recognize the new state of Afghanistan in 1919. Relations remained close, as the Soviets attempted to use Afghanistan as a buffer zone between itself and Pakistan and Iran. Only an attempt at radical communist revolution – generated not by the Soviets but independently by more extremist communists within Afghanistan in April 1978 – destabilized the situation. The revolutionaries’ agenda of social, agrarian and economic reform immediately created stiff resistance and polarized the country, radicalizing the political environment and opening the way to more extreme forms of political expression from all sides. Afghani communist officials persecuted religious leaders, causing blowback that drew inspiration from the Iranian Revolution in February 1979 and the Ayatollah Khomeni. As resistance to the new communist Afghani President Nur Mohammad Taraki grew, so too did Afghani appeals for Soviet aid. Meanwhile, the country continued to splinter, as warlords and tribal leaders began to fill the vacuum of power created, unintentionally, by the revolutionary upsurge. 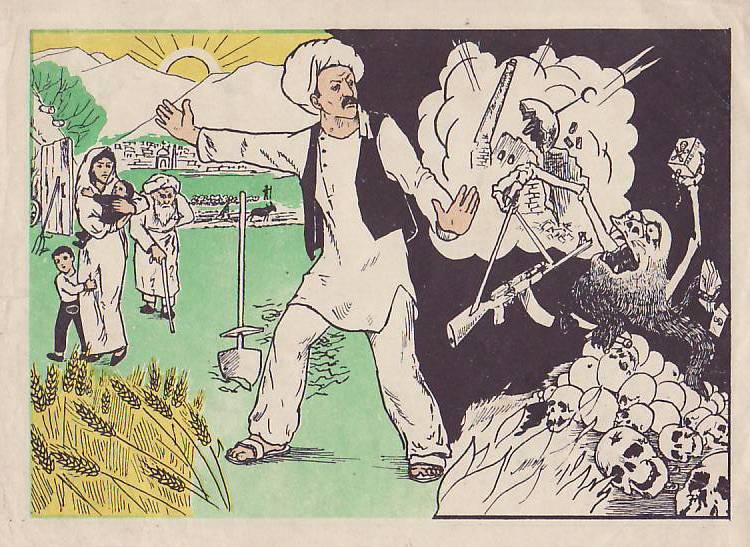 One of the more intriguing claims in the documentary is that Brezhnev’s advancing dementia and lack of stamina played a central role in the invasion. Manipulated by alarmist memoranda from the KGB head Yuri Andropov, and their suggestion that immediate action needed to be taken, Brezhnev assented to intervention – though just what kind and why was unclear, and perhaps will never be known if in fact Brezhnev was not entirely lucid, as seems to have been the case. The seeming success of the invasion of Czechoslovakia in 1968, which Andropov believed produced a more docile and controllable client state to its west, perhaps fed the delusional notion in the Kremlin leadership that Afghanistan, the graveyard of empires, could be just as easily invaded, and with just as few military and political consequences. Eurocentric views of the Afghanis as inferior, similar to US views of the Viet Cong, also seemed to have made the Soviets underestimate their foe. 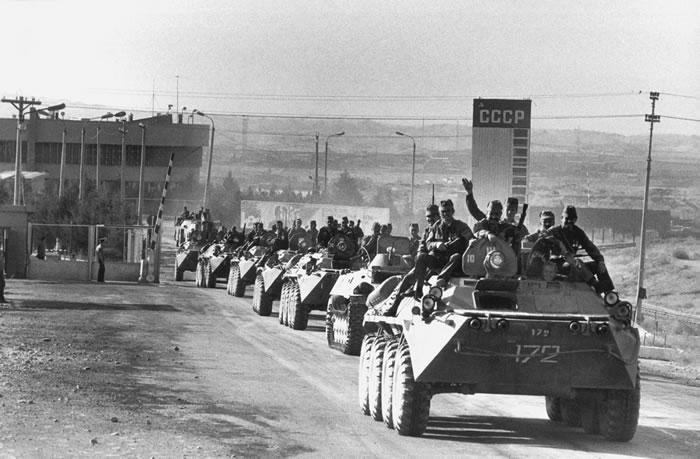 There are many compelling stories and revelations in the film. The Soviets, for example, early on trained Soviet Central Asians to form a special battalion that would wear Afghan uniforms – so that Soviet military intervention could be disguised in May 1979, before the actual invasion in December of that year. The CIA countered, on the borders of Pakistan, with support for anti-communist insurgents. A state of civil war, with various war lords in control of the provinces, emerged by December 1979, when another fateful event occurred. President Taraki’s erstwhile ally and Prime Minister Hafizullah Amin overthrew his revolutionary comrade, commanding his secret police to strangle him. 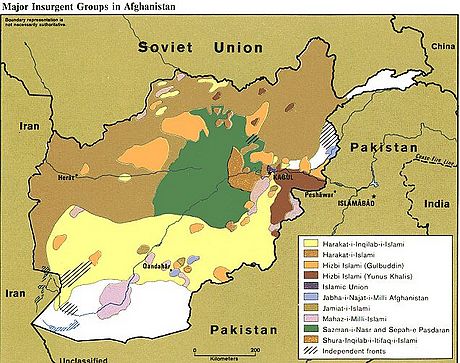 The documentary claims, though it is not clear based on what evidence, that the Soviets believed Amin was an American pawn. In his brief time in power Amin waged a campaign of terror and purges against the dead former President’s real and suspected allies. At one point the Soviet officials in Kabul charged with protecting Amin from a counter-revolution were now ordered by the Soviet secret police to assassinate him and his entourage. They tried to poison the President’s drink at a dinner in the palace – by slipping poison into his Coca Cola, with which the Soviet agents were not yet familiar. Coke, however, was not “it.” It apparently neutralized the poison and the dining party survived! So the Soviets instead bombed the presidential palace to smithereens, sure that they would find evidence that Amin was a CIA pawn (just as, perhaps, the US was sure in its invasion of Iraq that Saddam Hussein was developing weapons of mass destruction). There was no such evidence; Amin was simply a loose cannon — and not even a Chinese spy, as other KGB agents thought might be the case. 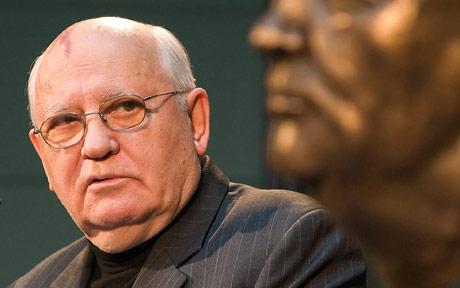 By the mid-1980s it had become clear to Mikhail Gorbachev that the war was a strategic, political, and military disaster. The architect of Perestroika and new political thinking makes a fascinating and typically self-serving appearance in the film. As a young Politburo member, he claims that most of the political leadership was excluded from the initial decision to invade, and that the invasion was a kind of coup orchestrated by Minister of Foreign Affairs Andrei Gromyko, General Dmitrii Ustinov, and Brezhnev. Of course, this position perhaps too conveniently absolves Gorbachev of complicity in the invasion on December 28, 1979. The absence of documented records makes it impossible to say. When Gorbachev in the film proclaims fatefully, “you can’t rewrite history,” it is entirely possible that he is the one doing the rewriting. 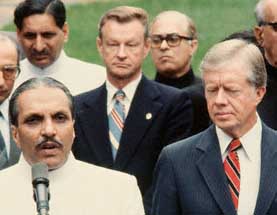 Among other things, the Afghan war derailed the politics of Détente, which Jimmy Carter and his hawkish National Security Advisor Zbigniew Brzezinski decisively ended. Providing lethal aid to the Mujahideen, they intended to make Afghanistan the Soviet Union’s Vietnam, payback for the American nightmare that had only ended five years previously. A boycott of the Moscow Olympics soon followed, as well as termination of broad-ranging intellectual and cultural exchanges — as well as collaboration in space exploration — between the United States and the Soviet Union, all initiated by Nixon and Kissinger.

Especially blameworthy in this story, as recounted in the documentary, is the role of the ideological Cold Warriors of the Reagan Administration, who were determined to defeat the Soviet Union at all costs, even as Gorbachev attempted to rely on the most moderate forces in Afghanistan, in order to achieve a national reconciliation and remove Soviet troops. Reagan’s advisors, gleeful at the humiliations suffered by their ideological foe, armed the most radical Jihadists they could find with billions of dollars of sophisticated weaponry and training, thus creating a kind of hothouse for growing future terrorism. Stinger missiles — handheld anti-aircraft weapons — were given to the Mujahideen, taking down hundreds of Soviet attack helicopters. Sly Stallone exploited the triumphal embrace of the Islamic Jihadists in 1988, producing Rambo III, in which Rambo heads a CIA operation to help Mujahideen blow away Soviet soldiers. Reagan greeted Mujahideen in the White House as partners in defense of religious faith and freedom against Godless commies. 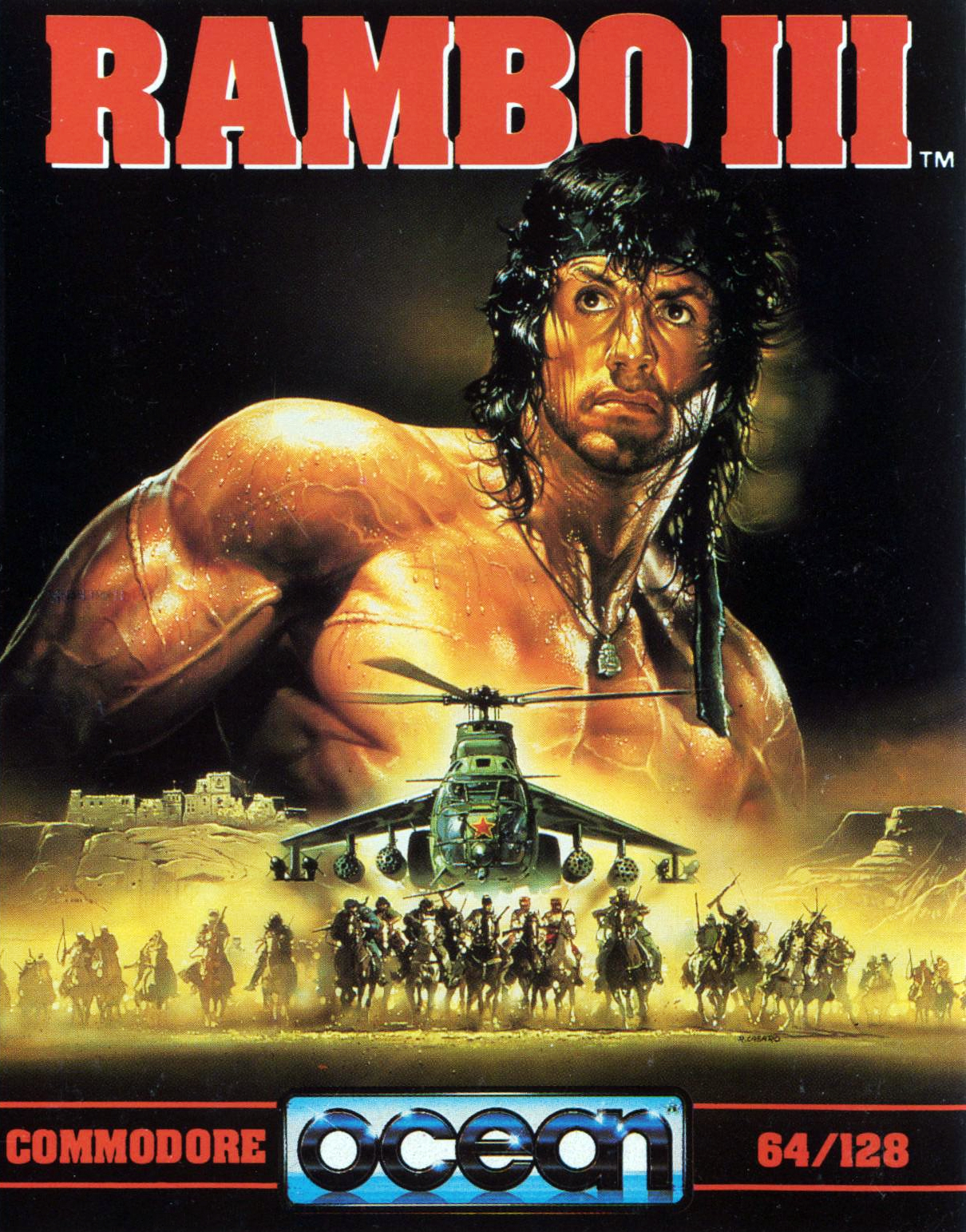 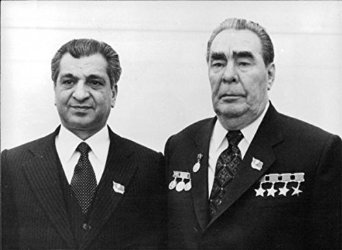 If Brezhnev’s dotage played a role in the initial Soviet invasion, goaded on by hawks within the Soviet military industrial complex, Reagan’s own advancing senility in the mid-1980s allowed Cold Warriors like Richard Pearle, blind to the dangerous implications of their Afghanistan gambit, to enact a fatally-flawed policy in the Middle East. 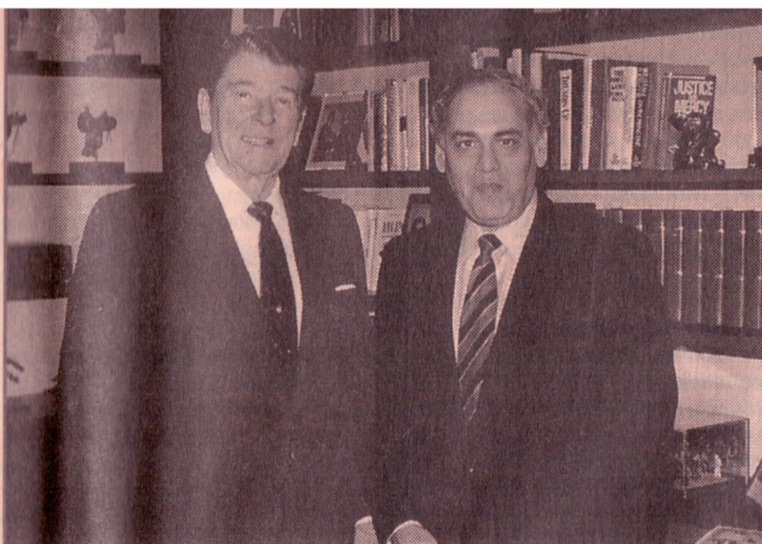 This is a well told story that clearly outlines the series of blunders and missteps that led to the overthrow of Amin, the invasion, the installation of the new Soviet-chosen leader Babrak Karmal and to the many unintended and tragic consequences that resulted – especially for the United States and the Soviet Union, who armed their current and future enemies in waging a proxy war against each other. It contains excellent archival footage as well interviews with important historical figures on all sides of the conflict at the time. This documentary, in short, is a must see for anyone interested in the blunders and miscalculations of both Soviet and American leaders that produced the terror-infested world in which we now live.

3 replies on “1979, the End of the Cold War, and the Law of Unintended Consequences”

Thank you for this very perceptive account, Andrew — 1979 has certainly been reverberating in formal and informal violence across the Indian subcontinent.

Thank you Anindita. There is a popular account of 1968 as a pivotal moment in 20th century world history, though I think that is perhaps overdone. It would be interesting for someone to write a history of 1979, though the skills required to pull this off — archival, linguistic, training in multiple historical fields — would be daunting indeed. The history of the Afghan war, at least as far as I am aware, remains largely untouched by scholars in the field of modern Russian/Soviet history, which no doubt has something to do with archival access, though it would still be possible to tease out the bigger implications — particularly the US blunders, as recounted by the investigative journalist Steve Coll in an excellent account called Ghost Wars.

I found this blog very interesting. The extent of my knowledge of Afghanistan was that they had never been defeated as a people. The point about Reagan wanting to make this war the Soviet Union’s “Vietnam” is quite ironic as it comes full circle with the United States ending up there currently. As you said with hindsight it is easy to see, but during the course of any major events, minute details that can have a significant effect on the future often go unseen.