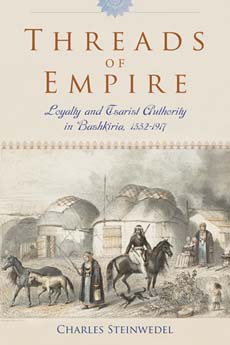 Nicholas Breyfogle, associate professor of history at the Ohio State University, is a specialist in environmental history and in the history of the Russian Empire’s multi-ethnic and multi-confessional borderlands. He is the author of Heretics and Colonizers: Forging Russia’s Empire in the South Caucasus (Cornell University Press, 2005), and is currently working on an environmental history of the Lake Baikal region.

, executive editor of Ab Imperio, is a specialist in the social and imperial history of the late Russian Empire. He is the author of Modernism and Public Reform in Late Imperial Russia: Rural Professionals and Self-Organization, 1905-1930 (Palgrave Macmillan, 2009) and many articles on the imperial dimensions of tsarist rule.

, professor of history at University of Michigan, is most recently co-author with Ronald Grigor Suny of Russia’s Empires (Oxford University Press, 2017), as well as the author of the prize-winning Cartographies of Tsardom: The Land and Its Meanings in Seventeenth-Century Russia (Cornell University Press, 2006).

, Associate Professor at the University of Hawai’i at Manoa, and a contributor to the Russian History Blog, is a specialist in early the early modern Russian empire, and increasingly in histories of consumption and trade. He is the author of The Elusive Empire: Kazan and the Creation of Russia, 1552-1671 (University of Wisconsin Press, 2012) and the co-editor of a number of volumes, most recently Russian History through the Senses: From 1700 to the Present (Bloomsbury, 2016) with Tricia Starks.

, professor of history at the University of Nevada, Las Vegas, is a specialist in the intersection between religion and imperial rule. He is the author of At the Margins of Orthodoxy: Mission, Governance, and Confessional Politics in Russia’s Volga-Kama Region, 1827-1905 (Cornell University Press, 2001) and The Tsar’s Foreign Faiths: Toleration and the Fate of Religious Freedom in Imperial Russia (Oxford University Press, 2014)

And of course, Charles Steinwedel, professor of history at Northeastern Illinois University, and a specialist in Russian imperial history. He is the author of a number of articles on Bashkiria in particular and imperial governance more generally, and is now starting a new project on sugar production, trade, and consumption in late imperial Russia.

Thanks in advance to all our participants for taking part in the discussion, and to Indiana University Press for facilitating it.

Edited 3/2/17: One of the previously announced participants is unable to take part in the discussion.