Thanks to Karl Qualls and Mark Smith for the thought-provoking comments that each has contributed to this discussion of Steve Harris’ Communism on Tomorrow Street.  Drawing on his expertise on (re)construction and urban planning, Qualls raised significant questions about the evolution of prefabricated building, as well as the ways in which the architectural profession strove to reassert its authority after Stalin.[1. Susan Reid discusses the parallel matter of the position of interior design professionals after Stalin in her article “Destalinization and Taste, 1953-1963,” Journal of Design History 10, no. 2 (1997):  177-201.]  Smith, whose work I noted in my initial post, echoed my implicit interest in class.  This is a subject I would like to address further – specifically in relation to the politics of complaint, another strand of scholarship that Communism on Tomorrow Street enriches, as Qualls aptly indicated.

As Smith rightly pointed out, class is a weighty category of analysis bound up in much more than “difference.”  I also appreciated him reinforcing the significance of entitlement and citizenship that I have emphasized in my own study of Soviet housing.  To elaborate a bit, my work has aimed to deconstruct the discourse employed in housing complaints and requests to determine what “home” meant in the aftermath of war and Stalinism, to investigate the contours of Soviet identity, and to explore popular investment in socialism in general.  From these perspectives, demands for better housing certainly reveal more about a broader Soviet subjectivity than about class per se.  Nevertheless, I was intrigued by Harris’ attention to class for the simple reason that the intersection of (socioeconomic) class with consciousness, social identity, values and culture has not enjoyed the same degree of scrutiny in scholarship on the postwar Soviet Union that it has been afforded in studies on earlier periods of tremendous flux.[2. The following pivotal works on class during the New Economic Policy, Cultural Revolution, and collectivization and industrialization are what came to my mind:  Diane P. Koenker, “Factory Tales:  Narratives of Industrial Relations in the Transition to NEP,” The Russian Review 55, no. 3 (July 1996):  384-411; Stephen Kotkin, Magnetic Mountain:  Stalinism as Civilization (Berkeley, 1995); Sheila Fitzpatrick, “Ascribing Class:  The Construction of Social Identity in Soviet Russia,” Journal of Modern History 65, no. 4 (December 1993):  745-770; and Hiroaki Kuromiya, “The Crisis of Proletarian Identity in the Soviet Factory, 1928-1929,” Slavic Review 44, no. 2 (Summer 1985).  Where class in the postwar era is concerned, I should note that Donald Filtzer has provided an impressive portrait of the condition of the working class, and  David Ruffley, of the advancement of Soviet professionals.  See, respectively, Soviet Workers and Late Stalinism:  Labour and the Restoration of the Stalinist System After World War II (Cambridge, 2007) and Children of Victory:  Young Specialists and the Evolution of Soviet Society (Westport, 2003).  Class also figured into various remarks during the fourth blog conversation on Donald Raleigh’s book, Soviet Baby Boomers:  An Oral History of Russia’s Cold War Generation (Oxford, 2011).]

END_OF_DOCUMENT_TOKEN_TO_BE_REPLACED 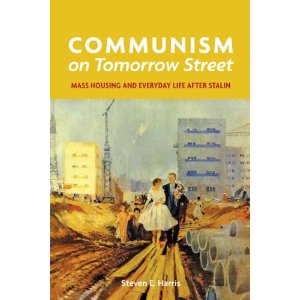 I am delighted to have the opportunity to begin the sixth conversation on Russian History Blog, this one on Steven Harris’ superb book Communism on Tomorrow Street:  Mass Housing and Everyday Life after Stalin.  Its cover, a reproduction of the Yuri Pimenov painting “Wedding on Tomorrow Street,” hints at the muddy portrait of Soviet housing that Harris presents:  construction and settlement occurred not in ordered sequence, but simultaneously, as impatient citizens rushed into housing that was incomplete or had not yet passed inspection; citizens and officials clashed over housing allocation principles; and residents of new neighborhoods found themselves competing for sparse resources, rather than basking in the glow of the harmony that urban planners had plotted out for them.

Communism on Tomorrow Street corresponds with recent historiography displacing the notion that the Thaw constituted a clear break from the Stalin period.[1. For a concise study of general continuity from Stalin to Khrushchev, see Alexander Pyzhikov, “Sovetskoe poslevoennoe obshchestvo i predposylki khrushchevskikh reform,” Voprosy istorii, no. 2 (2002):  33-43.  On parallels in the sphere of housing in particular, see Mark B. Smith, Property of Communists:  The Urban Housing Program from Stalin to Khrushchev (DeKalb, 2010).]  It also contributes to discussions about Soviet engagement with the West in the realm of architecture.[2. Catherine Cooke (with Susan E. Reid), “Modernity and Realism:  Architectural Relations in the Cold War,” Russian Art and the West:  A Century of Dialogue in Painting, Architecture and the Decorative Arts, eds. Rosalind P. Blakesley and Susan E. Reid (DeKalb, 2007), 172-194.]  And, it addresses the implications of socialist consumption, contemplating the position of the collective good in a society where taste and desire were beginning to be afforded as much attention as need.[3. This is a key theme, for example, in Communism Unwrapped:  Consumption in Cold Eastern Europe, eds. Paulina Bren and Mary Neuberger (Oxford, 2012).]

Rather than describe how Harris directly addresses each of these strands of scholarship I would like to highlight the novel ways in which he enters into dialogue with them.  First, in considering the basic historical question of continuity, Harris does not limit himself to the Soviet context.  Instead, he ventures into the 19th Century to firmly situate Russian social policy, the foundation for Bolshevik approaches to the housing question, in the pan-European context.  Secondly, he depicts a solid link between material culture and social ideals; this is most striking in his meticulous study of why the separate apartment came to be small, an account that dispels general presumptions related to economizing.  Thirdly, Harris offers rich insights into a crucial facet of the revival of socialism under Khrushchev that has escaped rigorous scrutiny:  egalitarianism.  As such, he adds another important barometer of the Thaw to those that have already received a fair amount of scholarly attention, for example, liberalization in the sphere of arts and literature, and socialist legality.[4. On the intelligentsia during the Thaw, see Stephen V. Bittner, The Many Lives of Khrushchev’s Thaw:  Experience and Memory in Moscow’s Arbat (Ithaca, 2008) and Denis Kozlov, “Naming the Social Evil:  The Readers of Novyi mir and Valdimir Dudintsev’s Not by Bread Alone, 1956-59 and Beyond,” The Dilemmas of De-Stalinization:  A Social and Cultural History of Reform in the Khrushchev Era, ed. Polly Jones (London, 2006), 80-98.  Socialist legality is central to Brian LaPierre, Hooligans in Khrushchev’s Russia:  Defining, Policing, and Producing Deviance during the Thaw (Madison, 2012) and significant also in Miriam Dobson, Khrushchev’s Cold Summer:  Gulag Returnees, Crime and the Fate of Reforms After Stalin (Ithaca, 2009).]  In fact, issues related to equality constitute the thread that, to varying extents, connects each of the points I wish to present.