Thank you to Steve Barnes and to Steve Harris at the Second World Urbanity blog for organizing this forum.  And a special thanks to Alan, of course, for allowing his fascinating book to be discussed in such fashion.  To start my own contribution to this conversation, I would like to offer focus on two themes: the re-adjustment of prisoners after release and the idea of the “Company Town.”

To me this book offers two central contributions. First, it explores in intimate detail the porous boundaries between freedom and unfreedom, showing how patronage networks and economic realities created a town with a surprisingly high level of interaction between prisoners and non-prisoners.  Wilson Bell has begun this discussion, so I will not discuss it further here.  Rather, I would like to focus on what I consider to be the second and no less important contribution: the transition of Vorkuta to a non-Gulag (or only lightly-Gulag) city.  After Stalin’s death, the Gulag was vastly reduced in size, and most of the large camp complexes, including those around Vorkuta, were dismantled.  Alan provides excellent detail on how the municipality and economic structures of Vorkuta were able to manage this transition.  Of particular concern were the related issues of released prisoners and labor shortages.

Scholars of the Gulag have long told tales of how difficult it was for released inmates to readjust to society after many years behind barbed wire. This has been treated at length by Nanci Adler, Anne Applebaum, Orlando Figes, Miriam Dobson, Amir Weiner, and others.  Yet Alan presents a picture that is to a large extent different from theirs.  Sure, he tells of some job discrimination and other barriers to re-entry.  But he also writes about how many inmates, upon release, stayed in Vorkuta, the very place where they had been incarcerated.  Given the opportunity to leave, they chose to continue(!) building their lives at the site of their punishment.  And many, he claims, were able to forge (pardon the Soviet terminology) fruitful lives marked by meaningful employment and valued social networks.  To me the take-away point here is this: re-adjustment to society after incarceration is difficult in any society.  Ex-cons globally are marked by social stigma and often beset with certain legal disabilities (not that you will find much acknowledgement of this in discussion of former inmates in the Soviet Union).  Perhaps, if we are to believe that Alan’s conclusions can be extended Union-wide, the Soviet Union was not (much?) worse than other regimes in this regard.  Certainly the scale of the problem was much larger, with millions being released from the Gulag in the 1950s.  But qualitatively, we may be led to the conclusion that released (non-political?) prisoners in the USSR fared no worse on average than those released from American, Brazilian, French, South African, Indian, or Japanese prisons.  That is a provocative conclusion and I’d like to hear Alan’s, and others’, thoughts on the matter.

The second question that I would like to briefly raise is that of the “Company Town.”  This term, I think, should have been given more theoretical and comparative discussion, seeing as how it stands in the title of the book.  It is a concept that is non-Soviet in its origins, and its applicability to the Soviet Union is questionable, seeing as how one could broadly define every town in the USSR as a “company town” under Sovnarkom.  Or if Alan chooses a more narrow definition, why is the work of Stephen Kotkin (Magnetic Mountain) or Kate Brown (Plutopia) not engaged (Alan mentions them only briefly)?  I wonder if others, particularly those at the Second World Urbanity blog, have further thoughts on this question.

I look forward to a fruitful discussion.  Please comment in the space below! 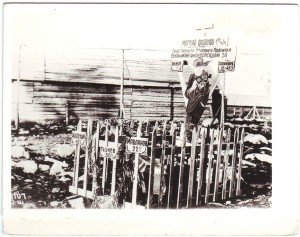 END_OF_DOCUMENT_TOKEN_TO_BE_REPLACED

Gulag Boss is clearly a valuable contribution to the growing body of Gulag literature.  For decades our understanding of the Gulag was informed almost exclusively by prisoner memoirs.  Then in the 1990s and 2000s came the archival revolution, which provided a wealth of information about the internal workings of the Soviet penal system.  But although they have taught us much over the past two decades, archival documents will never present the full picture of how the administration of punishment worked in the Soviet Union; they lack, for the most part, the candid voices of the actual administrators explaining how to properly interpret the documents.  Which orders were important?  Which orders were ignored?  How were promotions and disciplinary actions really decided?  What personal intrigues stood behind such actions?  Were some commands given orally rather than in written form?  Were there motivations behind certain decisions that were not printed on paper, or which among the given motivations carried the most weight?  What did Gulag commanders and guards really think of their work and of the prisoners?  These are questions that are sometimes answered in investigatory reports and petitions, but often the historian is left guessing.  And it is precisely these sorts of questions that memoirs or oral histories of Gulag personnel can help answer.  They can provide a sort of bridge between the prisoner accounts and the official documents.  Unfortunately, historians have at their disposal very few such sources and this is where Gulag Boss is particular valuable.  One only wishes it were three times as long and detailed as it is.

So what do we learn from Gulag Boss?  Or, what do we already know about the Gulag that is reinforced by this memoir?