Our panel of distinguished commentators have raised a number of very interesting points related to Eric’s book. Alison wonders whether the emotional aspect of citizenship and the decision where to live might well be worth additional consideration. Her post and Eric’s response highlight some methodological issues that confront researchers addressing these themes, but I think there is more to say on this issue. Students of nationalism and national identity have long tried to come to terms with the affective aspects of the phenomenon. I find myself wondering now more acutely how questions of citizenship intersected with nationalism on the “emotional plane.” This is a question not only for Eric, but for all of our blog readers.

Similarly, I am thinking much more about the question of economic autarky and physical borders as a result of the posts of Ari, Golfo, and Andrey. Ari suggests that the intensifying global restrictions on migration and citizenship in the interwar period might have played a role in Soviet practices of autarky. Golfo was struck, as I was, by Eric’s tale of the victorious police lobby in the early Soviet period and by the link between ascendant police forces and tighter border controls. Andrey, on the other hand, issued a thoughtful challenge to the very premise that the Soviets wanted to pursue autarky. He aligns himself with Michael Dohan’s argument that the decline in foreign trade was the result not of a Soviet intent to isolate their own economy, but from a collapse in exportable goods (such as grain) and the isolationism of Depression-era capitalist states. At the same time, Andrey warns us not to think of the increasingly militarized Soviet border as a means to enforce blanket restrictions on emigration but as a result of particular campaigns related to specific security concerns. He expresses doubts about consistent anti-foreign sentiments during terror campaigns as well and suggests that, much like Eric’s description of the imperial situation, these police-state measures were often “separate deals” as well.

We have a number of concepts floating around in time-sensitive relationships with each other: citizenship, nationalism, protectionism, autarky, capitalism, globalization, migration, and border, to name a few. Again, I would like to know if blog readers have thoughts on these issues, even if they have not yet had the opportunity to read Lohr’s book.

Two weeks ago, the U.S. Senate passed the “Border Security, Economic Opportunity, and Immigration Modernization Act of 2013.”  The bill’s opening provisions call for doubling the size of the Border Patrol to about 40,000 agents, completing 700 miles of fencing along the southern border, and expanding the use of radar and drone surveillance.  If approved by the House of Representatives, this effort, estimated to cost between 40 and 50 billion dollars, would constitute arguably the most ambitious peacetime border buildup in history.  Those unfamiliar with the politics of U.S. immigration reform may be forgiven for wondering that the proposed legislation is aimed not to secure the country from infiltration by al-Qaeda terrorists, but to turn the country’s estimated 11 million undocumented immigrants into U.S. citizens.  It thus seems a particularly auspicious time to consider Eric Lohr’s exploration of the historical relationship between another major state’s efforts to manage its physical borders, its “citizenship boundary,” and the presence of foreigners on its territory, and I am grateful to Josh and Eric for giving me the opportunity to engage with these dimensions of Russian Citizenship.

One of Lohr’s original arguments, however, is about the relative insignificance of the physical border as a demarcating line between the tsars’ subjects and foreigners for most of Russian history: in contrast to countries such as Australia, Britain, Japan and the United States, “where water boundaries facilitated a close association between the physical and citizenship boundaries,” the “physical boundary around the [Russian] empire was not central to the subjecthood boundary.”  While access to U.S. citizenship was “controlled more by Ellis Island gatekeepers than by naturalization laws and regulations,” in Russia “the site of actual control was less along its thousands of kilometers of external border than in the form of documents issued in bureaucratic offices, and inducements, sanctions, and other measures that gave certain groups incentives to migrate or change their citizenship status.”  In short, “[u]ntil the 1920s, the lengthy borders of the state were hardly relevant to controlling movement.” (1, 26-27, 177).

This is a bold claim, and Lohr marshals some compelling evidence to support it.  The figures on illegal emigration offer perhaps the starkest illustration of the porosity of the Empire’s borders: “[b]y the turn of the century, Russian officials estimated that somewhere between half and 90 percent of all emigrants left illegally,” eschewing the expensive and time-consuming process of acquiring a zagranpasport. (94-95, 239n50)  Moreover, “millions of small traders, nomads, and migrant workers were entering and leaving the Russian Empire without documented checks every year.”  At least as far as its borders were concerned, the answer to the “perennial question” about “the paradox of the Russian state” – “[w]as it weak or strong?” –  seems plain enough.  (177)

END_OF_DOCUMENT_TOKEN_TO_BE_REPLACED

Like Alison, I want to begin by thanking Josh and Eric for allowing me to participate in this conversation.  It was a pleasure to read this excellent book and, even more so, to have a chance to engage in this dialogue about it.

To begin, it was fascinating to see some of the issues I have worked on in German history through the very different perspective of Russian history.  For example, while autocratic leanings and restrictive citizenship laws have often operated in tandem in Germany, some of Russia’s most autocratic leaders were the most invested in the “attract and hold” policy, which brought foreigners to Russian soil.

END_OF_DOCUMENT_TOKEN_TO_BE_REPLACED

I’m going to use this opportunity to speak to the Soviet side of Eric’s wonderful book, and to the way his research helps us to better understand the Soviet Union.  Yesterday, in Eric’s comment on Alison’s thought-provoking essay, he said he tried to explain the policies of his subjects using a kind of rational cost-benefit analysis.  It’s almost a cliché that the Soviet leadership did many things that—from a purely economic point of view—proved highly irrational.  Although building socialism (the very goal of the regime) was tantamount to industrialization, Soviet citizenship policies did not do much to advance the goal of economic growth.  Security concerns consistently trumped the needs of economic modernization.

Eric writes that, in the Soviet period, “the old regime formula of ‘attract and hold’ had been reduced to ‘hold.’” (179)  At the same time, the two regimes pursued “hold” in different ways and for different reasons.  The imperial regime believed it had a shortage of labor, while the Soviet regime did not.  The Soviet Union’s “hold” was not motivated by a desire to maintain a valuable labor force.  As we all know, the party leadership behaved (especially in the 1930s) as if it had an endless supply of labor.  The Soviet agricultural labor force never recovered from collectivization and dekulakization.  During the Great Terror, the regime shot three quarters of a million people, many of them able-bodied and skilled workers, the very kind the economy desperately needed.  The Soviet regime was not holding in people because it valued laborers.  Rather, “hold” (it seems) was about maintaining secrecy and security.

END_OF_DOCUMENT_TOKEN_TO_BE_REPLACED

Thanks to Josh for inviting me to take part in this blog conversation, and to Eric for allowing us to read and discuss his book. It’s a pleasure to write about a book in a way that’s less formal and more conversational than a book review. In particular, I found myself thinking about Eric’s book on a personal, as well as on an academic level, something that’s hard to talk about in more formal settings.  But here I can note that this topic holds particular resonance for me, in part because my Lithuanian great-grandmother was one of the emigrants from late Imperial Russia whose life was affected by the policies he describes, and also because I myself, as an American living and working in Canada, have thought much more about citizenship, borders, and the act of naturalization in recent years.

END_OF_DOCUMENT_TOKEN_TO_BE_REPLACED 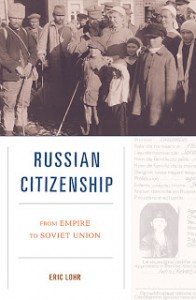