My post is about a film festival that was held on my campus on March 18. We screened three documentary films by documentary filmmaker Marina Goldovskaya. I emerged from the event, and also after reading her autobiography, convinced of the importance of the documentary in understanding recent Russian history. 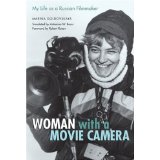 Goldovskaya — who was at the event and commented on the creation of her films — has a unique talent for finding subjects. Her subjects are ideal microcosms that provide a window into larger issues and themes. She adds to that talent an uncanny ability to draw her interviewees out on camera. She rejects the term “interview”and refers to her subjects as “characters.” She calls her interactions with the protagonists of her film “conversations.” Goldovskaya somehow manages to maintain an unobtrusive presence in her films. The setting for her conversations is often the apartment kitchen. She films her subjects as they chop onions, slice bread, and open their souls, as Russian so often do, around the cramped but cozy kitchen table. Her 1993 film (The House with Knights, 58 minutes) explored a famous house on the Moscow Arbat. It was so named because of the distinctive statues of knights in niches outside the grand structure. Built in the early 1900s as an apartment building for the rich and privileged, it was parceled into communal apartments after 1917.