Having just finished my last classes for my modern Russia survey, I wanted to share some thoughts on a documentary that I used to discuss Post-Soviet Russia. The 2008 documentary is entitled The Lost Colony. For a clip, see: http://hotdocsaudience.bside.com/2008/films/thelostcolony_hotdocs2008. 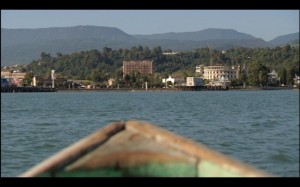 The action takes place in the tiny sub-tropical region of Abkhazia on the coast of the Black Sea. While Abkhazia is ostensibly a part of the post-Soviet nation of Georgia, it has been a de facto protectorate of Russia since the early 1990s.

END_OF_DOCUMENT_TOKEN_TO_BE_REPLACED

So, my YouTube of the Week feature would be better if it was actually a weekly feature. Unfortunately, a bit of illness has kept me offline for much of the last few weeks. So, when the YouTube of the Week last appeared, I shared one of my students’ favorites–I Want a Man Like Putin. I find when it comes to Putin’s “cult of personality,” that I have to stop myself from taking up an entire class period with all the great video footage. This was a new one for me last fall, though, that I just can’t help but share. As in many videos that I show in class, the students need no translation.

When I began my study of Yuri Gagarin many years ago, my biggest challenge, as any historian who has worked in Russian archives can appreciate, was getting access to sources. Gagarin was and remains not just a Soviet icon — but a Russian icon, manipulated and exploited for various patriotic purposes by Soviet and post-Soviet governments. That is especially the case with the fiftieth anniversary of Gagarin’s flight less than two weeks away. Vladimir Putin has personally chaired the organizing committee for celebrations. Relatives, cosmonauts, government officials, museum workers, and curators have arranged the proverbial wagons around Gagarin to protect him from any attempt to tarnish his image — either those based on historical evidence or those concocted from urban myth and hearsay (the main source of information about Gagarin for many journalists, as noted in my previous blog).

END_OF_DOCUMENT_TOKEN_TO_BE_REPLACED

Students absolutely adore all of the fun you can have talking about the cult of Putin.  Perhaps none are as fun as this well-known video of “I Want a Man Like Putin.”  This particular version includes English subtitles.

I use the video every semester that I teach post-1945 Russian/Soviet history as it follows a few classes after other videos of Boris Yeltsin’s drunken and seemingly senile escapades.  This video then encapsulates a part of why Putin and the sober, stable 2000s are so much more popular than Yeltsin and the drunken, chaotic 1990s.