Posted on February 10, 2012 by Matthew Romaniello

My name is Matt Romaniello, and I’m excited to be joining the Russian History Blog.  I’m an assistant professor of history at the University of Hawai’i at Manoa, and the associate editor of The Journal of World History. I specialize in the Russian Empire, and comparative empires more generally.  While my research has focused on the sixteenth and seventeenth centuries, I’ve followed the history of the Russian Empire into the post-Soviet era to see how relations between Russia and its non-Russian subjects have, or have not, changed.

My first monograph was just published last month by the University of Wisconsin Press.  It explored the gradual incorporation of Muslims and animists into the Russian Empire after the conquest of the city of Kazan’ in 1552.  While I was finishing my book, I began work on two other projects, both of which I’m looking forward to expanding soon.  The first is an examination of tobacco’s arrival and spread in Russia, which went from the world’s longest ban on tobacco imports in the seventeenth century, to the widespread use of tobacco by the nineteenth.  The second is an exploration of Russia’s view of Islam, see not only through Russia’s relationship with its internal populations of Muslims (as in my book) but also in its experiences with the powerful Muslim empires in the Middle East and South Asia. 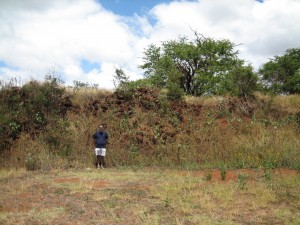 Me standing at the walls of Fort Elizabeth, Kauai

I’m planning to blog about these projects, but also to discuss some points of local interest.  The first is Russia’s role in the Pacific, beginning with the “Russian fort” on Kauai, and moving to Russia’s involvement in China, Alaska, and California.  The second is about teaching Russian history, and hopefully opening up a discussion about new resources, ideas, and opportunities for students, as I did a bit earlier in my career.

2 Responses to Aloha from Hawai’i