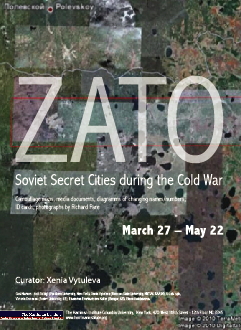 A few weeks ago, on March 27, I was at a reception at the Harriman Institute (for Russian, Eurasian, and Eastern European Studies) at Columbia University for the opening of a new exhibit entitled ZATO: Soviet Secret Cities During the Cold War. The exhibit, which will be on display until May 22, was curated by Dr. Xenia Vytuleva, an architectural historian who did her graduate work at Moscow State University and is now visiting at Columbia. The exhibit includes images, diagrams, maps, and documents, some of it provided by Richard Pare, the English photographer well-known for his work on Soviet modernist architecture. Dr. Vytuleva has done an exemplary job of visually communicating the essence of the “closed cities” and I encourage all in the New York area to come and see her superb work.

My contribution to the project was to provide the historical text (and context) and to help conceptualize an exhibit ostensibly designed to render visible a phenomenon that was largely about invisibility. I provide here a brief summary of some of my thoughts that fed into the ZATO exhibit and the ways in which we might begin to situate the “secret cities” phenomenon on the social and political geography of the former Soviet Union. On a very cursory level, these cities are no mystery. Consider the official designation that created this typology of urban life: the Closed Administrative-Territorial Formation (Zakrytoe administrativno-territorial’noe obrazovanie, ZATO). All of these words hold certain meanings, but they all communicate a sense of boundaries, demarcations, limitations, and circumscriptions on the social and political geography of the Soviet Union. At a deeper level, the language of secret cities is also one of omission, most starkly demonstrated by the fact that the cities themselves were never shown on official maps produced by the Soviet regime. Implicated in the Cold War posture of producing weapons for the Soviet military-industrial complex, these cities were some of the most deeply secret and omitted places in Soviet geography. Those who worked in these places had special passes to live and leave, and were themselves occluded from public view. Most of the scientists and engineers who worked in the ZATOs were not allowed to reveal their place or purpose of employment. Again, this omission.

If the secret cities can be seen as a phenomenon of omission, they can also be understood as spaces of exclusion. Much like other social spaces that were highly exclusionary—such as the Gulag—passage in and out of these urban “formations” was very strictly regulated, even for people who lived within. Yet, what made them different from the Gulag was, of course, the intersection of exclusion and privilege. For Soviet intelligentsia—particularly scientists, engineers, and technicians—secret cities represented aspirational spaces, idealized urban formations where the day-to-day amenities of life were seemingly abundant and plentiful. In these markers—exclusion, omission, and privilege—we see the secret cities functioning as metaphors for the place of knowledge in Soviet civilization. Knowledge—and information—was excluded, omitted, and privileged, according the often arbitrary codes of the Bol’sheviks, creating a system of secrecy at the political, social, and cultural levels that affected every Soviet citizen. Activities from the most anodyne to the most dissident acquired and lost meaning when they were confronted with the boundaries of acceptable discourse.

Much of the discourse surrounding the secret cities has centered on Cold War imperatives and pressures; this was a story of the Soviet military-industrial complex.[1. For some useful social science and history literature, see Richard H. Rowland, “Russia’s Secret Cities,” Post-Soviet Geography and Economics 37.7 (1996): 426-462; Ira N. Gang and Robert C. Stuart, “Where Mobility is Illegal: Internal Migration and City Growth in the Soviet Union,” Journal of Population Economics 12.1 (1999): 117-134; Cynthia Buckley, “The Myth of Managed Migration: Migration Control and Market in the Soviet Period,” Slavic Review 54.4 (Winter 1995): 896-916; David Shearer, “Elements Near and Alien: Passportization, Policing, and Identity in the Stalinist State, 1932-1953,” Journal of Modern History 76.4 (2004): 835-881] But an obvious touchstone for the ZATO, especially in terms of secrecy, was the Gulag. Everything about the Gulag, its institutional structure, the scope of its camp system, how it operated, how many prisoners labored as part of it, where it was located—all of these were considered secret. The Gulag archives are, in fact, replete with directives whose sole goal was to ensure occlusion from public view. Like the ZATOs, the Gulag camps that dotted the Soviet landscape were also omitted from official Soviet maps.

Once the ZATOs began to emerge on the topography of Soviet maps in the late 1980s and early 1990s, they immediately became the object of study for Western security studies scholars (interested in weapons proliferation) and environmentalists (who were concerned with the effects of nuclear and industrial waste). Their concerns are certainly legitimate but it has been equally exciting to see humanities scholars and social scientists exploring other aspects of the ZATO phenomenon. New work among others by Victoria Donovan (who is studying migration) and Ekaterina Emeliantseva hold much promise to add to what has so far been a relatively straightforward recounting of facts. Much in the mode of this new work, the Van Alen Institute is hosting a discussion on May 15, 2012 on the theme of “ZATO: Secret Soviet Cities During the Cold War.” Present will be Jean-Louis Cohen, the Sheldon H. Solow Professor in the History of Architecture at NYU, Xenia Vytuleva, Richard Pare, and myself. On the same day, the Harriman Review will issue its Spring/Summer issue containing an essay by me proposing a conceptual framework for the study of ZATOs in the context of the history of secrecy in Soviet civilization. We hope that this will be the beginning of further discussion on the history and urban ecology of the phenomenon of closed cities.

5 Responses to ZATOs In View