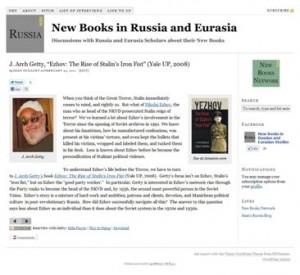 For some time now, I’ve followed and listened with great interest to Marshall Poe‘s terrific series of podcast interviews at New Books in History.  Poe, a historian of early modern Russia, interviews a wide variety of historians including many in Russian history.  Poe is in the process of launching the New Books Network including a variety of more specialized interview channels with their own hosts.  I could not be more pleased to see that Sean Guillory of Sean’s Russia Blog has launched the New Books in Russia and Eurasia channel.

Guillory’s first interview is with J. Arch Getty.  They discuss Getty’s 2008 book Ezhov: The Rise of Stalin’s “Iron Fist” (Yale UP, 2008).  This series will be an excellent resource for scholars and students alike.  Hopefully it will also bring some of the best scholarship in our field to a wider audience.