I’ve gotten several interesting responses to the first post on atrocities: on this site, in private communication, and on the listserve of the International Society for First World War Studies.  Many of those comments have related to the issue of rape in wartime.  One knowledgeable respondent offered the suggestion that the officers (esp. Gen. Gurko) would not have known that the straggling soldiers had been raping the locals.  Rape, he argues, was a capital crime in the Russian army and was “unlikely to be shrugged off at this early stage.” Another respondent found this interesting and asked whether the Russian army was unusual in its attention to crimes against women and whether anyone was ever punished for it.  A response, with a couple more translations, may help to develop this question further.

First, was rape (изнасилование) a capital offense in the Russian Army?  I believe the answer is “yes” if we mean by this that a soldier could be executed for raping a civilian, but “no” if we mean by this that the violation of women constituted a special class of crime for military commanders and prosecutors.  Instead, rape is often mentioned as one of a series of bad crimes. For instance, in a slightly different context, General Ivanov issued an order in 1915 clarifying that certain types of crimes committed by civilians on other civilians in war zones would be prosecuted according to military codes, to wit: “intentional homicide, rape, robbery, arson. . .” (General Ivanov, Order no. 1198 to armies of the Southwestern Front (15 September 1915), Central State Historical Archive in Kiev, f. 1439, op. 1, d. 1667, l. 181). In terms of crimes committed by soldiers, offenses of this type were often lumped under the blanket term of “marauding” (мародёрство), which was indeed a capital crime

Second, was marauding taken seriously and prosecuted by top Russian commanders?  Again, the answer is yes.  Political and military leaders alike were well aware of the dangers of marauding troops.  Indiscipline hampered the cohesion and fighting ability of the troops (remember Subbotin’s drunk and hungover men in the midst of battle).  Equally importantly, abusing civilians complicated military occupation, not only in East Prussia, but especially in Poland and Galicia, where the Russians were trying to win “hearts and minds.” So top commanders tried to stop it.  Here is Rennenkampf after the very first battle of the war: 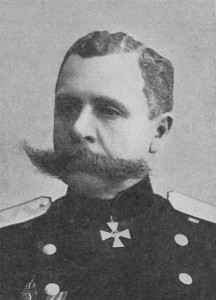 There were a lot of stragglers.  Some were footsore, but many were straggling of their own volition, with the aim of robbery.  I require every unit commander, on his own personal service responsibility, to stop all absences from the line, which lead to marauding.  Do not flinch from using the most severe measures, up to and including immediate shooting on the spot.”

Shortly afterwards, Rennenkampf made a point of announcing the execution of four soldiers for marauding, trying to make his seriousness clear.

However, as I have argued elsewhere, this strategy of “swinging big sticks from far away” was ineffective.  Stopping rape and marauding depended upon strong leadership from junior officers and NCOs.  In some places this was present.  In others it was not.  This was another expression of the core problem of the Russian Imperial Army, the problem that Bruce Menning has identified as one of “linkages.” Policies made with serious intent at the top of the structure were not systematically followed by the people on the ground.  This is, of course, a problem with any army (or any large organization, for that matter), but it was particularly acute in the Russian Army.  To return to the case related by Subbotin, for instance, we might note that the officers who ran into the stragglers on August 8 had already received Rennenkampf’s order from August 6 alerting them that many stragglers were involved in “marauding.”  Those officers did little to investigate the situation, despite Rennenkampf’s assertion that their own personal duty was at stake in finding out what these cavalrymen were up to.  So no, General Gurko probably didn’t “know” that the men were straggling because they were raping girls in the field, but he had reason to suspect it and did not appear to want to expend the energy necessary to implement Rennenkampf’s orders conscientiously. This is how those “linkages” got broken.

One other corollary about poor linkages is that any discussion of life in zones occupied by the Russian Army has to acknowledge that conditions could differ widely from town to town. For a sense of this difference, let me offer one more translation, this from the memoir of a Russian cavalry officer published in Belgrade in 1933.  This account is much different from that offered by Subbotin.  The difference might be accounted for by the fact that this is the memoir of a White émigré intent on promoting a positive vision of Russian troops during the war, it might be the result of Sergeevskii entering East Prussia several weeks after the initial invasion, or it might simply be that the first commanders and soldiers to arrive in the town of Lyk were more disciplined than those in Stallüponen or Marusken.  Here, in any case, is his account:

“At about one in the afternoon (on August 25) we crossed the state border. While we were approaching it, Russian villages stretched out along both sides of the highway.  They were clean but very modest peasant  houses. Near the last of them, on the very edge of the road, a black two headed eagle was hanging on a white, black, and yellow pole.  About thirty paces further, almost the same pole was lying on the ground, but with a one headed eagle. From here forward it was a German street in the village of Gross-Prostken – large two-story buildings, little gardens with iron trellises, excellent services, roads, and so forth. The difference between the Russian and the German villages was truly amazing.  But after all it was true – we were already “in another kingdom, in a different state.”

Another few minutes of fast riding and we arrived in Lyk, which had been under our occupation for two weeks.  The town was still completely untouched by the war.  The streets were full of people, all the stores and cafes were open.  Upon our arrival in the city, two ladies in white dresses very sweetly waved their handkerchiefs at us.

Music was playing in the center of the city. A column of troops came onto the main street from a side street with an orchestra playing and a banner flying; alongside of them, around the orchestra and banners a crowd of German kids was marching along and singing.  The regiment marched as if on parade.  The bright August sunlight gleamed on the Russian bayonets.  But where was the war? . . .

We stopped and learned from a passer-by that in the depths of the garden, behind the guardhouse, there was a large school building of some kind.  We went there. The building appeared to be totally empty. I decided to take it for the corps staff. Entering the vestibule, I called out.  An old door-woman came out. She was pale and was shaking so hard from fear that she could hardly speak.  It was the first time that I really sensed that we were in an enemy country.”